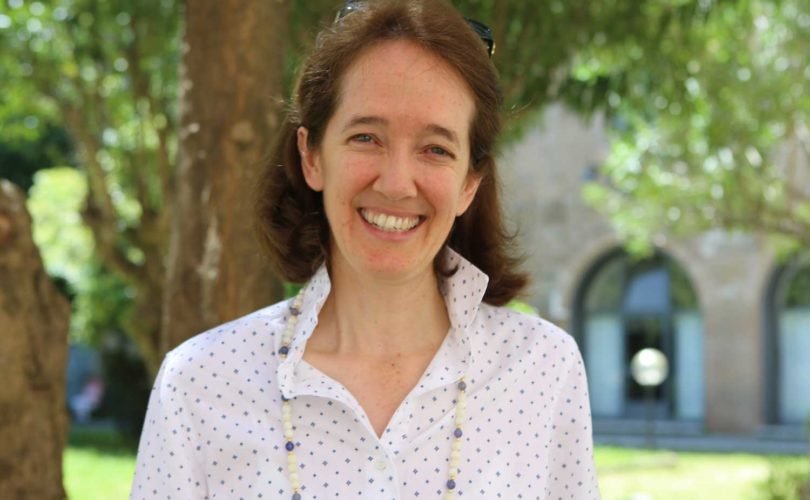 ROME, May 1, 2018 (LifeSiteNews) – Italian pro-life activist Virginia Coda Nunziante has been described as “the Nellie Gray of Italy.” As president of the Associazione Famiglia Domani, she is the country’s leading pro-life voice, mobilizing Italians to stand up for life amid the country’s increasingly secularized culture.

In what is perhaps demonstrative of the unity of the pro-life movement around the world, we connected late last week after returning from a morning prayer vigil for Alfie Evans outside the British Embassy in Washington, D.C. Ms. Coda Nunziante was getting ready to leave her home to attend an evening candlelight vigil for Alfie in St. Peter’s Square in Vatican City.

Ms. Coda Nunziante is zealous about the need for public witness, saying, “We cannot and must not leave the public square only to our adversaries.”

“We must also create a movement of opinion in Italy that you can hear and that is not ashamed of going into the public square,” she added. “Catholics must make their voices heard and reaffirm that there is no possible compromise on non-negotiable values.”

“We are leaving during these days (We have lived in these past few days) the case of little Alfie: We must be well aware that if we do not react now, infanticide will become the norm in our country,” she asserted. “The demon is no longer satisfied with the blood of millions of victims in the womb of their mothers: now things have passed to the next step, the killing of infants. It is the new holocaust that the devil demands to be offered to him by modern man.”

Has there been any substantial movement toward pro-life policies by the Italian government or in the attitudes of the people of Italy as a result of the 2017 Rome Life Forum and 2017 March for Life?

Thanks to the March for Life, which will be held in Rome on Saturday 19 May for the eighth time, every year the mobilization of people, movements and associations that place the value of non-negotiable principles at the center of their public testimony grows in Italy. Even public opinion shows more and more sensitivity to this general theme and in particular to that of abortion, which in our country, in its various forms, has exterminated over 6 million people in the course of 40 years.

Not to mention the very widespread use of contraceptive methods, which have prevented the birth of millions and millions of people, and is contributing to the demographic decline, the aging of the population and the ever greater risk that a real replacement of the population will take place, with the arrival in our country of a huge mass of immigrants every year. The first positive result of our initiative, which has been repeated every year since 2011, is the spread of awareness that abortion, in addition to being an unspeakable tragedy for women, is murder, and that life must be respected from conception to natural death. Our political class has not yet heeded the demands of the pro-life movement, which manifest with conviction and tenacity the principles of the natural, and therefore divine, order.

Late last year you were one of the “Pledge of Fidelity” signatories. What motivated you to sign it?

I think it was very important and meaningful to sign that document. As for me, I did it with great conviction. For two fundamental reasons: the need to reaffirm the Truth about life and family at a time when messages of confusion and discord are coming from the Church; secondly, the duty of the laity to intervene when the Truth is blurred or endangered: if nobody reacts, the only message that remains and lives on is ambiguous.

From this point of view, I do not really understand the criticisms of a certain isolated individuals in the pro-life community towards this dutiful and filial initiative, which has received signatures from around the world. It is the duty of the Catholic, as taught by the Sacred Scriptures and the Code of Canon Law, to respectfully intervene when anyone within the ecclesiastical hierarchy spreads messages that oppose the Truths of the faith or cause perplexities or doubts in the recipients. St. Paul, in his Letters, besides giving us the proof that it is possible to criticize even the Pope when he makes a mistake, recommends and teaches his disciple Timothy to “persevere in faith.” Here, I think this is the first task of the Catholic, who among other things is able to see how the Catholic Church, in recent times — perhaps out of a desire to move towards modernity — has somehow wanted to sweeten the consequences of the sin of abortion. John Paul II, in Evangelium Vitae defines abortion as: “The deliberate and direct killing, however it is carried out, of a human being in the initial phase of his existence, between conception and birth. (…) An enormous threat against the life, not only of individuals, but of the entire civilization.”

Have you seen in any movement within the Church since?

The Church is a divine institution. Its Founder, Our Lord Jesus Christ, knows how to direct hearts to Truth, because He is the Truth. The commitment of the laity, from this point of view, is fundamental, because it is Christ himself, in the Gospel of John, who commands them to exercise “right judgment.” The appeal that has been made to Tradition and its immutable Magisterium on life by the “Pledge of Fidelity” has in my opinion contributed profoundly to strengthening the positions of those within the Church who do not intend to give up a millimeter to the dominant worldview. This worldview is the fruit of a libertarian and radical ideology that has polluted the social life of the Western world and which, unfortunately, has also penetrated within the Church.

I am sure that this awareness and this testimony will be extended and will increasingly involve pastors in the commitment that has been entrusted to them by Our Lord: to preserve and pass on the faith, in its immutability and in its beauty.

Has the pro-life stance of the Catholic Church grown stronger?

At the March for Life participants include families with children — many children — associations, movements, parish communities, schools and individuals. All are united by the intention of defending innocent human life attacked by unjust and barbarous laws, which are contributing to the destruction of the present and the future of the entire European continent, which is thus losing its Christian identity.

It is an initiative promoted by lay people who want to defend life without compromise. Over the years, many priests have joined the Marchers and most of them participate wearing the dress that was once the only one for the Ministers of God: the cassock. And this is not a little sign: the form is the substance of things, as someone said, and in this case it seems to me that the definition is fully fitting.

What message do you hope to deliver through the upcoming March for Life?

The tens of thousands of people who will parade through the streets of Rome represent an Italy that exists and is alive. A country that is not willing to follow the dictates of the dominant worldview and which believes deeply in life and in the family. I always say, because I am convinced of it, that these “witnesses of the Truth” are much more numerous than one might think. They constitute a splendid and clear example of love for nascent life, which an inhuman logic wants to suppress, on the altar of free choice that turns into licence in the name of human rights and the right to individual self-determination.

Since the beginning of our “initiative,” which has been exciting and involving so many people who have contributed to its realization and its perpetuation over time, we have asked the different governments to support life and family. We have suggested that the funds used to support the application of law 194 on abortion, be used instead with the objective of helping families economically in the procreation of new generations.

What motivated you to become a leading pro-life voice within the Catholic Church?  Can you explain for our readers in a few paragraphs your “personal story”?

We are all of useless servants of God and I, as such, have felt within me the duty to commit myself against the general indifference about the homicide of so many innocent victims. We live in a society that challenges the Creator with a sin that cries for revenge in His sight. I literally feel horror over this. New generations have grown up in the last 40 years under a law that allows killing, and there are many who even advertise the social usefulness of such laws, as happens for exemple with euthanasia.

The unborn child does not serve any use and is treated as rubbish, for the good of the woman. The elderly or the sick person is no longer useful socially and, therefore, can be suppressed. Many mothers, in many cases with a certain ease, accompany their 13- or 14-year-old daughters into hospitals to have an abortion. I know cases of teenagers who had abortion repeatedly.

Secularized and anti-Christian society generates these aberrations and, unfortunately, the Church's silence on these issues comforts and justifies people in their behavior. I feel great sadness in looking at the eyes of today's young people, many of whom spend their lives wholly absorbed in the things of this world, this earthly life. They do not raise their eyes to Heaven. Perhaps this is the most important motivation that I have cultivated in these years: to witness that there is a true, higher, deeper and more authentic joy that the world of today denies.

Is there anything you else you want to say to the pro-life world?

Perhaps to insist more and more strongly on the need for public witness, as repeatedly requested during their pontificates by Pius XII, John Paul II and Benedict XVI. We cannot and must not leave the public square only to our adversaries, but must be present, also to comfort so many souls who feel isolated and consider themselves to alone in thinking in a way that is contrary to the “liquid society” in which we live.

We must also create a movement of opinion in Italy that you can hear and that is not ashamed of going into the public square. We cannot leave the public square to our opponents: Catholics must make their voices heard and reaffirm that there is no possible compromise on non-negotiable values.

We are leaving during these days (We have lived in these past few days) the case of little Alfie: we must be well aware that if we do not react now, infanticide will become the norm in our country. The demon is no longer satisfied with the blood of millions of victims in the womb of their mothers: now things have passed to the next step, the killing of infants. It is the new holocaust that the devil demands to be offered to him by modern man.