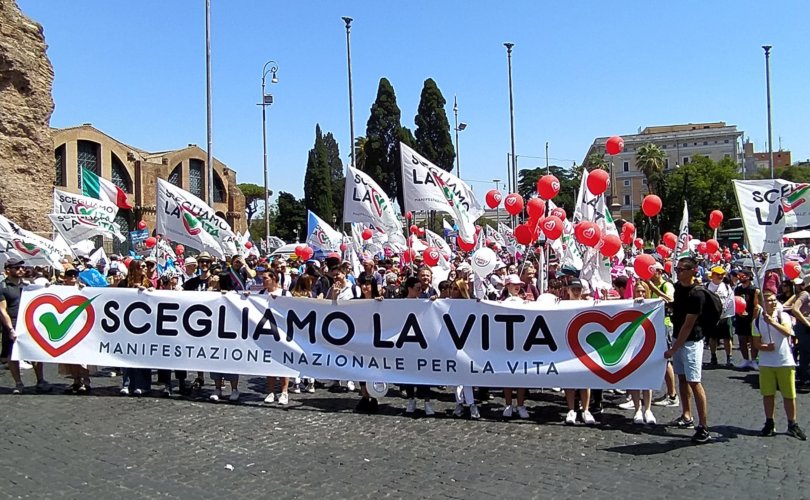 Italy's 2022 March for Life in RomeFacebook

ROME (LifeSiteNews) — Crowds witnessed to the unborn in the streets of Rome on Saturday in Italy’s 11th annual March for Life. The day marked the anniversary of the passing of the infamous Law 194 that authorized abortion in Italy on May 22, 1978. Thousands gathered for the march in Piazza della Repubblica, near St. Mary Major, one of the papal basilicas, and marched to St. John Lateran, the Pope’s cathedral.

“With this demonstration,” said Maria Rachele Ruiu, one of the speakers at the event, “we want to shake consciences from this dark shadow of existential pessimism, issuing a challenge to the country: Let’s choose life! Let’s choose life in Parliament, in the media, in the economy, in justice, in health care, in education, in social services, in the tax system, and in schools.”

Another outspoken pro-life advocate and doctor from northern Italy, Massimo Gandolfini, also addressed the crowds. In a statement about the March, he said, “We want to reaffirm that life is the first fundamental right of every human being, whose inviolable respect is the precondition for a free, just and peaceful society, as the Universal Declaration of Human Rights states.”

Gandolfini called the March “a beautiful day of hope and joy” that was intended to “celebrate the beauty of life, motherhood and fatherhood.”

In a statement in anticipation of Rome’s March for Life, Gandolfini addressed the need to change hearts in Italy on the issue of abortion by showing how beautiful life really can be. “It is necessary,” he said, “that many mothers, fathers, grandparents, children give public confirmation of their presence in defense of life, of every life, showing the beauty and dignity of every human life, in its thousand specificities.”

“As Sister Teresa of Calcutta said,” Gandolfini concluded, “‘As long as abortion is proclaimed as a right, the world will never have justice or peace.’  In Rome on May 21, the joy of many families will shine, with numerous children, with many colors, carrying in the heart the dream that that event becomes a fuse that lights the fire of life in everyone’s heart.”

On Sunday, May 22, the Pope greeted participants from Saturday’s march after the praying of the Regina Caeli in St. Peter’s Square.

“I thank you for your dedication in promoting life and defending conscientious objection, which there are often attempts to limit,” the Pope said.

Addressing the common argument that abortion is merely a matter of freedom of choice, the pontiff condemned the view as erroneous, reminding the faithful that “life is a gift from God,” and that it is “sacred and inviolable.”

“Sadly,” he declared, “in these last years, there has been a change in the common mentality, and today we are more and more led to think that life is a good at our complete disposal, that we can choose to manipulate, to give birth or take life as we please, as if it were the exclusive consequence of individual choice. Let us remember that life is a gift from God! It is always sacred and inviolable, and we cannot silence the voice of conscience.”

The Pope’s words Sunday stand in contrast to his recent praise of the prominent Italian abortionist Emma Bonino, who boasts that she and the abortion lobbyist group she founded in 1975, Information Centre on Sterilization and Abortion (CISA), committed 10,141 illegal abortions.

In an interview published May 3 in Italy’s Corriere Della Sera, the Pope said, “I have great respect for Emma Bonino: I don’t share her ideas, but she knows Africa better than anyone. In front of this woman, I say, chapeau.”

Saturday’s March for Life was preceded by Eucharistic Adoration the evening before, at which Cardinal Gerhard Muller, former head of the CDF, presided and preached. In his sermon, Muller compared abortion with the “cynical disregard” for human life of Stalin, Himmler, and Hitler, declaring, “One cannot propagate and justify the killing of nascent life in the womb without unmasking oneself as a diabolical misanthrope.”

Underscoring the spiritual nature of the struggle against abortion, Muller said, “We find ourselves in a ‘war against the saints’ (Rev. 13:7) … Anyone who demonstrates a pro-life position in Europe or America today is reviled, persecuted, discriminated against and excluded. U.S. Supreme Court justices who speak out against the right to abortion are threatened with death and the safety of their families is at risk. Mobs, fomented by the neo-Marxist media, are setting fire to Catholic churches, all in a country that prides itself on freedom of religion, expression and conscience. In Germany, as in all of Europe, where a battle of annihilation against life, marriage and family is underway, the government allows advertising for abortion and punishes those who warn mothers in front of abortion clinics of the most barbaric crime, namely killing their own child in the womb.”

All of these things, Mueller said, were part of the “life-and-death struggle” waged by Satan against God’s saints “and against Christ, the Lamb of God.”

He then called for a renewed witness to the sanctity of human life. “In this hour of struggle for life and against the death of the unborn, for the dignity of the gravely ill but also for those who risk suicide, when people want to convince them that death (disguised as mercy) is their right, we Christians are reminded, ‘Open your mouth in favor of the dumb, in defense of all the unfortunate’ (Prov 31:8),” he said.