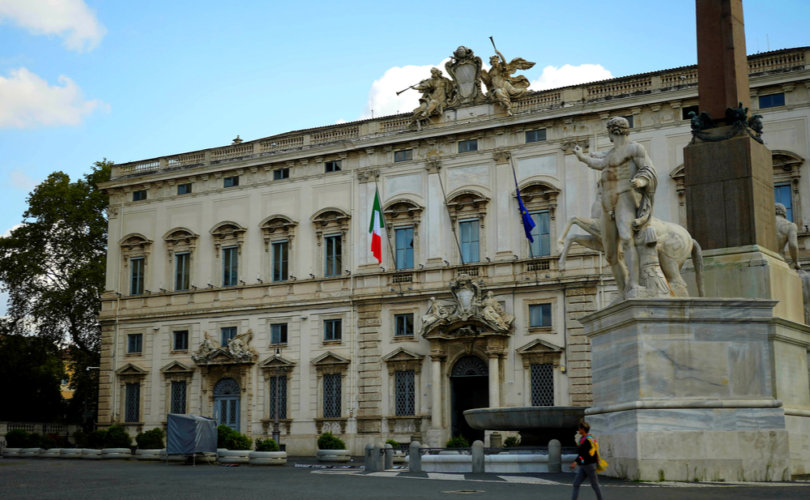 ROME, Italy (LifeSiteNews) — Italian children will no longer be automatically assigned their father’s last name at birth after a constitutional court in Rome ruled that it was unconstitutional to do so.

Italy’s Constitutional Court issued its judgment on Wednesday last week saying that it was “discriminatory and detrimental to the identity of the child” to “automatically assign the surname of his father” at birth.

“In accordance with the principle of equality, and in the interest of the child, both parents must be able to share in the choice of [their child’s] surname, which is a fundamental element of personal identity,” the court stated.

This means that Italian children will now be assigned both their parent’s surnames at birth unless the parents mutually agree to give their child only one surname.

“The rule becomes that the child will take the surname of both parents in the order agreed by them, unless they decide, by mutual agreement, to give only the surname of one of the two,” the court decreed.

For the first time, this also means that it will be possible for Italian children to only carry their mother’s name, should both parents agree.

The court also specified that this ruling will apply to children of both married and unmarried couples, as well as adopted children.

The ruling came after a request by two Italian parents to give their newborn baby the mother’s last name was denied, as the previous law only allowed for the child to carry either the father’s last name or a hyphenated name composed of both surnames.

Domenico Pittella, the family’s lawyer, told The Washington Post that the ruling was a “landmark judgment” for Italy that “acknowledged that it is in the best interest of the newborn child that the choices of his parents” dictate what the child’s name should be.

Pittella also argued that a child’s last name should not be “imposed by an outdated model of the patriarchal family.”

Cecilia D’Elia an Italian center-left Member of Parliament who calls herself a feminist, welcomed the court’s ruling, describing it as the abolition of “the last patriarchal aspect of family law.”

Elena Bonetti, the Italian minister of family and equal opportunities, also saluted the ruling which she described as “another fundamental step in achieving equal rights between the women and men in our country.”

In an interview with Italian newspaper Corriere Della Sera, she called automatically assigning children their father’s last name a form of “discrimination against women and children.”

In the U.S., though it is legal for children to be given their mother’s name instead of their father’s, the practice is still very uncommon.

According to Fatherly, in 2002, 97% of married parents gave their children only their father’s last name. In 2017, this number had dropped by only one percent at 96%.

In Italy, the legislature is now focusing on passing laws in order to implement the new ruling.