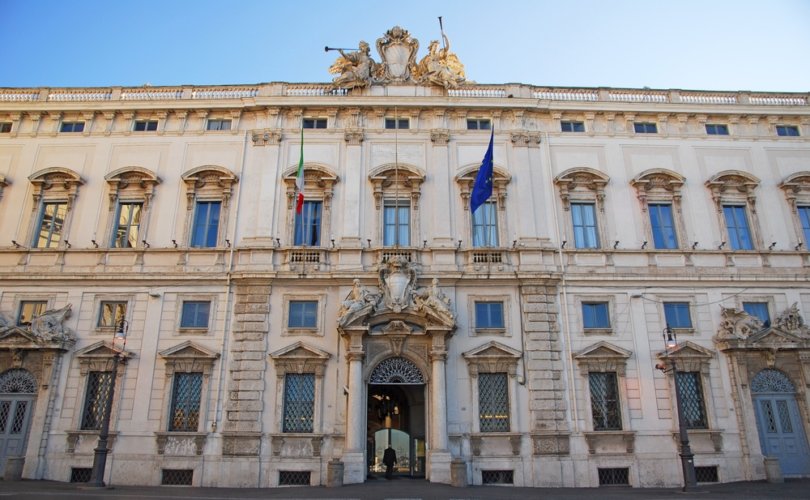 ROME (LifeSiteNews) — The Italian Constitutional Court this week upheld the criminality of euthanasia under Italian law by rejecting a move to legalize the practice.

The move was met with approval by the Italian Bishops’ Conference, while pro-euthanasia advocates have vowed they won’t stop fighting to decriminalize assisted suicide in the traditionally Catholic country.

Italy’s Constitutional Court made its decision on Tuesday, shooting down a petition that had asked the Court to consider a national referendum to override an existing law that punishes the “murder of a consenting person” with a maximum of 15 years behind bars, Vatican News reported.

The judges decided to uphold the prohibition despite the fact that the petition to scrap the law had gained some 1.2 million signatures from pro-euthanasia advocates.

Politico reported that in its ruling the Court determined the petition was “inadmissible,” and argued that rolling back punishments for euthanasia and assisted suicide would fail to ensure “the minimum constitutionally necessary protection of human life, in general, and with particular reference to the weak and vulnerable.”

An Italian court has blocked a possible referendum on the decriminalization of assisted suicide.https://t.co/twLIGjgnns

The Italian Bishops’ Conference (CEI) responded by praising the Court’s decision, pointing out that “more attention should be paid to people living in conditions of fragility and vulnerability who ask to be treated with dignity and accompanied with respect and love.”

The move to reject a national referendum comes after the Constitutional Court had “partially decriminalized assisted suicide in 2019 under certain conditions, requiring local health authorities and an ethics board to approve each request,” Crux reported.

Then in November 2021, Italy’s first medically assisted suicide spurred support for the legalization of euthanasia throughout the country.

Vatican News noted that debate over euthanasia “has come to the fore in Italy in recent years, with centre-left parties generally in favour of new legislation on end-of-life issues, and the centre-right opposed to it.”

According to Crux, a draft version of a law that would authorize euthanasia under Italy’s national health system and shield doctors from lawsuits for contributing to the deaths of terminally ill patients was brought up in the Lower House of Italy’s Parliament on February 9.

With lawmakers deeply divided on the issue, Vatican News reported that proponents of euthanasia decided to circumvent debate by opting to pursue a national referendum to resolve the matter through the courts.

On February 15, the petition calling for a national referendum on euthanasia was brought before Italy’s Constitutional Court, where it was quickly squashed.

The move comes after top Vatican officials last week issued strong statements against euthanasia, a practice that the Catholic Church has condemned as a form of murder and therefore “morally unacceptable.”

Cardinal Giovanni Battista Re, dean of the Vatican’s College of Cardinals and prefect emeritus of the Congregation for Bishops, last week blasted euthanasia as “an intrinsically unjust and cruel act.”

Pope Francis also spoke out against euthanasia in his February 9 general audience, calling the practice “inhuman” and arguing that no human being should be “discarded.”

The pope, who has earned sharp criticism from many Catholics and conservatives for seeming to condone homosexual “marriage,” lobbing attacks against the Traditional Latin Mass, and throwing support behind left-wing causes like racial ideology and climate change — including backing the radically pro-abortion Paris Climate Agreement — affirmed Church teaching last week by arguing that “We must accompany people towards death, but not provoke death or facilitate any form of suicide.”

“The right to care and treatment for all must always be prioritized, so that the weakest, particularly the elderly and the sick, are never discarded,” Pope Francis said, adding that “Life is a right, not death, which must be welcomed, not administered.”

The pope asserted that such a right to life is an “ethical principle” that applies to nonbelievers as well as Christians.

However not all bishops and Vatican officials have been supportive of bans on euthanasia.

Bishop Derio Olivero, who currently leads the Italian Bishops Conference’s Commission for Ecumenism and Dialogue and is known for his dissident stance on liturgy and doctrine, raised eyebrows last month when he suggested that the “sacredness” of life depends on the “quality of life.”

Asked if he opposed legislation authorizing assisted suicide, Olivero replied, “Not so.”

Meanwhile, pro-euthanasia advocates announced they will not back down from their attempts to make the practice legal in Italy.

The Luca Coscioni Association, the campaign group that organized the petition shot down by the Court this week, said in a statement, “The road to legalizing euthanasia does not stop here.”

“The court’s cancellation of the referendum makes the road longer and more torturous,” the group said, arguing that “[f]or many people, it means an extra burden of suffering. But the path we must take is clear.”

Conversely, Senator Paola Binetti, a member of the centrist Christian-democratic UdC party in Italy, has expressed “extreme satisfaction” with the Court’s decision to uphold the sanctity of all human life until natural death.