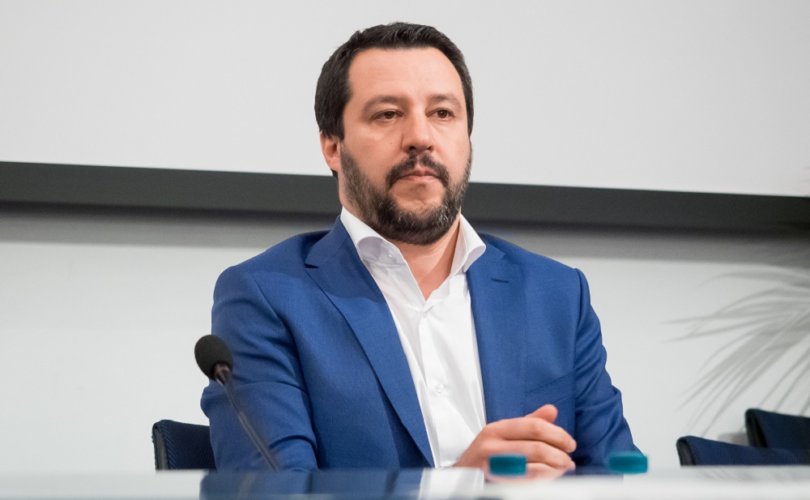 ROME, May 30, 2019 (LifeSiteNews.com) — Italy’s rising political star, Matteo Salvini, has been refused audiences with Pope Francis and has been denounced as not being Christian by the pope’s allies for opposing free immigration to Italy. Paradoxically, he is also blasted by the Francis regime for using Christian symbolism during his rallies. However, Cardinal Gerhard Müller, Pope Francis former doctrine chief, says the Church should engage with Salvini and those who reject free immigration and believes that the politician is returning to the “Christian roots” of the European Union in his use of religious symbols.

In an interview published yesterday following the landslide victory of Salvini’s party in E.U. parliamentary elections, Müller denounced the attacks against Salvini by Pope Francis’s partisans as “amateurish” and inappropriate.

“An ecclesiastical authority cannot speak about theological issues in an amateurish way,” said Müller to Italy’s Corriere della sera newspaper. “And above all he must not meddle in politics when there is a democratically legitimated parliament and government, as in Italy. It would be better to talk to Salvini, discuss, or correct it when necessary.”

Regarding Salvini’s use of religious imagery in his political activities, Müller told the newspaper that he “did not like it” and thought it “should be avoided.” However, he added, “it’s worse if the bishops confuse issues regarding faith with those regarding politics. You can criticize those who don’t accept principles, but don’t close the doors to them.”

Noting that “there are countries that want to de-Christianize Italy and Europe,” Müller added that “Salvini has gone back to the patrons of the European Union, to its Christian roots.”

“I prefer those who speak of the Christian tradition to those who remove it. It’s absurd for collaborators of the Pope like [Fr. Antonio] Spadaro to act like political judges.”

Müller is referring to Fr. Antonio Spadaro’s recent statements denouncing Salvini for holding up a rosary while entrusting the European Union elections to the Blessed Virgin Mary and the patron saints of Europe. Spadaro is editor-in-chief of the Jesuit newspaper La Civiltà Cattolica and a close ally of Pope Francis.

During a rally in Rome’s Piazza Duomo on May 18, just prior to the elections, Salvini, who is Italy’s deputy prime minister, declared, “We entrust ourselves to the six patrons of Europe: to Saint Benedict of Nursia, to Saint Bridget of Sweden, to Saint Catherine of Sienna, to Saint Cyril and Methodius, and to Saint Teresa Benedict of the Cross (Edith Stein).” He held up the rosary and invoked “the Immaculate Heart of Mary, which I am sure will bring us to victory.”

Spadaro responded on his Facebook page, “Rosaries and crucifixes are used as signs of political value, but now in reverse: if previously God was given what would have been good to remain in the hands of Caesar, now it is Caesar who holds and wields what belongs to God.”

In a follow-up to his Facebook post, Spadaro added, “‘Do not take the name of God in vain’ asks us not to use the name of God for our own purposes. Critical conscience and discernment should help us to understand that it is not a political rallies the place to make litanies (and in the name of values that have nothing to do with the Gospel of Jesus).”

Spadaro continued, “However, it is clear that nationalist and sovereign identity must be based also on religion in order to impose itself. He [Salvini] found this method of religious instrumentalization (in Italy as elsewhere in the world, be clear: we are not original in this!) as suitable and uses it. The Christian conscience, in my opinion, should shake with indignation and humiliation in seeing itself trafficked and flattered in such a manner.”

Adding to the criticism by Francis proxies was the cardinal secretary of state Pietro Parolin, who told reporters, “I believe partisan politics divides, but God belongs to everyone. Invoking God for oneself is always very dangerous.”

Cardinal Angelo Bagnasco, president of the European Bishops’ Conference, chimed in as well, telling La Stampa that particular groups cannot appropriate Christian values and that “acceptance and integration are essential values of the Gospel” and have “no color.”  Bishop Domenico Mogavero, who leads the judicial affairs panel of the Italian Bishops’ Conference, said, “Those who are with him [Salvini] cannot call themselves Christian because they have reneged on the commandment of love,” claiming that Salvini’s views are “inhuman, anti-historic views, diametrically opposed to the Gospel message.”

Müller blasted Mogavero’s comments in the Corriere della sera interview. “One can’t say that those who don’t share the reception of immigrants are not Christian. Clearly we must welcome immigrants, but not identify ourselves with a single policy.”

“People don’t understand, they are disoriented. When Salvini criticizes the Pope at the rally in Piazza Duomo, Milan, and there’s applause, where did we end up?” asked Müller, adding. “It’s strange that the Pope receives most lay people, and not Salvini. He talks with the Venezuelan regime, or with China that puts millions of Christians in re-education camps, destroys churches, persecutes Christians. But here in Italy we are not in China. You must speak to everyone in a spirit of brotherhood.”

As LifeSite has previously reported, Pope Francis has declined to meet with Salvini despite multiple attempts on the part of the latter to obtain an audience with the pontiff. However, Francis has met twice with the infamous Italian abortionist and radical leftist politician Emma Bonino, who boasts she has personally killed unborn children in illegal abortion facilities and continues to defend the practice of abortion, and has praised her publicly as a “forgotten great” for her work with refugees. Francis also gave an audience to the pro-abortion rock star “Bono” and has welcomed into the Vatican many advocates of abortion and population control such as Paul Ehrlich, John Bongaarts, and Jeffrey Sachs.

While denying he was attacking the pope, Müller noted that “years ago the Pope said about the future U.S. president, Donald Trump, that it was not Christian to build walls to repel immigrants,” Müller noted. “I think it was a mistake, like that of some German bishops, who deal more with politics than with faith.”

“Perhaps it also depends on the fact that the role of the Church has changed. But the Church must reconcile, not divide. But today, anyone who criticizes it is branded as an enemy of the Pope, and lay people who say different things are defined as non-Christians,” said Müller.