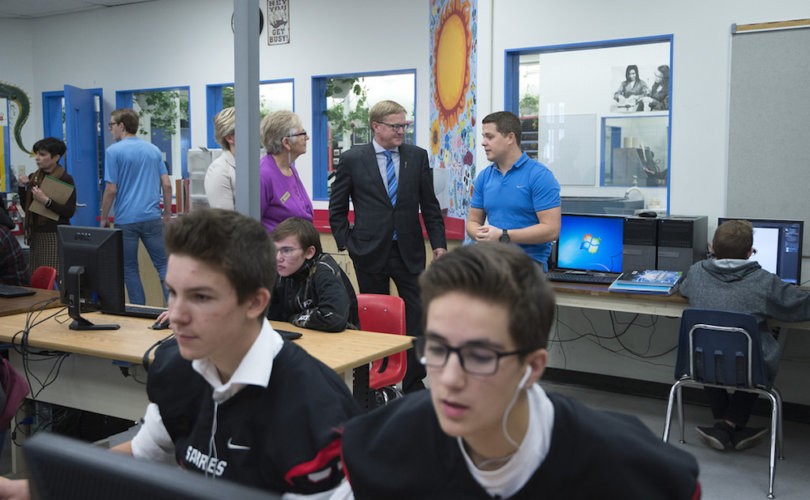 Legislation passed by the previous Progressive Conservative government requires all schools to set up GSA clubs to support homosexual or transgender students if a student requests it. But the law says nothing about informing parents.

The issue of informing parents was raised by groups such as Parents Choice in Education since the passage of Bill 10 in 2015 made GSAs mandatory. However, the story became front-page news last week. New Progressive Conservative Party leader Jason Kenney told the Calgary Herald editorial board that he supported parents’ right to know about their children’s GSA membership.

Eggen called Kenney’s position “extremist” and sent a letter to all school boards that said, in part, “I am telling you today that such notification should not occur. We have heard loud and clear from students that GSAs … save lives.”

However, Eggen told reporters that no law forbids schools from informing parents. He added, however, that he was “looking into” drafting such a law.

Eggen’s statement echoed and expanded upon new guidelines recently issued by his ministry that educators cannot inform parents of their children’s sexual behavior at school without a child’s explicit permission.

Only last week the trustees of Alberta’s tax-funded Catholic school boards issued a defiant response declaring they would follow Catholic teaching and not the NDP’s guidelines in handling transgender and homosexual issues. They would allow anti-bullying clubs to be set up, for example, but only ones that were consistent with such teaching.

Alberta has a highly pluralistic school system that provides full tax funding for both Catholic and public schools (some of which are explicitly Protestant) and partial funding for private sectarian schools. Encouraged by LGBT activists and the Alberta Teachers Association, the NDP government has appeared to be picking a fight with Christian school supporters. These are not likely to be supporters of the NDP at the best of time.

Eggen has recently ordered two private Christian schools to “comply with the School Act” and set up GSAs. The Justice Centre for Constitutional Freedoms, which is representing the schools legally, has responded that the schools are compliant without GSAs because no students have ever requested the clubs.

The JCCF has also warned Eggen he was close to violating the schools’ and the parents’ constitutional rights. In a letter to the minister, it cited “the 2015 Supreme Court of Canada decision in Loyola High School v. Quebec,” where the Court ruled that the government cannot “undermine the character of lawful religious institutions and disrupt the vitality of religious communities.”

The case involved a private Catholic school that the Quebec government insisted must teach a religion course giving equal credence to all faiths. “The Court was unanimous in finding that the Education Minister in that case had unlawfully limited freedom of religion,” the JCCF told Eggen.

John Carpay, the founder and head of the JCCF, told LifeSiteNews, “The public has been sold a big lie about GSAs. They are not just a support group. Anyone who spends more than a few minutes on a GSA website can see they are preaching a worldview hostile to what most Christian faiths believe.”

Carpay said Eggen’s directive to schools to keep students’ sexuality secret from their parents may be within his legal powers as the minister of education.

GSAs, on the other hand, violate parental rights under the Charter of Rights and Freedoms and international human rights conventions. The ideology behind GSAs is “incompatible” with beliefs taught not only by Christian schools but by those of other religions.

Ostensibly, GSAs try to eradicate homophobia, said Carpay. But what homophobia means to them is “any opposition to same-sex marriage.”

If there is to be a Charter challenge, said Carpay, it will come when a faith-based school refuses a student’s request to set up a GSA club and the government penalizes it or forces it to comply.

The New Democratic government is indeed challenging the province’s Christian schools and it is doing so because of its own quasi-religious ideology, the Rev. Shafer Parker of Hawkwood Baptist Church near Calgary told LifeSiteNews. “It’s a fight to the death. Either tyranny or freedom will win.”

“The New Democratic government believes in a religion that makes the State its god,” Parker said. “It will tolerate no other god before it. So it must remove children from parental influence.”

In the specifics of the fight over Gay Straight Alliances, said Parker, “Eggen is portraying parents as vicious monsters for caring about their children enough to be fully informed about their sexual confusion.”

Parker noted that Eggen enjoyed the uncritical support of mainstream media. They have accepted the ideological belief that “all homosexuality is ingrained, and all transgenderism is ingrained. There is no scientific basis for either belief.” Parker said some children are genuinely confused about their sexuality and parents offer better support than school staff in those instances.

Sharing Parker’s view is Jojo Ruba of the Faith Beyond Belief Christian evangelizing organization. “I’m livid that the NDP government is actually demonizing parents for wanting to know about their chldren’s sexuality,” Ruba told LifeSiteNews.

“I trust parents with the care of their own children before I trust the government or the teachers’ association,” Ruba added. “Those parents will be closer to their children than anyone else until they day they die, and long, long after the children have moved on to new teachers or left school.”

Ruba said he was afraid that the way the GSA issue was being used by the NDP meant that “Christians will be the scapegoat in the next election, and their beliefs portrayed wrongly as hateful of gays.”