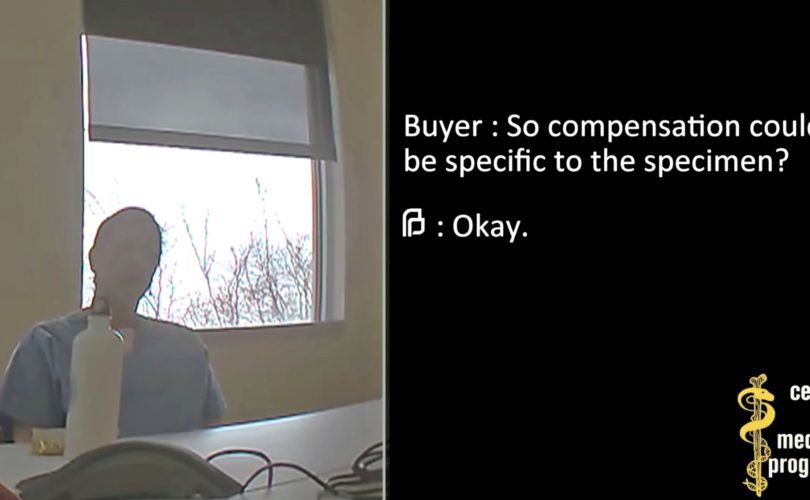 July 30, 2015 (LifeSiteNews) – Workers in a lab are seen sorting through body parts on a dish: a heart, stomach, kidney, and legs.

And then a medical assistant suddenly announces: “It's another boy!”

This is just a little of the macabre and heart-wrenching footage in the newest undercover video showing alleged harvesting and sale of body parts from aborted babies by Planned Parenthood, released Thursday morning.

“For anyone with a conscience, the video's entire fetal organ scene is wrenching — to the gut as well as the heart. It hearkens us back to the days of Joseph Mengele or Kermit Gosnell, who both coldly killed and dissected children without remorse,” said Operation Rescue President Troy Newman, in a press release.

The video takes the viewer into Planned Parenthood of the Rocky Mountains, where Vice President and Medical Director Dr. Savita Ginde discusses with actors posing as representatives from a human biologics company a potential partnership to harvest fetal organs.

When one of the actors posing as a buyer asks the doctor if “compensation could be specific to the specimen?” Ginde agrees. As the camera travels to the abortion clinic’s pathological laboratory to reveal the aftermath of a real abortion of a baby boy, Ginde tells the buyer that the abortion clinic would rather receive payment per body part harvested, rather than a standard flat fee for the entire case.

“I think a per-item thing works a little better, just because we can see how much we can get out of it,” she is heard saying on the video.

Planned Parenthood hit national headlines last month after undercover videos released by the pro-life group Center for Medical Progress (CMP) showed top officials from the nation’s largest abortion provider discussing the sale of body parts harvested from babies aborted at their facilities. Those behind the undercover videos say that selling the body parts for profit is a violation of federal law.

Project Lead David Daleiden is using the fourth video to call for an immediate ending to Planned Parenthood’s funding.

“Planned Parenthood’s recent call for the NIH to convene an expert panel to ‘study’ fetal experimentation is absurd after suggestions from Planned Parenthood’s Dr. Ginde that ‘research’ can be used as a catch-all to cover-up baby parts sales. The biggest problem is bad actors like Planned Parenthood who hold themselves above the law in order to harvest and make money off of aborted fetal brains, hearts, and livers,” he said.