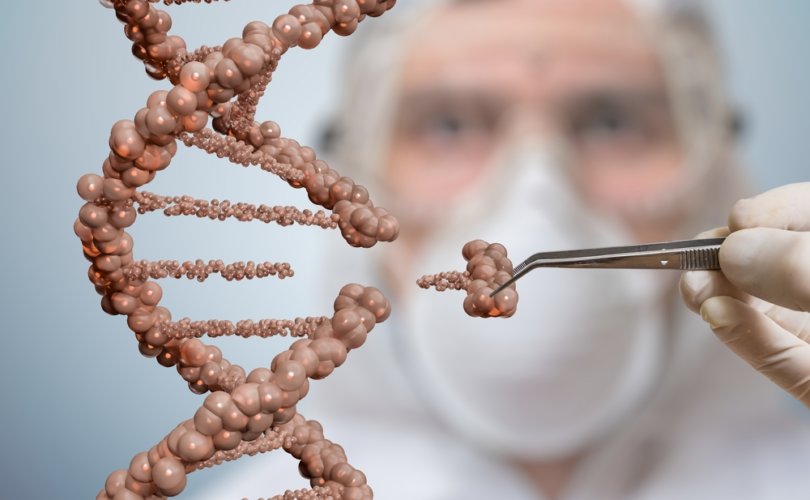 LONDON, England, June 26, 2020 (LifeSiteNews) – A Catholic ethicist has characterized as “child abuse” the embryonic research of a team of UK scientists after they destroyed over a dozen tiny humans following extensive manipulation of their DNA using a gene-editing technique known as CRISPR. The scientists published their findings in a paper.

“Child abuse is an offense reportable by health care providers. Yet scientific journals publish such research as if it represents a good,” Catholic ethicist Dr. Marie Hilliard told LifeSiteNews in an interview.

According to OneZero, which summarized the findings described by the scientists in a June 5, 2020 paper that has not yet been peer-reviewed, several of the little babies had “abnormalities across a particular chromosome.”

The team of scientists “started with 25 human embryos and used CRISPR to snip out a gene known as POU5F1 in 18 of them. The other seven embryos acted as controls.”

“The researchers then used sophisticated computational methods to analyze all of the embryos,” OneZero reported. “What they found was that of the edited embryos, 10 looked normal but eight had abnormalities across a particular chromosome. Of those, four contained inadvertent deletions or additions of DNA directly adjacent to the edited gene.”

While CRISPR has been known for the possibility for “off-target” effects, “which can happen if the CRISPR machinery doesn’t edit the intended gene and mistakenly edits someplace else in the genome,” the London team of scientists, led by Kathy K. Niakan, “sounds the alarm for so-called ‘on-target’ edits, which result from edits to the right place in the genome but have unintended consequences.”

In other words, not only the particular gene is edited that was intended to be edited in the first place, but other parts of the DNA around that particular gene are also affected, which can cause problems.

Hilliard told LifeSiteNews that the methods described by the team of scientists in their paper, “while intending to demonstrate if on-target gene editing of human embryos is possible, constitute the most egregious abuse of the most helpless of human beings, who are then destroyed.”

Even if the embryos were to develop into adults, Hilliard pointed out, reproductive cells could have been altered, which could then impact the human race if these human beings reproduced just like human beings whose DNA had not been altered. This is why the scientists have opted to destroy the embryos.

According to Dr. Hilliard, the team of scientists, in their paper, represented “the ultimate cannibalization of human beings, conceived through in-vitro fertility treatments (IVF), purportedly because they were desired by loving parents, then abandoned by them to science. In reality, these offspring are treated by their unknowing parents as commodities, after their brothers or sisters, who were allowed to live, were deemed to be more desirable.”

Hilliard explained that parents “erroneously are told that a human being does not exist until the embryo is implanted in the mother’s womb. Thus, parents often mistakenly intend to do a good by donating their conceived human embryos to science.”

“Yet a grave evil is imposed upon their sons and daughters, who are experimented upon and then destroyed,” she continued. “Ethical principles of research not only demand informed consent of the subject, but also that the research will benefit the subject, or at least have a neutral effect. In this case, the embryos were mutilated before they were destroyed.”

Hilliard emphasized that gene-editing as such “is not intrinsically wrong, meaning by its very nature always an evil. In fact, it may constitute a ‘good,’ depending on how it is done and for what purpose.”

However, gene-editing should first be tested on certain animals like mice. “Ethically, the prerequisite animal research must demonstrate effectiveness and safety before applied to human beings,” Hilliard explained. “Studies on animals indicate there is great potential for targeted base-editing, and human success with sickle cell anemia and thalassemia is being demonstrated.”

The ethicist noted the irony of scientists destroying what they know to be human beings while abortion supporters often argue that the embryo in the mother’s womb is not (yet) a human being.

“Furthermore, destroying them before implantation in a mother, because to let them develop and reproduce could impact the human gene pool, clearly demonstrates that these embryos are human beings,” she added. “How scientists can deny, or at least ignore this truth is unfathomable.”