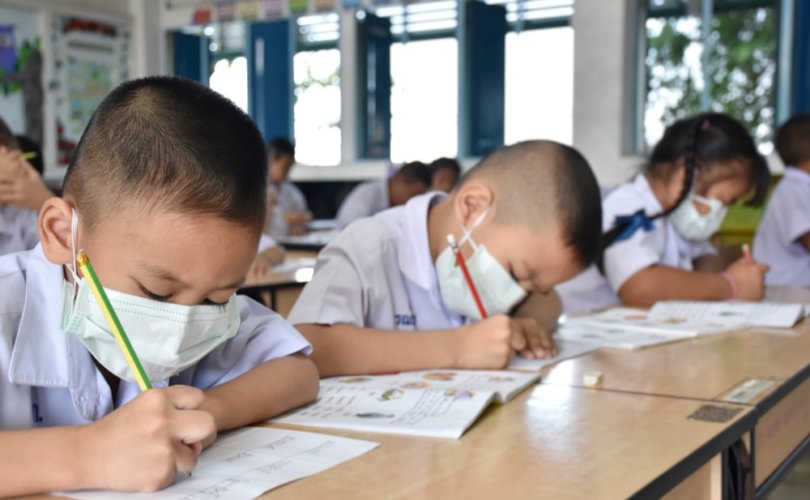 EL CAJON, California (LifeSiteNews) — California regulators shut down a Christian preschool for allegedly violating a mask mandate for toddlers and banned the school’s director from working with children again, after months of what school officials described as “intimidation” by the state.

The California Department of Social Services shuttered Foothills Christian Church Preschool in El Cajon on December 10, LifeNews reported. The closure came after the San Diego-area school reportedly did not encourage students two years old and up to wear masks.

The state has also claimed that the preschool did not ensure that employees wore face masks and prevented inspections to allow employees and students time to put on masks, according to CBS 8. All individuals older than two are required to wear face masks in California in all indoor settings, including public and private schools and child care programs.

The Department of Social Services additionally banned preschool director Tiffany McHugh from working with children for the rest of her life.

Foothills Christian Church’s preschool had been in operation for six years and had more than 100 students. But in the last several months, the church and the school became “a target” for state regulators, according to senior pastor David Hoffman.

Hoffman said that California officials have visited the preschool at least 11 times in recent months, often for several hours at a time, after a parent complained.

“Our church used to have a great preschool here,” Hoffman said. The school’s waiting list was “so large that we were in the process of expanding our preschool.”

“Several months ago, this church, this preschool became a target by the Department of Social Services. Basically, what it boils down to is they were not happy with how many of our children did not have masks on,” he added. “They came here, they visited. They found a few other violations, which our director rectified in 24 hours. But the state kept coming back, 11 times.”

During that time, the officials were “looking through our files,” according to the pastor. “They [were] looking at these files over and over and over again to try to find any violation they could.”

When the state finally closed the preschool after an evaluation in December, families weren’t given any prior notice, Hoffman continued. “They couldn’t really find anything wrong except that not enough kids had masks on.”

Various studies, including large randomized controlled trials, have shown that mask mandates do not stop the spread of COVID-19. Research has also found that masks actively harm children, causing them to breathe dangerous levels of carbon dioxide and potentially devastating their cognitive development.

“The potential educational harms of mandatory-masking policies are much more firmly established, at least at this point, than their possible benefits in stopping the spread of COVID-19 in schools,” Dr. Vinay Prasad, an epidemiology professor at University of California San Francisco, has warned. “Early childhood is a crucial period when humans develop cultural, language, and social skills, including the ability to detect emotion on other people’s faces.”

Children and teenagers face virtually no risk of death or serious illness from COVID-19. Between 0-0.02 percent of COVID cases in the United States under age 18 have resulted in death, according to the American Pediatric Association.

The revelations about Foothills Christian Church Preschool come amid an ongoing scandal in Salinas, California, where two public school teachers admitted in leaked audio that they “stalked” children to get them to join LGBT clubs.

A mother of one student last month accused the teachers of persuading her 12-year-old daughter that she was “transgender.” The girl eventually became suicidal, which the school discovered but never told her parents, the mother said.

California mandates pro-LGBT, pro-abortion “sex education” in public schools and requires students to attend lessons on “gender identity” and same-sex “marriage.” The state’s public schools, which rank among the worst in the nation, must allow students to leave school to obtain an abortion, which cannot be disclosed to parents.

Many of California’s largest school districts have also mandated COVID-19 vaccination for children over the age of 12 to return to in-person class.

Amid the failings of California public education, families at Foothills Christian Church Preschool “don’t have anywhere to take their kids,” Hoffman said.

The church has appealed the closure. A hearing is set for Friday.

Parents, Christian pastors, and Republican officials gathered at the school last week to protest the state’s decision. At the demonstration, California Sen. Brian Jones slammed the regulators’ treatment of the preschool, calling it the “single most upsetting situation I have ever had a government agency put down on my constituents.”

McHugh’s suspension “is unconstitutional” and “violates every founding principle of this country and even this state,” Jones said.