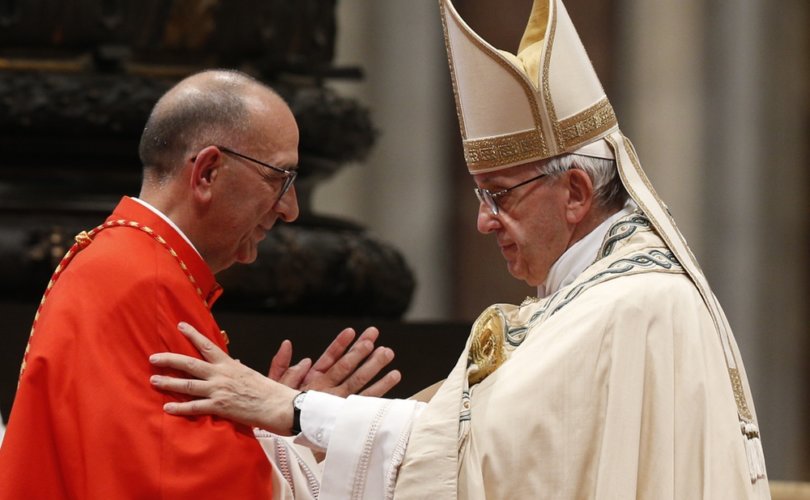 ROME, June 30, 2017 (LifeSiteNews) — One of Pope Francis’ newly appointed cardinals is already calling out fellow cardinals who are questioning the new direction in which the Pope is trying to move the Church.

Archbishop Juan José Omella of Barcelona, Spain, told reporters this week, prior to becoming a cardinal, that the four cardinals shouldn't be waging what he called a “public fight” with the pope. The four have asked Pope Francis to clarify whether his Exhortation Amoris Laetitia conforms to perennial Catholic teaching on marriage, the Eucharist, and conscience.

Last year Cardinals Carlo Caffarra, Walter Brandmüller, Raymond Burke, and Joachim Meisner went public with their questions, known as dubia, after the Pope failed to give them a response. They had hoped that the Pope answering their five yes-or-no questions would dispel what they called the “uncertainty, confusion, and disorientation among many of the faithful” stemming from the controversial exhortation.

Earlier this month the four released a letter to the Pope in which they unsuccessfully asked him for a private audience to discuss “confusion and disorientation” within the Church as a result of the Exhortation.

The exhortation has been used by various bishops and bishops’ groups, including those in Argentina, Malta, Germany, and Belgium, to issue pastoral guidelines that allow Communion to be given to civilly-divorced-and-remarried Catholics living in adultery. Bishops in Canada and Poland have issued statements based on their reading of the same document that forbids such couples to receive Communion.

But Omella told Crux in the June 27 interview that, in his view, the Exhortation develops Catholic moral teaching and practice, that it is rooted in the Catechism, and that it is clearly in continuity with John Paul II’s Familiaris Consortio.

He praised Amoris for moving the Church “forward” by teaching that everyone’s situation is different and cannot be solved with “black and white” morality.

“We have to move forward in the accompaniment of people in their process in which they meet Jesus Christ and the doctrines of the Church and the Gospel…Because it’s not all black and white,” he said.