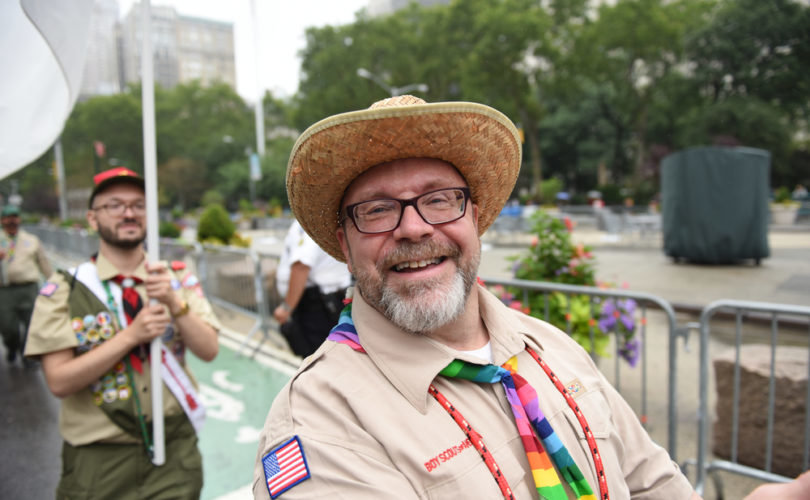 IRVING, Texas, July 30, 2015 (LifeSiteNews) – The Boy Scouts of America took the final step Monday in lifting its ban on Scout leaders who openly profess homosexuality – but many gay activists decried the change for not going far enough.

The BSA executive committee passed a resolution to lift the ban two weeks ago.  On Monday, July 27, the National Executive Board ratified the decision, with 79% of the board's 80 members agreeing.

The shift in policy incurred lukewarm approval from homosexual activists, with many expressing disapproval of the policy’s religious exemption clause. Gary Signorile, the editor-at-large for the Huffington Post's “Gay Voices” site, blasted the BSA's provision allowing individual chapters to cleave to their consciences on the matter of same-sex-attracted Scout leaders.

“By allowing the religious-affiliated troops to still ban gay adults,” Signorile wrote, “the BSA is making a religious exemption seem like a reasonable compromise when in fact it is allowing the very people who would discriminate to keep discriminating.”

Signorile echoed the sentiments of liberal groups who hope to curtail the freedom of religious expression for Catholics, Mormons, and others in the United States who define marriage as between one man and one woman.

The American Civil Liberties Union, for example, declared recently that it would no longer defend Religious Freedom Restoration Acts (RFRAs) federally or among the states.  ACLU deputy legal director Louise Melling wrote in June, “The RFRA wasn’t meant to force employees to pay a price for their employer’s faith, or to allow businesses to refuse to serve gay and transgender people, or to sanction government-funded discrimination.”

Chad Griffin, president of the Human Rights Campaign, complained that “including an exemption for troops sponsored by religious organizations undermines and diminishes the historic nature of today's decision.  Discrimination should have no place in the Boy Scouts, period.”

Scouts for Equality, a homosexual activist group formed in 2012, called the decision the “beginning of a new chapter,” an example of “going forward, not back.”  A press release from the group piled on against people who oppose homosexuality on religious grounds: “In effect, Boy Scout units sponsored by churches will have the right to continue discriminating against gay adults on a troop-by-troop basis.”

The BSA voted in 2013 to end its ban on youth members acting on their same-sex attractions, shortly after a committee within the organization unanimously found that the ban was “absolutely the best policy.”  In 2014, BSA president Robert Gates, who served as secretary of defense under President Obama until 2011, declared that he would have allowed openly homosexual Scout leaders as well at that time.

These decisions have come in the wake of intense corporate and political pressure, including from Disney and President Barack Obama.

The National Catholic Committee on Scouting offered a guarded response to the July 27 resolution, noting, “it appears that the resolution respects the needs of Catholic-chartered organizations in the right to choose leaders whose character and conduct are consistent with those of Catholic teaching.”

However, “we express strong concern about the practical implications of this resolution, especially for our young people in Scouting, and whether the term 'sexual orientation' will be correctly understood and applied only in reference to sexual inclination and not to sexual conduct or behavior.”

The Church of Jesus Christ of Latter-Day Saints (Mormons), which sponsored 17 percent of Scouting youths as of 2013, has announced that it may cut ties with the BSA. “The Church has always welcomed all boys to its Scouting units regardless of sexual orientation,” an official statement reads. “However, the admission of openly gay leaders is inconsistent with the doctrines of the Church and what have traditionally been the values of the Boy Scouts of America.”

In 2012, Portland, Oregon attorney Kelly Clark publicly released thousands of pages of BSA documents detailing over a thousand molestation cases within the organization.  The sexual assault records cover the time period from 1965 to 1985 and were used in a lawsuit Clark successfully filed against the BSA.

Sex scandals plagued the organization in the 1990s as well, leading to BSA policies mandating that two adults always be present with Scouts and forbidding leaders to touch Scouts.

In a statement, BSA president Gates justified the decision on monetary grounds.  “Any effort” to maintain the ban, which the U.S. Supreme Court upheld in 2000, “was inevitably going to result in simultaneous legal battles in multiple jurisdictions and at staggering cost.”

“For far too long this issue has divided and distracted us,” Gates concluded. “Now it's time to unite behind our shared belief in the extraordinary power of Scouting to be a force for good in a community and in the lives of its youth members.”