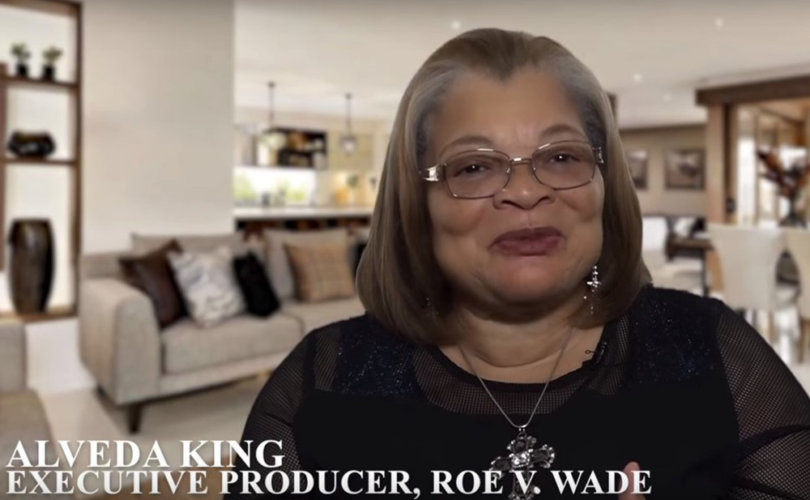 Alveda King, Martin Luther King Jr.’s niece, is the executive director of a feature film in the making to tell the true, untold story of the Supreme Court case that legalized abortion

July 12, 2018 (LifeSiteNews) – Producers of a movie about a landmark Supreme Court of the United States abortion rights case are threatening legal action against a media outlet for alleged copyright infringement.

Think of it as Roe V. Wade versus The Daily Beast.

“We’re going to sue The Daily Beast for a violation of our copyright,” said Nick Loeb in an interview with LifeSiteNews Thursday. “We’re discussing with our lawyers now.”

A New York-based online news outlet, The Daily Beast boasts a daily readership of more than one million. It included details from the script of Roe V. Wade in an article published last Saturday. The headline of that article charged the movie with pushing “conspiracy theories and lies”.

According to Loeb, The Daily Beast managed to get a leaked copy of the script.

“What we were told is one of the crew members illegally leaked it because they all have non-disclosure agreements and confidentiality agreements,” he said.

Since The Daily Beast’s publication of that behind-the-scenes article, tensions have only escalated between the movie’s crew and the media outlet’s reporters.

At about 6:30 a.m. Thursday, a incident broke out while the crew of Roe V. Wade was shooting a scene.

“We were shooting at the Lincoln Memorial this morning with Corbin Bernsen and Wade Williams,” said Loeb.

“Some reporter came running up onto the set and was standing right next to our actors while they were trying to shoot. He barged onto our set while they were doing their dialogue and started furiously copying down his dialogue, which is our copyrighted material,” said Loeb.

According to him, a 20-something intern took The Daily Beast reporter’s notes away from him with the admonishment that this is copyrighted material. The producer said the reporter then started yelling on the locked set.

“The guy went ballistic, started screaming – and the intern got nervous, started walking away. The Daily Beast reporter wouldn’t stop verbally abusing him and getting into his personal space. He had to walk away,” said Loeb. “Eventually, the security of the park had to come and tell the guy he had to go. It was literally insane.”

Loeb later tweeted a 20-second video of that confrontation. It includes foul language.

The Daily Beast reporter, though, tells a different story in an article published later that day.

“A crew member of a controversial anti-abortion movie stole my notes while I reported from a shooting location in Washington, D.C.,” wrote Daily Beast reporter Will Sommer.

He maintains he was in a public space with a group of tourists when a Roe V. Wade crew member grabbed his notepad out of his hand by force.

“The man hid my notepad in his pocket and began quickly walking away down the steps of the monument,” wrote Sommer. “The crew member refused to give the notebook back as he walked away, and insisted that I stop following him.

“As he walked down the monument’s steps, the crew member ripped my notes out of the notepad, handed the notepad back, and crumpled up the notes. Then he continued walking away with the pages, stopping briefly at the production’s snack table,” wrote Sommer.

The Daily Beast reporter claims he was the one who called the park’s police and the notes were returned after the crew member was searched.

Even though it is still filming and the script was until last week a closely-guarded secret, the pro-life Roe V. Wade movie has already generated a lot of backlash from pro-abortion activists. Crew members and actors have quit and locations have been canceled due to controversy over the film’s pro-life message.

Earlier this year, a woman wearing a headset walked up to Loeb during a day of shooting and asked him if he was the director. When he replied that he was, she threw down her headset and swore at him, according to The Hollywood Reporter.

Louisiana State University wouldn’t let the crew film there. Tulane University let them shoot for a day and then denied them a second day after the student newspaper reported on the movie. A synagogue rented for catering and as a hangout for extras locked them out.

Despite all of those challenges, Loeb said Thursday the movie is on schedule. The crew was near Washington, D.C. Thursday.

“Everything is on track,” he said.

The movie producer would not divulge exactly how much money has been raised for the project but said there have been several private investors stepping up as the movie gets more media coverage, adding to the funds raised during the crowdfunding campaign.

“We’ve also got several distribution deals from studios coming to us … for between 1,000 to 1,500 screens,” he said. “It’s been phenomenal.”

The producers of Roe V. Wade have claimed on their Indiegogo crowdfunding page that this movie will tell the real story of how the media lied and the courts were manipulated to pass a law that has since killed 60 million unborn Americans.

“Many documentaries have been made, but no one has had the courage to make an actual feature film, a theatrical movie about the true story,” the movie’s Indiegogo page states. “Hollywood only wants you to hear their version of the story. In fact, there are three movies currently in development that take a pro-abortion stance. But you shouldn’t be surprised. Hollywood has always had an agenda to influence Americans to accept abortion, even if they have to re-write history to do it.”

Liberals just guaranteed that abortion will be legal in Delaware … even if Roe v. Wade is overturned