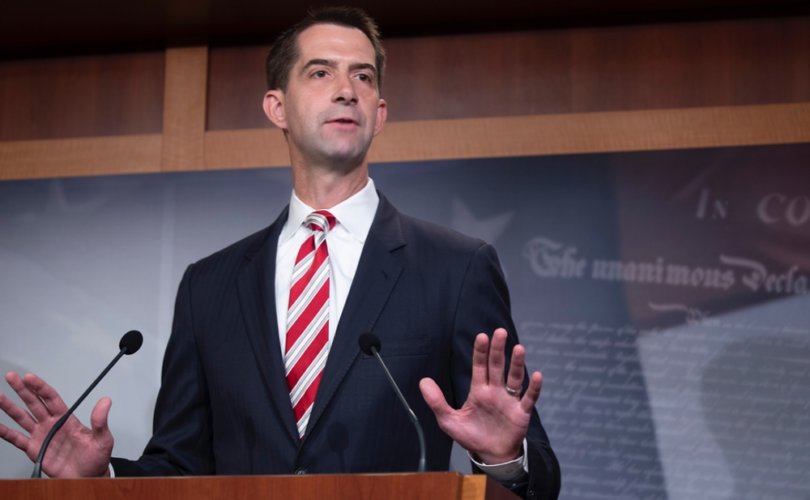 UNITED STATES, September 10, 2020 (LifeSiteNews) — Republican Sen. Tom Cotton of Arkansas called for the dismantling of U.S. abortion law shortly after being named by President Trump among a list with 20 additional names of potential Supreme Court nominees.

“It's time for Roe v. Wade to go,” Cotton posted to Twitter yesterday, referring to the 1973 Supreme Court decision which imposed abortion on demand across the country.

“I’m honored that President Trump asked me to consider serving on the Supreme Court and I’m grateful for his confidence. I will always heed the call of service to our nation,” Cotton said in an official statement.

“The Supreme Court could use some more justices who understand the difference between applying the law and making the law, which the Court does when it invents a right to an abortion, infringes on religious freedom, and erodes the Second Amendment.”

Unlike Cotton, Hawley subsequently stated that he has “no interest in the high court” and is focused on “confirming constitutional conservatives.”

I appreciate the President’s confidence in listing me as a potential Supreme Court nominee. But as I told the President, Missourians elected me to fight for them in the Senate, and I have no interest in the high court. I look forward to confirming constitutional conservatives

Hawley recently said he will “vote only for those Supreme Court nominees who have explicitly acknowledged that Roe v. Wade was wrongly decided.”

Trump also added to the list Allison Jones Rushing, a social conservative favorite who previously interned for Alliance Defending Freedom and now sits on the U.S. Court of Appeals for the 4th Circuit, and Stuart Kyle Duncan of U.S. Fifth Circuit Court of Appeals. Duncan was the lead attorney who successfully argued on behalf of the owners of Hobby Lobby before the United States Supreme Court against Obamacare’s contraception mandate, thereby protecting the conscience rights of business owners.