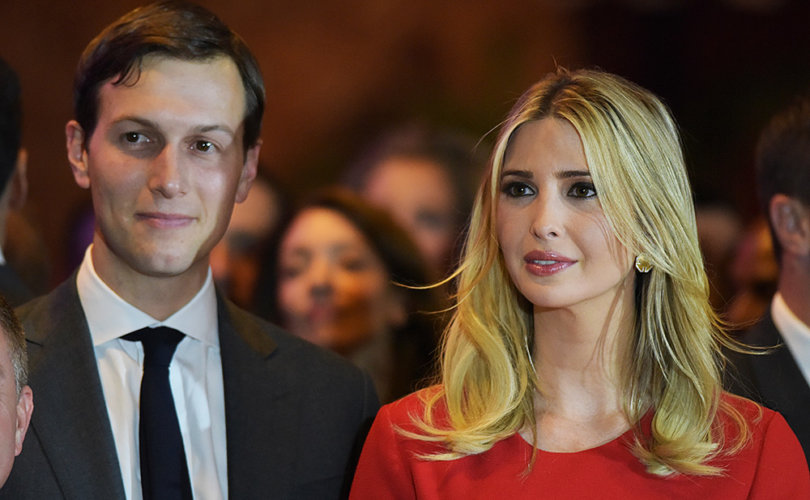 With the Kushners’ White House clout reportedly growing, many conservatives are wary of their liberalism. In particularly, pro-family advocates cannot understand how a couple who publicly practice a religion as biblically tradition-bound as orthodox Judaism can at the same time champion the revolutionary notion of creating “rights” — including “marriage” — based on homosexuality.

Orthodox Jewish teaching, rooted in the Torah, the divine revelation to Moses in the first five books of the Old Testament, regards homosexual acts as an “abomination” (“detestable”) before a holy God. Homosexual unions, including the genderless redefinition of “marriage,” are believed to be sufficiently evil to warrant God’s destruction of whole societies that allow them.

“To countenance homosexual ‘marriage’ is totally beyond the pale,” Rabbi Yehuda Levin told LifeSiteNews. Levin is a pro-life and pro-family advocate and former representative of both the Jewish Union of Orthodox Rabbis and the Rabbinical Alliance of America.

“You can’t be serious as an Orthodox Jew and support the ‘gay’ agenda,” said Brian Camenker, a pro-family advocate who attends an Orthodox synagogue in Newton, Massachusetts. Camenker, the president of the national pro-family group Mass Resistance, said the Kushners “are not like any orthodox I’ve ever seen.”

Another Rabbi and veteran teacher in a northeastern Jewish high school, who asked to remain anonymous, said that apparently to Kushner, “social acceptability is more important than truth.”

Most of Kushner’s fellow Orthodox Jewish critics described him to LifeSiteNews as a “modern Orthodox,” noting that (especially younger) moderns tend to be less observant of Jewish law requirements than other orthodox. In contrast, the Reform and Conservative branches of Judaism are blatantly pro-LGBTQ and veer to the Left on sin and other issues.

Ivanka Trump, who converted to orthodox Judaism from Presbyterian Christianity before her 2009 marriage to Jared, is also under fire for secretly meeting with Planned Parenthood and other pro-abortion groups. Ivanka, like her husband, is now officially a senior adviser to the president, her father. She claims to be an advocate for “women’s issues” but will not comment on whether she is pro-life or pro-abortion “rights.”

Although Orthodox Jewish teaching on abortion is more nuanced than in Catholic and evangelical approaches, most abortions are condemned by most Rabbinic authorities.

Ivanka and Kushner have received widespread “credit” in various news reports for persuading President Trump to extend a pro-LGBT executive order on federal contractors started by Obama in 2014, as LifeSiteNews reported.

The power couple is also widely cited as having killed a prospective White House pro-religious-liberty executive order that conservatives had hoped for as protection against pro-homosexual government coercion.

Said Wolfson regarding his same-sex “marriage” activism: “I’m not in this just to change the law. It’s about changing society.”

Indeed, court-imposed same-sex “marriage,” like legalized abortion-on-demand before it, has already changed American society enormously. Even though the “zero-sum game” battle between “gay rights” and religious freedom has been going on for the last two decades, the advent of legalized homosexual “marriage” has accelerated the negation of religious liberties.

For example, the ACLU is backing a lawsuit against a Catholic high school in Charlotte, North Carolina, brought by a homosexual teacher who was fired after he announced on Facebook that he was “marrying” a man, LifeSiteNnew reported in January.

While there are ample press references to Mr. and Mrs. Kushner keeping the Sabbath and Jewish dietary laws, the media rarely cover the obvious conflict between the influential couple’s open social liberalism — especially their support of homosexuality and same-sex “marriage” — and their professed adherence to orthodox Judaism.

So what beliefs about sexual morality are typical for orthodox Jews and why are they important for civilizations?

Rabbi Noson Shmuel Leiter, founder of Torah Jews for Decency, describes the religion as follows: “Orthodox Judaism is totally subservient to The Divine Will, as revealed in the eternal, immutable Written and Oral Torah, given on Mt. Sinai, without any mysterious, paradoxical opt-out loopholes — escape clauses that allow changes to accommodate to ‘shifting moral paradigms.’”

“This is not a smorgasbord. Orthodox Judaism is not a ‘pick and choose’ religion,” said Rabbi Levin, sounding a lot like traditionalists Catholics who criticize “cafeteria Catholics” who reject politically incorrect Church doctrines they don’t like.

Popular Jewish talk show host Dennis Prager writes that Judaism “changed the world” by demanding “that all sexual activity be channeled into marriage.”

“The Torah's prohibition of non-marital sex quite simply made the creation of Western civilization possible,” Prager writes. “Societies that did not place boundaries around sexuality were stymied in their development. The subsequent dominance of the Western world can largely be attributed to the sexual revolution initiated by Judaism and later carried forward by Christianity.”

Jewish pro-family advocate Arthur Goldberg, in his book, ‘Light in the Closet: Torah, Homosexuality and the Power to Change,” writes that sexual purity is part of God’s call to be holy. He quotes Rabbi Samuel Dresner, who states that, “the first lesson of holiness is to remain sexually pure.”

In the same book, Goldberg quotes Rabbi Dr. Joseph Hertz, author of “Pentateuch and Haftorahs,” as saying, “The Rabbis deem sexual immorality the strongest of defilements, cutting man off from God.”

“Indeed,” writes Goldberg, “the Torah expressly implicates the sexual immorality of the Canaanites as one of the main reasons G-d took the land away from them and transferred it to the Israelites.”

How great an apostasy?

According to some orthodox rabbis and adherents to orthodox Judaism citing ancient Hebrew texts, Jared Kushner’s public advocacy for homosexuality-based “marriage” is a greater violation of his religion than if he were to practice sodomy himself. That is because he is leading others astray, said Rabbi Levin.

“On their spiritual resume they will have to give an account [to God] for the effect their pro-homosexual machinations will have on many tens of millions of American families and children—and their ability to lead biblically-based lives,” he told LifeSiteNews.

Note the parallel in the decline of orthodoxy and morality among Orthodox Jews with the same caused by apostate Christians.

“It’s exactly like Christianity,” Goldberg told LifeSiteNews. “The gay activists keep banging away, and people who should know better capitulate and compromise on truth.”

Levin said homosexual behavior — like other serious sins, such as adultery — rises to the level of a “death penalty offense” in the Old Testament (Leviticus 20:13), to show “how severe of a sin God sees this as.” He said the strong penalty in Scripture was intended to have a “deterrent effect” on the people of Israel, and others. (Only an insignificant, tiny fraction of a fraction of Jews and Christians support actual capital punishment for homosexuals or adulterers today; nearly all religious people with traditional, biblical perspectives on homosexuality instead favor helping men and women overcome their unwanted same-sex attractions.)

The U.K. Daily Telegraph reported in February that the Kushers are “keen supporters of gay rights,” glowingly portraying them as a “calming influence” on Donald Trump against “far right” and “ultra-conservative” forces, epitomized by Trump adviser Steve Bannon.

Ivanka Trump and Jared Kushner, as “moderates” inside the Trump administration, are under heavy pressure from fellow social liberals to restrain conservative policies in the White House — policies that many on the Left often mislabel as “extreme.”

This theme of rational, stabilizing “moderates” in the Trump administration countering conservative “extremists” is seen in a tweet by SpaceX entrepreneur and Trump adviser Elon Musk, who describes himself as “half Democrat, half Republican: “Activists should be pushing for more moderates to advise President, not fewer. How could having only extremists advise him possibly be good?”

On the other hand, concern from the opposite political spectrum about the Kushners’ anti-conservative sway in the Trump presidency extends far beyond social issues. Anti-radical-Islam activist Pamela Geller of the American Freedom Defense Initiative told Breitbart News Daily on April 7 that Kushner is a smart “Manhattan liberal” with “undue influence” in the Trump White House.

Defending religious liberty is not “extreme”

The ascendancy of the LGBTQ movement with its immense power in society, especially in the media and corporate worlds, has led many “gay” and “trans” activists to decry any attempts to pass laws protecting people’s right to oppose homosexuality as radical, bigoted, and hateful. Media routinely cast pro-religious liberty legislation as “anti-LGBT.”

But an essay by Marc Stern of the American Jewish Congress written about 14 years ago, before and after the Supreme Court’s 2003 Lawrence v Texas ruling decriminalizing Texas’ sodomy law, shows how far the debate over homosexuality has shifted in such a short time.

Noting that, “The Torah bans male homosexual intercourse,” Stern nevertheless takes a pessimistic view of the likelihood that social conservatives, including his fellow moral-minded Jews, can ever succeed in returning America to embrace God’s biblical view of morality. So he argues instead for mutual “moral agnosticism” in the law and culture whereby “not only must religious people not impose ‘traditional’ morality on those with more ‘modern’ [pro-homosexual] views, but ‘modernists’ [pro-LGBT advocates] have a reciprocal obligation not to impose their view on traditionalists.”

That was then. This is now. Many today would look at Stern’s thesis as quaint if not naïve. As they have all across the country, homosexual activists and allied liberals will fight intensely against any Trump or Republican plans to federally protect religious people’s freedom not to support homosexual “marriages” and “transgender rights.”

The question is: Will Ivanka Trump and Jared Kushner — despite claiming allegiance to God’s moral and spiritual laws — be the “trump card” for the LGBTQ lobby in shutting down even today’s minimal efforts to preserve citizen’s right to disagree with homosexuality?

Camenker of MassResistance says that even if Kushner and Trump try to appease their liberal friends by resisting pro-family measures from inside the White House, “It’s never going to work because they’re part of the Trump presidency now, and the liberals will never forgive them for that.”