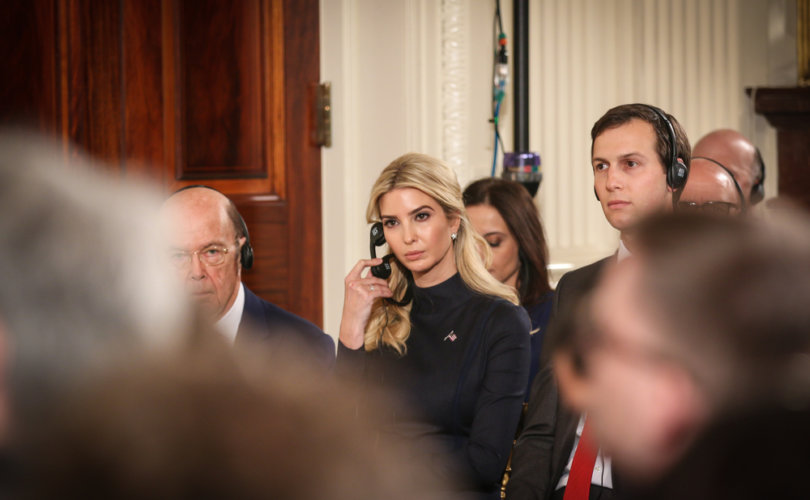 June 5, 2017 (LifeSiteNews) — First daughter and presidential adviser Ivanka Trump went out of her way to celebrate June as “LGBT Pride Month” on Twitter, but many homosexual and transgender activists were having none of it.

Neither was at least one fellow Orthodox Jew, who said it was “massively offensive” for Ivanka — as a professed follower of Orthodox Judaism — to “honor” homosexual “pride” in the same tweet mentioning Shavuot (Shavu’ot), the Jewish holiday Feast of Weeks celebrating God’s gift of the Torah to his people.

The Torah, the first five books of the Old Testament, is the basis for much of Judeo-Christian and Western law and moral tradition, which includes a proscription of homosexual acts as sinful. Ivanka Trump, like her husband Jared Kushner (also a Trump adviser), curiously embraces both Orthodox Judaism and the homosexual agenda, including same-sex “marriage.”

On June 1, Ivanka tweeted, “Logging back on after Shavuot, wishing everyone a joyful #Pride2017. This month we celebrate and honor the #LGBTQ community.” She also tweeted, “I am proud to support my LGBTQ friends and the LGBTQ Americans who have made immense contributions to our society and economy.”

LGBT activists, irate that President Donald Trump has chosen not to follow Barack Obama’s precedent of issuing a White House Proclamation honoring “LGBT Pride Month” every June, are savaging Ivanka for helping an administration that they’ve declared the enemy.

“Ivanka Trump's Pride Tweets Don't Make Her an LGBT Ally,” reads a headline for the homosexual magazine The Advocate. Under a picture of Ivanka is the caption, “No rainbow hashtag can fix what the Trump administration is doing.”

“Something about those Pride tweets struck a nerve with LGBT people. We’re sick of being used by Ivanka Trump as a prop. The straight and cisgender media ought to take note, because they’re the ones falling for this trick,” wrote Lucas Grindley in the accompanying Advocate essay.

Pro-LGBT Twitter users were more direct: “Who is this ‘we’ you talk about? Because your father isn't celebrating us – that's for damn sure!!” tweeted homosexual celebrity gossip blogger Perez Hilton.

“Watch what the Administration does – not what it says. #WeResist https://www.glaad.org/trump ,“ tweeted the LGBTQ “anti-defamation” media pressure group GLAAD.

Ivanka Trump and Jared Kushner’s simultaneous embrace of homosexuality and Orthodox Judaism has deeply offended traditional Orthodox Jews like Brian Camenker, founder and president of the pro-family group Mass Resistance, based outside Boston.

“You can’t be serious as an Orthodox Jew and support the ‘gay’ agenda,” Camenker, who attends an Orthodox synagogue in Newton, Massachusetts, told LifeSiteNews in April.

When he heard about Ivanka’s June 1 “LGBT Pride Month” tweet, Camenker said, “To be Jewish and to celebrate the giving of God’s Law — and then turn around and promote homosexual sodomy, which directly contravenes divine law — is just massively offensive. … I struggle to even put it into words.”

“You can’t make this stuff up,” Camenker told LifeSiteNews. “It’s hard to go any lower than that.”

“For someone who claims to be Orthodox and to do this is an incredible affront to Orthodox Jews everywhere,” he said.

Ivanka Trump, who converted to Orthodox Judaism from Presbyterian Christianity before her 2009 marriage to Jared, is also under fire for secretly meeting with Planned Parenthood and other pro-abortion groups.

Referencing self-professed Christians like Jim Wallis who have become apologists for a homosexuality-affirming version of the faith, Harvey told LifeSiteNews, “What does basic faithfulness mean anymore? What do ancient, divinely-inspired texts and established doctrines mean if you can pretend to honor them while so cavalierly celebrating sexual sin?”

“The good news,” said Harvey, founder and president of the Ohio-based group Mission America, “is that Donald Trump is officially not celebrating homosexual and transgender ‘pride.’ At least the president did not cave in.”

Former homosexual and one-time “gay” activist Greg Quinlan, who is now a Christian pro-family activist, said Ivanka should not be surprised at how poorly her “gay pride”-honoring tweets have been received by the LGBTQ lobby.

“Don’t you know that your support of the LGBTQ movement is hurting your father? The gay activists don’t care about your support now that you have an ‘R’ [for Republican] after your name,” Quinlan told LSN.

Ivanka and Kushner have received widespread “credit” in various news reports for persuading President Trump to extend a pro-LGBT executive order on federal contractors started by Obama in 2014, as LifeSiteNews reported.