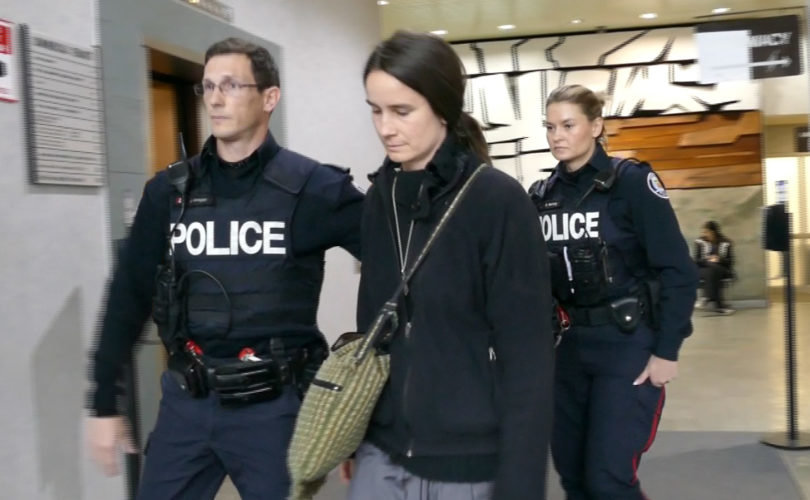 “I’ve done nothing wrong,” the 41-year-old said during a brief appearance via video from a Milton jail to the Old City Hall Court in downtown Toronto.

Wagner was arrested December 12 while trying to counsel women against abortion at Toronto’s Bloor West Village Women’s Clinic, located on the fourth floor of an office complex at 2425 Bloor Street West.

She is charged with two counts of failure to comply with a probation order, and one of causing mischief under $5,000.

Wagner refused bail in her three previous court appearances, and did so again December 23, because these mandate that she stay a certain distance away from abortion centers.

“I’d be very happy if you could release me” without having to sign a bail order, Wagner told the Court, but reiterated: “I’ve made it clear I’m not prepared to sign any bail conditions.”

Because Wagner also has refused a lawyer and is representing herself, the Court ruled she must be brought to court in person from jail to receive disclosures of evidence. Her next appearance at Old City Hall Court is scheduled for Christmas Eve at 9:00 a.m.

Linda Gibbons, 67, is also in jail in Milton’s Vanier Center for Women, awaiting trial on January 13 for disobeying a court order. She was arrested September 2 while peacefully walking back and forth in front of the Morgentaler abortion facility on Hillsdale Avenue.

Gibbons has spent an estimated 11 years behind bars for her peaceful witness for life outside Toronto’s abortion facilities.

Wagner has been arrested an estimated ten times and spent almost four years in jail over the last 16 years for her non-violent attempts to save women and their unborn children from the violence of abortion.

She urges people to think not of her, but of the mothers and unborn children, writing in an open letter published April 2015 on the Witness for Church and Pope blog: “Linda and I, (as others), go to love – to strive to love – these little ones who only have minutes to live; they are scheduled to be killed today. We may not succeed in protecting the babies; but we strive to be faithful and to do the best we can while relying and trusting in God ‘who works all things together for the good…’ (Rom 8:28), not stopping at a legal boundary unjustly imposed.”