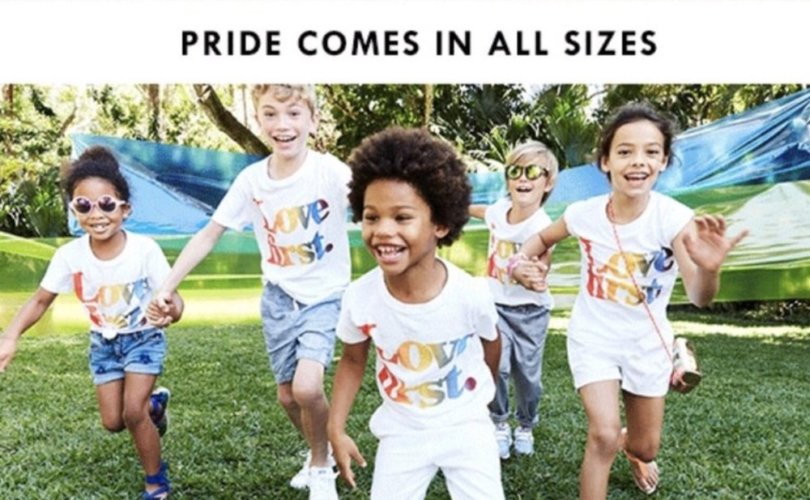 May 31, 2018 (LifeSiteNews) — A popular clothing retailer is launching a line of rainbow-themed apparel for June’s “LGBT Pride Month,” targeting children and fundraising for a pro-homosexual lobbying group in the process.

J.Crew has revealed its “Love First” collection on its website, a selection of T-shirts, socks, and a tote bag featuring the phrases “love first” and “love to all.” Some of the items feature a rainbow motif, while others are adorned with the logo and the color scheme of the left-wing lobbying group Human Rights Campaign, to whom the company is donating 50% of the items’ purchase price.

“HRC is America’s largest civil rights organization working to ensure LGBTQ people are safe, equal and free in every community,” the company claims. HRC donates heavily to Democratic candidates including Hillary Clinton, opposes religious adoption agencies’ right to operate in accordance with their beliefs, and has gone to court to force small towns to accept “gay pride” parades.

You’ve lost my business @jcrew. Please leave our kids out of this. pic.twitter.com/oPJININBEl

J.Crew has also set aside Saturday, June 9 as a special “pride” day in their stores, where customers can “[g]et ready for a parade or just come in and share the love with free flags, temporary tattoos and so much more!”

This is just the latest in a long line of pro-homosexual moves by the retailer, which has featured same-sex couples in its catalogs for years and featured same-sex “wedding” editorials on its website. Its former president and creative director Jenna Lyons dated Courtney Crangi from 2011 to 2017.

The pro-homosexual clothing comes shortly after the company came under fire for partnering with progressive online shirt retailer Prinkstop to offer “I am a feminist too” T-shirts, intended specifically for boys and also for children as young as two.

The product description says the shirt is meant to teach boys that “women deserve Equal Pay, Equal Rights, Equal Respect.” A portion of the proceeds for each shirt goes toward the United Nations Foundation’s Girl Up campaign, which largely focuses on health, safety, and violence in several third-world nations, but also endorses “reproductive health and rights,” which is commonly a euphemism for abortion.

Pro-homosexual activists are naturally cheering J.Crew’s “Love First” campaign, but others have responded with harsh criticism.

Commentary Magazine’s Sohrab Ahmari called it “repugnant” to “frame children at that age as sexual and sexualized beings, whatever the orientation.”

“What defines homosexuality is a sexual appetite for intimate physical activities with people of the same sex,” Catholic Vote’s Stephen Herreid noted. “Introducing it to minors means explicitly discussing arousal and genital contact with kids. The idea of strangers introducing homosexuality to children is unacceptable.”