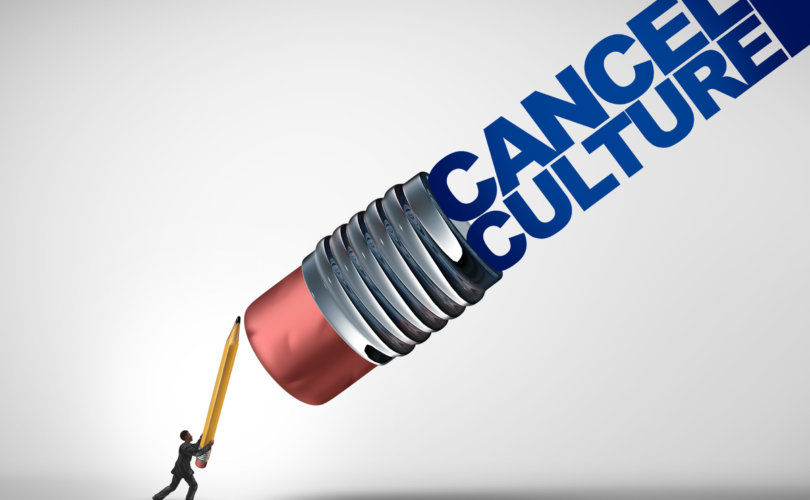 NEW YORK, July 8, 2020 (LifeSiteNews) ― A group of prominent authors and academics has signed a letter protesting the rise in “cancel culture” censorship.

While believing the current furor in the USA over allegations of police brutality is justified, the authors and scholars argued that enforced “ideological conformity” is not.

“Powerful protests for racial and social justice are leading to overdue demands for police reform, along with wider calls for greater equality and inclusion across our society, not least in higher education, journalism, philanthropy, and the arts,” they wrote.

“But this needed reckoning has also intensified a new set of moral attitudes and political commitments that tend to weaken our norms of open debate and toleration of differences in favor of ideological conformity. As we applaud the first development, we also raise our voices against the second.”

While calling the President of the United States a “real threat to democracy” and a “powerful ally” of “the forces of illiberalism,” by which the signatories seem to mean nationalist and populist movements, they said resistance to these “forces” should not “harden into its own brand of dogma or coercion.”

They allege, without example, that “right-wing demagogues” are already exploiting this leftist intolerance.

“The democratic inclusion we want can be achieved only if we speak out against the intolerant climate that has set in on all sides,” they said.

Bizarrely, the authors and academics continued to vilify conservatives while addressing left-wing censorship.

“The free exchange of information and ideas, the lifeblood of a liberal society, is daily becoming more constricted,” they wrote.

“While we have come to expect this on the radical right, censoriousness is also spreading more widely in our culture: an intolerance of opposing views, a vogue for public shaming and ostracism, and the tendency to dissolve complex policy issues in a blinding moral certainty.”

The signatories spoke up in defense of members of the literary classes whose livelihoods are put at risk when “institutional leaders, in a spirit of panicked damage control” deliver “hasty and disproportionate punishments instead of considered reforms.”

Editors, authors, journalists, professors, and “head of organizations” who have been fired, deplatformed or investigated for doing their jobs or making “clumsy mistakes” have the writers’ sympathies.

“We are already paying the price in greater risk aversion among writers, artists, and journalists who fear for their livelihoods if they depart from the consensus, or even lack sufficient zeal in agreement,” they wrote.

The authors believe that the cancel culture will hurt the powerless and democracy in general and suggest that “exposure, argument, and persuasion” are the way to defeat “bad ideas.”

“We refuse any false choice between justice and freedom, which cannot exist without each other,” they wrote

“As writers, we need a culture that leaves us room for experimentation, risk taking, and even mistakes. We need to preserve the possibility of good-faith disagreement without dire professional consequences. If we won’t defend the very thing on which our work depends, we shouldn’t expect the public or the state to defend it for us.”

“I see only a collection of spineless liberals who never spoke out when cancel culture came for conservatives but now express concern when it’s affecting the intelligentsia. And how do they respond? With mild chiding, as if the far left are children to be scolded,” tweeted Ian Miles Cheong of the online Human Events magazine.

Other readers objected to the inclusion of J.K. Rowling and other perceived so-called “TERFs” (Trans-Exclusionary Radical Feminists). Recently Rowling infuriated transgender activists by advocating that women-only spaces be reserved to real women.

“Really hope 149 people release a separate clarifying statement that it's OK to ratio JK Rowling for being wrong and f**** awful. She's the intolerant one,” tweeted Brett Banditelli.

Experiencing backlash from the left, two of the left-wing authors have already asked for their signatures to be removed. Jennifer Finney Boylan, a transgender activist, has apologized for signing the letter, possibly because J.K. Rowling also signed it.

“I did not know who else had signed that letter,” Boylan wrote on Twitter.

“I thought I was endorsing a well-meaning, if vague, message against internet shaming. I did know Chomsky, Steinem, and Atwood were in, and I thought, good company. The consequences are mine to bear. I am so sorry.”

Kerri Greenidge, a specialist in African American history, has also distanced herself from the letter.

“I do not endorse this @Harpers letter,” she wrote on Twitter.

“I am in contact with Harper's about a retraction.”

Russian postdoctoral student Ilya Kotlyar told LifeSiteNews that the situation of left-wing scholars and writers being cancelled by other left-wingers reminded him of the fate of certain Soviet-era painters.

“One painter I am thinking of was Kasimir Malevich (1879-1935), an avant-gardist,” Kotlyar said via social media.

Initially a darling of the Soviet regime, Malevich painted revolutionary posters and had permission to travel abroad.

“Then Malevich was arrested twice, in 1927 and 1930, under suspicion of espionage,” Kotlyar added.

“He was eventually released, but avant garde was out of favor. He died five years later.”