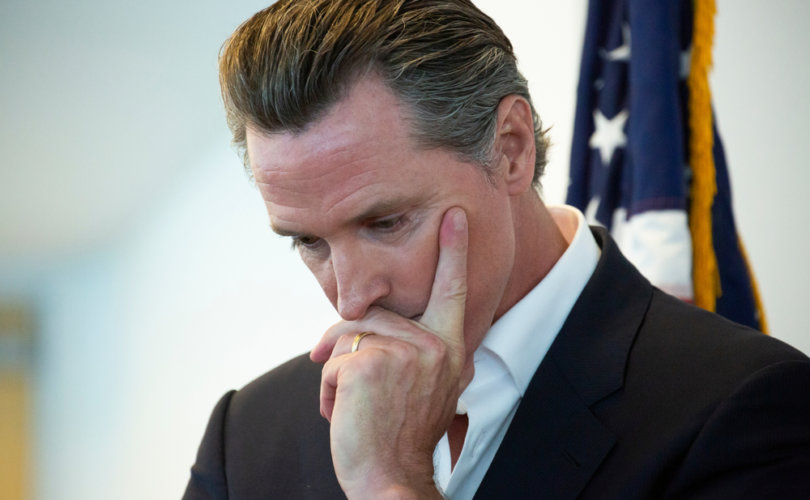 SACRAMENTO, California (LifeSiteNews) — California Democrat Gov. Gavin Newsom, one of the most prominent supporters of COVID jab mandates in the United States, is facing criticism for his efforts to stop a vaccine mandate affecting members of a union that donated $1.75 million to help him survive this summer’s recall election.

The news comes after Newsom told CBS News “we need to stiffen our spines and lean into keeping people safe and healthy,” arguing in favor of increasing mandates by saying “[w]e shouldn’t be timid in trying to protect people’s lives and mitigate the spread and transmission of the disease.”

One vaccine mandate Newsom does not support, however, is the one affecting the members of the California Correctional Peace Officers Association (CCPOA), a powerful state prison guard union that helped bankroll Newsom’s recall success with a massive $1.75 million campaign donation in July.

Representing 28,000 officers statewide, the CCPOA came out strongly in support of the medical freedoms of its members, arguing that prison workers ought to be allowed to voluntarily choose or decline vaccination.

The union has spent the summer fighting a California Department of Public Health (CDPH) order requiring “paid and unpaid individuals who are regularly assigned to provide health care or health care services to incarcerated people, prisoners, or detainees to show evidence of full vaccination against COVID-19 by October 14, 2021, unless they qualify for an accommodation based on a sincerely held religious beliefs or due to qualifying medical reason(s).”

In response to the mandate, the CCPOA argued that “[m]andating universal vaccination of staff … seems at odds with the dramatic reduction in COVID-19 infection rates within the prisons, and throughout the State generally, in recent months.”

While it encourages its members to voluntarily get the shots, the CCPOA argued that “a mandatory vaccination program under the threat of termination will be difficult to implement, will negatively impact the State and its employees by detracting from other mitigation efforts, and may undermine progress already made.”

The union fighting against vaccine mandates has surprisingly received support from Gov. Newsom, whose lockdown policies and mandates have been widely regarded as some of the strictest in the nation.

Earlier this year, Newsom announced vaccine mandates for state workers and teachers, including state firefighters and law enforcement officers. Californians subject to the mandates who fail to get the jab or obtain an approved exemption must submit to frequent COVID-19 testing or lose their jobs. On October 1, the California governor announced he would require all “eligible” children get the COVID jab in order to attend public or private in-person school in the Golden State.

While enacting mandates for vast swathes of the California population, however, Newsom has spent months resisting a mandate that would force thousands of prison workers to get the injection as a condition of employment, Cal Matters reported.

A report by KCRA noted that “[w]hile Gov. Gavin Newsom has mandated all state employees to get vaccinated or submit weekly COVID-19 tests, Newsom opposed a separate order that would require guards to be vaccinated by the end of November.”

SFGATE commented that “Newsom’s hostility towards the mandate for prison guards does not align with his previous statements on COVID mitigation efforts, including vaccine mandates.”

Newsom’s hostility towards the mandate for prison guards does not align with his previous statements. https://t.co/LtZkV1Qm6l

On Tuesday, Newsom’s administration stepped in to protect CCPOA members in court, appealing the prison worker vaccine mandate to the Ninth Circuit Court of Appeals after a federal judge ruled Monday the workers would be required to take the shot.

On Wednesday, Kern County Superior Court Judge Bernard Barmann issued a temporary restraining order against the mandate, stalling its enforcement while the court considers a request for a preliminary injunction.

The apparent about-face from Newsom has led to speculation the pro-lockdown governor was motivated by financial interests to help the “politically powerful union,” which had donated $1.75 million to help him stay in office during the September gubernatorial recall election

According to the Daily Wire, the CCPOA opted to support Newsom in the opposing the recall effort after Newsom’s administration sent out $5,000 pandemic bonuses and raises for its correctional officers.

“Newsom is now asking a Court of Appeals to remove the vaccine mandate for a union that gave him $1.75 million,” wrote California legislator Kevin Kiley, who ran to replace Newsom in the recall election.

“Every other mandate needs to go immediately,” Kiley suggested.

Newsom is now asking a Court of Appeals to remove the vaccine mandate for a union that gave him $1.75 million. Every other mandate needs to go immediately.

Writing for Reason.com, C.J. Ciaramella called the apparent contradiction by the Newsom administration “[a] fable of political power in our times,” adding that “Gavin Newsom is proud of requiring students to get vaccinated but is going to court to protect California’s powerful prison guard union from a mandate.”

A fable of political power in our times: Gavin Newsom is proud of requiring students to get vaccinated but is going to court to protect California’s powerful prison guard union from a mandate. https://t.co/nAQaek71Cj

“The power dynamics at play here are not subtle or hard to divine,” Ciaramella said.

“California is insisting that school children get vaccinated, while simultaneously fighting to protect prison guards from a vaccine mandate, because students, who are at very low risk of serious COVID-19 complications compared to older age brackets, don’t have a public sector union with deep pockets

“This is not ‘following the science’ or leaning in, It’s just naked machine politics, another example of hypocritical ‘rules for thee, not for me’ policy making that spread like, well, an epidemic during the past year and a half,” Ciaramella said.