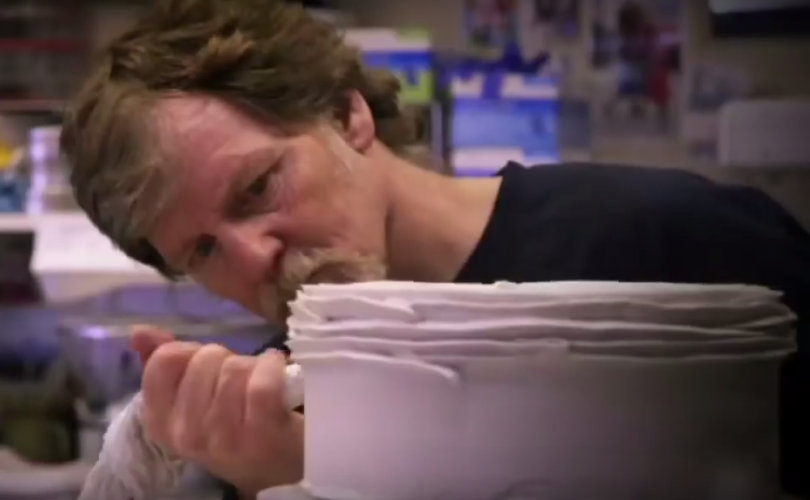 (LifeSiteNews) – Christian baker Jack Phillips was back in court last week defending his right not to create cakes that affirm LGBT ideology, more than four years after the U.S. Supreme Court declined an opportunity to conclusively settle the matter.

In 2018, Autumn Scardina filed a complaint against Phillips, the proprietor of Masterpiece Cakeshop, for declining to bake a cake that would be pink on the inside and blue on the outside to celebrate his “transition” from male to female. Two days later, Colorado Civil Rights Division (CCRD) director Aubrey Elenis claimed there was probable cause to conclude Phillips had unlawfully denied Scardina “equal enjoyment of a place of public accommodation.”

In March 2019, the state Attorney General’s office announced that it and Phillips’ attorneys have “mutually agreed to end their ongoing state and federal court litigation,” including the CCRD action against Phillips, though the agreement did not preclude Scardina from filing a civil suit of his own in state court, which he did.

Last year, Denver District Judge A. Bruce Jones ruled that Phillips had violated the state’s anti-discrimination law, rejecting his argument that baking the pro-trans cake would constitute compelled speech and claiming his refusal was “inextricably intertwined” with denial of Scardina’s “gender identity.”

Now, the Associated Press reported that ADF attorney Jake Warner, who is representing Phillips, appeared in court last Wednesday to argue for the reversal of that ruling on both free speech and religious freedom grounds, as well as procedural grounds. He maintained that Scardina was supposed to file an appeal with the state appeals court first, and the judge who heard the case instead lacked jurisdiction.

“This activist attorney, Autumn Scardina, called up Jack and asked Jack to create a custom pink and blue cake celebrating a gender transition,” says ADF attorney Jonathan Scruggs. “That’s something the trial court even acknowledged. This attorney has been harassing Jack for … numerous years, emailing Jack, calling him a bigot and a hypocrite, and asking Jack to create a custom cake depicting Satan smoking marijuana.”

Phillips’ years of ongoing legal battles stem in large part from the nation’s highest court declining to issue a clear ruling on the core issues of the dispute when it had an opportunity to do so. Instead of clearly affirming that Phillips’ First Amendment rights had been violated, as conservative Justices Clarence Thomas, Samuel Alito, and Neil Gorsuch had advocated in concurring opinions, former Justice Anthony Kennedy’s majority opinion found that the state civil rights commission had displayed a “clear and impermissible hostility toward” the baker’s “sincere religious beliefs.”

ACLU attorney David Cole, who represented the gay couple that sued Phillips, wrote at the time that his side had “lost a battle but won the war,” interpreting Kennedy’s words to mean that absent such hostility, “states are free to require businesses, including bakers, to serve gay and lesbian customers equally, including in the provision of wedding cakes.” Cole went so far as to say the plaintiffs “could go right back into Masterpiece Cakeshop today and request a cake to celebrate their wedding anniversary.”

As a result, Phillips has “been in litigation for almost 10 years,” Scruggs lamented, though the attorney is optimistic about the future. “At the end of the day, he’s won his prior attempts in court — at the U.S. Supreme Court and then once before at a lower court — and we’re hopeful that he’ll win this case again.”