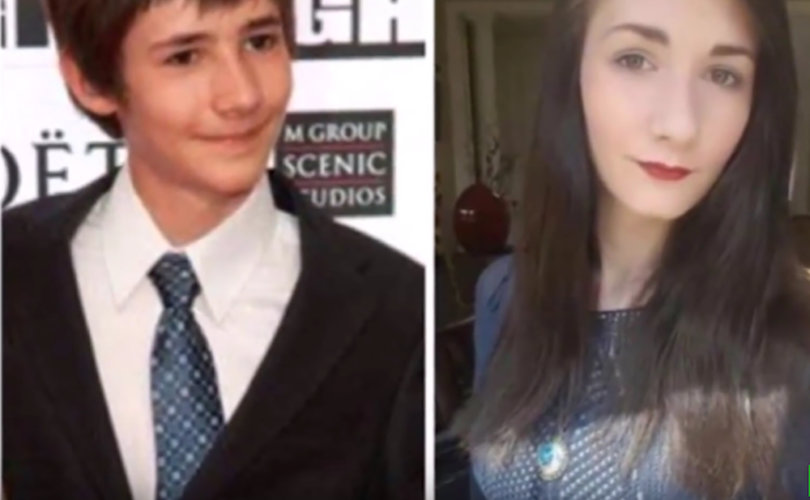 ERIE, Pennsylvania, March 1, 2017 (LifeSiteNews) – A Pittsburgh-area school must give students access to the restrooms of the opposite sex if it matches their gender identity in a case involving the brother of singer Jackie Evancho, a federal judge ruled Monday.

U.S. District Court Judge Mark Hornak issued a temporary injunction banning Pine-Richland School District from enforcing its policy stipulating that “transgender” students either use single-person bathrooms or facilities in accord with their biological sex.

Plaintiffs in the case are three Pine-Richland High School students, including Jackie Evancho's brother, Jacob “Juliet” Evancho, who identifies as “transgender.” The others are Elissa Ridenour and a student identified only as A.S.

Evancho and Ridenour are males age 18 or above. A.S., a female student, was listed in courts documents as a minor.

Two of the students used restrooms corresponding with their “gender identity” for years with no issues, Buzzfeed reported, until 2016 when a parent of a student at the school made an inquiry.

Court records indicate the families of all three students had met individually with school officials to inform them of their children’s “transgender” status, and that in each case school leadership was on board with treating them in accord with their “gender identity.”

Evancho’s family had sued the school after its board passed “Resolution 2” last September, a return to the long-standing policy of students have the choice between using facilities that correspond to their biological sex or unisex facilities.

Jacob/“Juliet” Evancho said a separate unisex bathroom was not acceptable “because it marginalizes us. It makes us feel even more separated.”

Hornak determined that the Constitution’s equal protection clause does provide relief for the students and that they are likely to prevail on those claims.

“The Plaintiffs appear to the Court to be young people seeking to do what young people try to do every day-go to school, obtain an education, and interact as equals with their peers,” Hornak wrote. “[T]he Plaintiffs have shown a reasonable likelihood of success on the merits of their claim that the District’s enforcement of Resolution 2 as to their use of common school restrooms does not afford them equal protection of the law as guaranteed to them by the Fourteenth Amendment.”

He concluded, however, they did not have a reasonable likelihood of success on the merits of their Title IX claim.

President Trump has promised from the campaign trail to reverse the order and leave the issue to the states.

Jackie Evancho, 16, who sang at President Trump’s inauguration, said she was “obviously disappointed” upon learning that Trump reversed Obama’s “transgender” mandate, “and I realized that we would need to take action in order to enlighten the administration on everything.”

On February 22, she tweeted to the president, “2realdonaldtrump u gave me the honor 2 sing at your inauguration. Pls give me & my sis the honor 2 meet with u 2 talk #transgender rghts.”

White House Press Secretary Sean Spicer told a reporter at a news conference the following day he thought Trump would welcome the idea of meeting with her.

Gay activist group Lambda Legal is representing the students in their suit against the school.

Lambda Legal staff attorney Omar Gonzalez-Pagan praised Hornak’s ruling in a statement Monday, saying, “Such policies are not only wrong, they are illegal. The rescission of a guidance by the Trump administration cannot change that.”