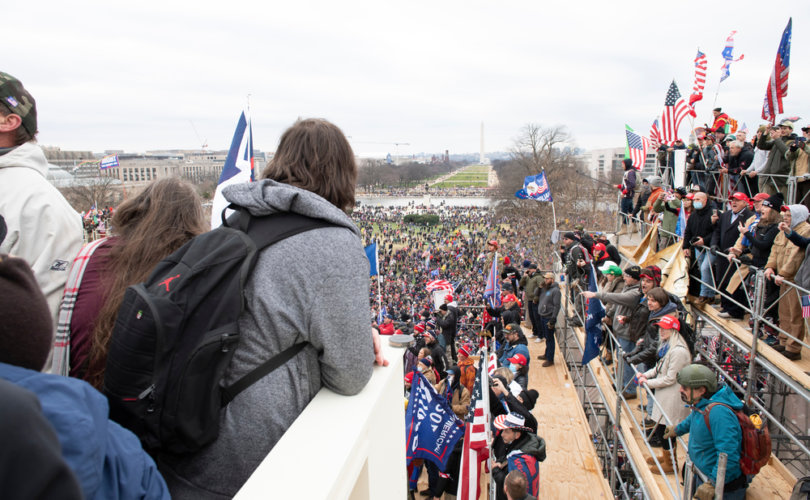 WASHINGTON (LifeSiteNews) — A man accused of attacking a police officer during the Capitol riot on January 6 has been released from custody after he wrote a letter denouncing former President Donald Trump and parroting President Joe Biden’s “Build Back Better” slogan linked to a movement to restructure U.S. and global economies along socialist lines.

35-year-old Thomas Sibick, who has been held in a Washington, D.C., jail without bail since March, was released to the custody of his parents after he wrote a letter to U.S. District Judge Amy Berman Jackson saying he now “loathe[s]” Trump and holds him “ultimately responsible” for the disturbance at the Capitol in which Trump-supporters protested the final counting of electoral votes in the 2020 presidential election.

“January 6th was a disgrace to our nation that left a scar Trump is ultimately responsible for,” he wrote in the letter, adding that “[w]hile many praise Trump I loathe him.”

Sibick told Judge Jackson his behavior on January 6 — allegedly joining a group of rioters who assaulted and robbed D.C. police officer Michael Fanone — was “unequivocally an aberration of the high moral standards I hold myself to,” and that he was “consumed by the mob mentality.”

Thomas Sibick wrote a letter to Judge Jackson saying he now “loathes” Donald Trump and that Trump should be “ostracized” from society. You can read it here: https://t.co/RC5q7BZ1M6

Asking to be released from custody, Sibick told Judge Jackson all he now desires is “peace, reconciliation, and unity,” and to “work together to build back a better nation.”

“Build Back Better” is a phrase frequently employed by Biden on both the campaign trail and in the White House.

The slogan also lends its name to Biden’s multi-trillion-dollar “Build Back Better Agenda” which the Heritage Foundation, a conservative think-tank, has called “a Trojan horse to hide a socialist agenda that would add trillions to the budget, hike taxes, and centralize federal power,” and the South China Morning Post said “takes a page out of China’s playbook.”

The “Build Back Better” mantra has also been linked to an openly discussed global agenda to use the chaos created by governments’ responses to the COVID-19 pandemic to fundamentally alter the world’s economies and replace them with centralized and redistributive socialist systems while uprooting traditional cultural norms.

Last year, as the first effects of COVID-19 lockdowns and top-down control were beginning to be felt by citizens of nearly all developed nations, the World Economic Forum argued that “[t]o build back better, we must reinvent capitalism.”

Pope Francis also picked up the phrase, writing in a December tweet, “To help our society to ‘build back better’, inclusion of the vulnerable must also entail efforts to promote their active participation.”

This summer, the G-7 Summit of world leaders held a distinctly “Build Back Better” themed meet-up, with U.K. Prime Minister Boris Johnson saying he was interested in “building back better, building back greener, building back fairer, and building back more equal and in a more gender-neutral and perhaps more feminine way.”

This year’s @G7 Summit will be all about how we #BuildBackBetter pic.twitter.com/2XpSbhB3VC

In addition to denouncing Trump and employing the politically loaded phrase associated with the agenda opposed by Trump during his tenure, Sibick promised the judge he would never again engage in public political dissent.

“I have vowed to never attend another political protest in my life, that was my first and last! In addition, I will never allow myself to be consumed by the mob mentality, it is dangerous and undoubtedly out of character,” he said, explaining that “[t]hroughout my incarceration I have had ample time for self-reflection which has enabled me to grow and become more cognizant of my being, ultimately having a profound impact on my core values.”

People arrested for involvement in the events of January 6 have been held in a “unit” of a D.C. jail as they await trial or bail. American Greatness senior editor Julie Kelly argued that those held in custody are “political prisoners” kept in “harsh almost solitary confinement conditions.”

On Tuesday, Judge Jackson made the decision to release Sibick from the D.C. jail and into the custody of his parents pending trial.

Fischer reported that Sibick “will be under 24-hour home incarceration, must stay away from D.C. and any political rallies and must continue his psychiatric treatment. No firearms. Can’t watch any political TV programming. No social media.”

Judge Jackson releases Thomas Sibick to the custody of his parents. He will be under 24-hour home incarceration, must stay away from D.C. and any political rallies and must continue his psychiatric treatment. No firearms. Can’t watch any political TV programming. No social media.

“Judge Amy Jackson released a J6 defendant from pre-trial custody after he disavowed Trump in a letter and his lawyer suggested a political conversion,” reacted political commentator Mike Cernovich. “I’ve never seen anything like this — ever.”

Judge Amy Jackson released a J6 defendant from pre-trial custody after he disavowed Trump in a letter and his lawyer suggested a political conversion.

Responding to Cernovich’s comments, retired Colonel Robert Maness, a 32-Year U.S. Air Force Combat Veteran and former B-1 Squadron Commander, said, “The Soviet Union and Communist China has this type of authoritarian non-justice. I am ashamed more every day that I spent 32 years defending this liberty destroying country.”

Sibick was indicted in April in federal court on ten charges related to the January 6 fracas, none of which involve “insurrection.”

To date, none of the protesters charged in connection with the disturbance at the Capitol have been formally accused of “insurrection,” despite the frequent use of the term by media members, government officials, and others.