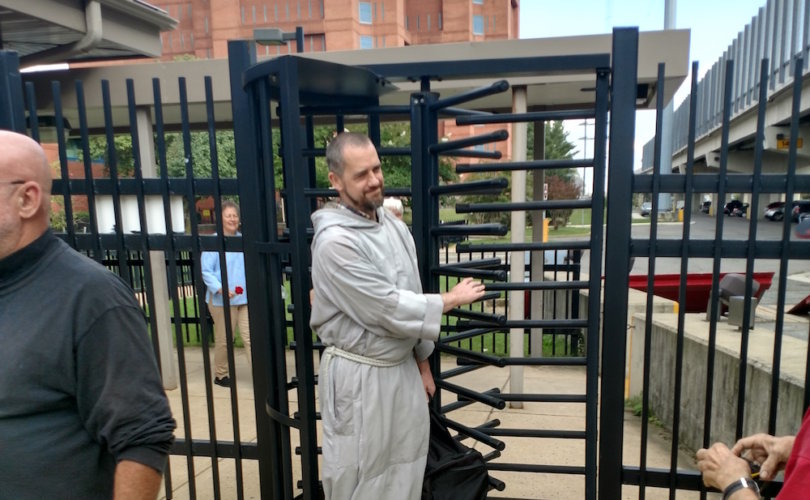 ALEXANDRIA, September 18, 2017 (LifeSiteNews) — A priest arrested Friday at a Virginia abortion center says these are the “modern day Calvary” and that he had a “moral obligation” to take part in the peaceful attempt to rescue women and unborn children from the violence of abortion.

“The Church needs to be there,” Fr. Fidelis Moscinski told LifeSiteNews.

“Just as the Blessed Mother and St John were present at Calvary where the innocent blood of Jesus was shed, Christians need to be at the modern day Calvary interceding, praying, offering compassion, alternatives, but most of all offering love and a witness of sacrifice that affirms the precious value of these children,” he said.

“I was convinced I had a moral obligation to participate in this rescue not only as a Christian but especially as a Catholic priest.”

“Because otherwise our lack of actions calls into question the credibility of our, and sincerity of our beliefs,” added Moscinski, a member of the Franciscan Friars of the Renewal in the Bronx, New York.

Four pro-life advocates also entered the Northland Family Planning in the Detroit suburb of Sterling Height the same morning as part of the rescue.

They were Monica Migliorino Miller, Will Goodman, Abby McIntyre and Matthew Connolly.

All ten were arrested.

Those arrested in Detroit were charged with trespass and released around 11:30 a.m.  According to Migliorino Miller, they are seeking trial by jury and will be defended by American Freedom Law. The trial date has not yet been set.

The six arrested in Alexandria were charged with trespass and obstruction of justice and released about 4:30 p.m. They are scheduled to be arraigned on Thursday.

The Red Rose Rescue was “modeled after the pro-life rescue activity of well- known Canadian activist Mary Wagner, who has repeatedly entered Toronto abortion centers and offered red roses to mothers waiting to have their children aborted,” the group’s press release stated.

Wagner, 43, has spent five years in jail for her pro-life witness, and was present at the Detroit rescue as prayer support.

“I was convinced I had a moral obligation to participate in this rescue not only as a Christian but especially as a Catholic priest,” Moscinski, 47, told LifeSiteNews.

“There’s a quote from the Gospel of Life which is very important,” he added, referring to Pope Saint John Paul II’s 1995 encyclical.

“In some ways and in some areas it’s very good. But when it comes to knowing the places and the times when some of these children are being aborted, the lack of presence, particularly of people in the Church and clergy, is a real indictment,” he added.

“Obviously, the direct intervention that we participated in is not for everybody to do,” Moscinski said.

“But it is at least for some people to do and in my particular Franciscan vocation, it’s clear in terms of my identity that as friars we have a responsibility to give a public and prayerful witness to the sanctity of life.”

Indeed, the Franciscan Friars of the Renewal fully supported his involvement in the rescue, according to a statement it released Friday.

“And certainly God always provides the graces we need to make these acts of love and sacrifice, and it could be that there might be a jail sentence subsequently,” Moscinski said.

“But, as you know, a number of years ago there were thousands of Christians risking arrest and many of them were imprisoned.”

Moscinski, who was involved in that rescue movement before entering the Franciscans in 1992, said more people were arrested for this pro-life witness than during the civil rights movement.

Indeed, many credit her five-year sentence in 1985 as galvanizing the rescue movement, which peaked in the early nineties.

Priests and bishops were also arrested during that time, including Bishop George Lynch and Bishop Austin Vaughan, Moscinski told LifeSiteNews.

“So if it was effective, worthy, and necessary then, it’s still effective, necessary, and worthy to do now,” he added.

It’s not known yet if any babies were saved as a result of the September 15 Red Rose Rescue.

“The primary intention was to reach out to the mothers and children on the day,” Moscinski said.

“We know for sure certain people walked out of the [abortion center] waiting room. It wasn’t confirmed, as far as I know, whether they decided against abortion or they just wanted to leave at that time,” he added.

“Obviously, I would love to see rescues continue and grow, and more people to become involved,” Moscinski said.

“Each of us just needs to be faithful to what God is calling us to do here and now today, and what happens in the future is in God’s hands.”

Two women entered University of New Mexico Center for Reproductive Health in Albuquerque New Mexico on Friday, to give out roses, but chose not to risk arrest.