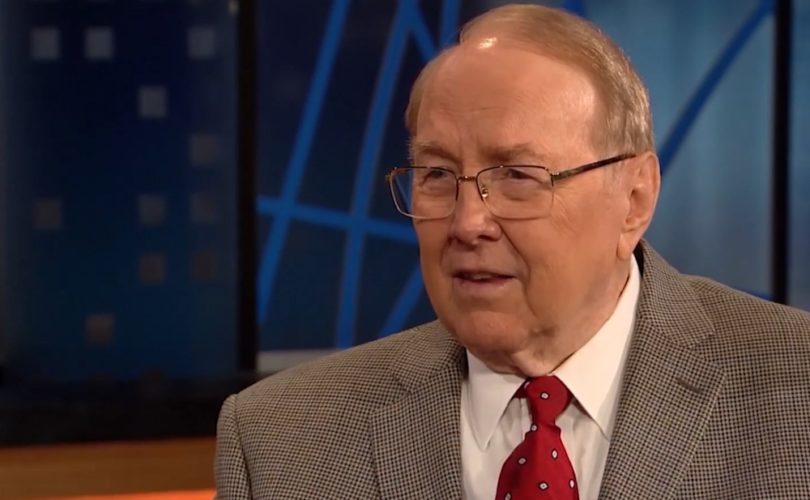 April 6, 2021 (LifeSiteNews) — Christian conservative leader James Dobson is urging Americans to take a public stand before it’s “too late” against President Joe Biden’s “radically-left agenda” that has brought the nation to a point where it is “teetering on the edge.”

“It’s more clear than ever that our nation is teetering on the edge,” said Dobson, who has advised five presidents on faith and family matters over four decades, in a March 26 piece published on his website.

“Are Christians, at long last, aware of this horrible reality? And are we finally ready to stand up and let our voices be heard, before it is forever too late?” he added.

Dobson, a psychologist and author, founded pro-family organizations Focus on the Family and Family Research Institute. He is now leading the Dr. James Dobson Family Institute.

Commenting on Biden’s first press conference, he said the president has acted as a “divider.”

“Joe Biden has acted as a divider, rather than fulfill his promise to unite the country. He has advanced far-left policies — most often by executive order — and continues to blame President Trump for problems that he is creating, even as he takes credit for successes he inherited,” he said.

“Through it all President Biden nevertheless accuses Republicans of ‘continu[ing] the politics of division.’ (He even questioned whether the Republican party would still be here in 2024?!) How this man could say such things with a straight face is beyond me. Yet, it seems that he is willing to say anything to cram his radically-left agenda down the throats of all Americans,” he added.

Dobson said that “freedom-loving Americans and people who hold true to our Judeo-Christian values should rightfully be outraged” over Biden’s “lies” and his plans for a “radical re-making of America.”

In a February newsletter, Dobson spelled out more concretely his fears regarding what he see Biden doing to America.

“Tragically, from his first day in office, President Joe Biden began to reveal his radical agenda for our nation. When joined with the influence of Nancy Pelosi and Chuck Schumer, a sweeping takeover by the radical left is occurring at lightning speed. They have seized power in all three branches of government, and it is operating pell-mell without checks and balances. The movement we are witnessing actually began more than a half-century ago with the objective of creating a socialist-totalitarian state. Suddenly, it appears to be within reach,” he said.

“This is a deeply troubling time for those of us who love our constitutional republic. Who would have believed that a coup of this scope could occur overnight within this greatest nation on earth? Cherished freedoms that have been enjoyed and protected for 232 years are now in serious jeopardy. Among them are religious liberty, free speech, and the right to own and bear arms. Everything that has defined America is being threatened or destroyed,” he added.

Dobson said that Biden’s “cultural revolution” that aims at “jerking the nation 180 degrees to the left” is being accomplished through a flurry of executive orders that bypass the legislative process.

While Biden’s “overreach is apparently legal, it is an audacious expression of raw power,” commented Dobson.

“From rejoining the World Health Organization and the Paris Climate Agreement, to halting the border wall, limiting immigration enforcement, requiring non-citizens to be counted within our national census for legislative redistricting purposes, and welcoming transgender individuals into our armed forces, Joseph R. Biden and his liberal colleagues have just begun their efforts to fundamentally transform our sweet land of liberty,” he said.

In his April newsletter, Dobson warned that “Western Civilization appears to be on the verge of collapse.”

“Not since the Civil War has there been such consternation about who we are as a people and where the culture appears to be headed,” he said.

“Thirty years ago, I called this struggle a ‘civil war of values.’ I also said that unless we rose to defend it, the battle for the heart and soul of our nation would be lost.”

“That is exactly what was and is happening,” he said.