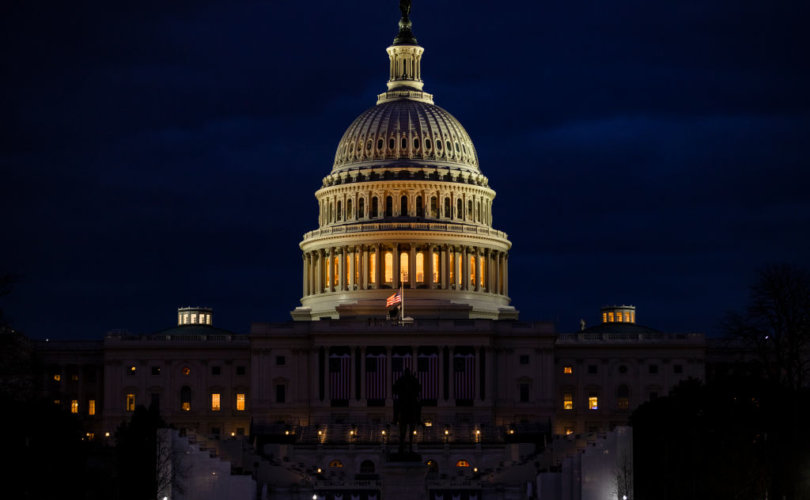 (WND News Center) – A January 6 defendant who faces decades in prison on charges related to the supposed Capitol riot wants to know why the Arizona man he claims tried to recruit him to go inside the Capitol – and is seen in numerous videos doing the same – is not “on the stand to answer the tough questions.”

“Why is Ray Epps not in jail for inciting the crowd or obstruction of Congress or seditious conspiracy?” writes Sean Michael McHugh, a California business owner and father of four, in a letter published by the Gateway Pundit.

“Where is equal application of the law?” McHugh asks. “Who was he there with? What were his motives and who does he work for? Why did he keep repeating that we need to go inside not only a day before January 6 but even after being met with police force outside the Capitol?”

McHugh faces decades in prison on federal charges, including assaulting a law enforcement officer with a deadly weapon, obstruction of justice, and physical violence on Capitol grounds. Officials with the U.S. Attorney’s office released photos they said show McHugh shouting into a bullhorn during the riot. Court documents say he was caught on police body camera spraying officers with an unknown yellow chemical and that he pushed a metal sign into a line of officers while shouting at them.

He has been imprisoned for more than a year in what he describes as “very inhuman conditions” he believes are designed to make him “plead guilty under duress.”

McHugh said he had direct contact, as seen on video, with Epps, who at the very least “appears to be a government cut-out protected by a lawyer who was formally known as an employee of the FBI.”

Epps’ role in the breach of the Capitol has been reported by Revolver News, which has presented evidence that FBI informants and Antifa operatives turned a peaceful January 6 rally into a riot. In a follow-up report in December, the news outlet presented evidence, backed by videos and images, that there were others who worked in tandem with Epps to orchestrate the Capitol break-in.

Epps was featured in a recent New York Times story that lamented he is “a man whose life has been ruined by a January 6 conspiracy theory.”

However, Epps is the one man who has been captured on video urging people to storm the Capitol on the day before the January 6 riot and then directing the breach of the guarded perimeter while Donald Trump was still speaking one mile away.

In a Senate hearing Thursday, FBI Director Christopher Wray admitted that the bureau director of the Detroit field office that oversaw the bungled Gov. Gretchen Whitmer kidnapping case in Michigan – a failed plot in which at least a dozen FBI informants were involved – is now in charge of the Washington, D.C., field office, which is overseeing the January 6 probe.

‘We are going inside’

In his letter, McHugh said that throughout January 6 he had “coincidental contact” with Epps and “people who appeared to be working in concert” with him.

Epps is seen on video January 5 urging Trump supporters to go inside the Capitol. But the government and Chief Judge Howell of the D.C. Circuit have accused McHugh of being the de facto leader of the riot.

On the morning of January 6, 2021, McHugh said he was walking with his mother and a friend down Constitution Avenue toward Ellipse Park when he encountered Epps and associates, who were wearing military colors.

Epps, McHugh said, was yelling, “We are marching over to the Capitol at 1 p.m. whether Trump is done speaking or not, and we are going inside.”

McHugh said Epps put his hand on his shoulder and said: “You have a bullhorn! You have a loud voice to get the word out! You need to tell people the plans. At 1 p.m. we are going inside the Capitol whether Trump is done speaking or not.”

Epps, according to McHugh, continued, “We are leaving from here and we will walk that way to the Capitol and through the front door.”

After Trump’s speech, McHugh saw a crowd heading down Constitution Avenue towards the Capitol Building, which he regarded as the beginning of a peaceful protest.

He noted the video that shows Epps in front of a Capitol Police barricade whispering in Ryan Samsel’s ear, just before Samsel leads the charge to knock down the barricades. The Bristol, Pennsylvania, man has been charged with unlawfully entering the U.S. Capitol building, assaulting an officer, and obstructing or impeding law enforcement.

McHugh continues: “Not once did my mother, my friend, or I pass the police line or continue into the Capitol Building that day. However, I was attacked multiple times with rubber bullets and sprayed repeatedly directly in the face with various chemicals for speaking on my megaphone.”

He said his mother “was also sprayed with multiple different chemicals in her face and shot with rubber bullets and pepper balls in her head for no reason.”

McHugh says his friend “was hit in the head with a concussion grenade and it went off severely injuring him and cracking one of his teeth without warning or any provocation.”

“It was clear they wanted to severely injure people without any announced reason or any apparent provocation,” he continued. “I watched as Capitol Police beat unarmed women with batons. I watched a very petite woman pushed over by Capitol police onto a sharp leg of a barricade that was on its side purposely and unwarranted. They wanted to hurt the vulnerable and elderly. Everyone was asking ‘Why are you doing this?’ They were out for blood!”

Meanwhile, “cool, calm, and collected Ray Epps was still there directing others to ‘remember the plan.’”

“The plan that he and his corrupt cronies had in place on a very specific timeline, seemingly in order to stop the truth from coming out on the House floor as representatives started to contest the election,” McHugh writes.

“Imagine if our representatives had time to present the evidence in a constitutional debate on the House floor in front of millions on national television. I knew something was off. It was an ominous feeling I know shared by many patriots that day.”