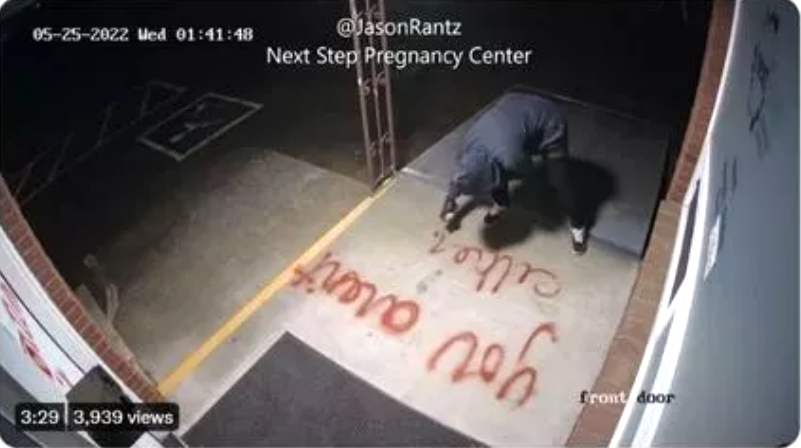 An unidentified woman vandalizes the Next Step Pregnancy Center in Lynnwood, Washington.Facebook

Footage shows a masked and hooded female spray-painting in red, cursive letters on Next Step Pregnancy Center in Lynnwood, Washington at about 2 a.m., “If abortion isn’t safe, you aren’t either,” a kind of slogan of the radical group “Jane’s Revenge,” the name of which was also spray-painted on the center’s back doorstep.

Jane’s Revenge is a reference to the 1970s-era group “Jane’s Collective,” whose members were arrested for illegally providing abortions, but then dismissed of charges after Roe v. Wade.

According to Heather Vasquez, director of the pregnancy center, footage also shows that the perpetrator threw rocks to break five of their front windows.

“The vandalism that took place was unfortunate, but I think we all felt more saddened for the lost individual who did it,” Vasquez told LifeSiteNews on Friday.

The pregnancy center, which provides free services such as ultrasounds, counseling, adoption referrals, and material assistance, continued to operate Wednesday despite the damage. Repairs have already begun, Vasquez told LifeSiteNews, the costs of which are estimated to come to $5,000, according to Vasquez.

“Funnily enough, the vandalism opened the floodgates to even more service and willingness to help,” Vasquez told LifeSiteNews in an email. “We were very busy as it was, and remained open. It only strengthened our convictions that we are doing good work.”

“I believe that we were targeted because a lot of people, including maybe that person, are very misinformed and misguided about what really goes on in a pregnancy resource clinic,” Vasquez told Jason Rantz on his radio show. “I think there’s a lot of misconceptions about what’s really happening here. But none of them ever want to come in and, you know, be with us and see what happens day to day.”

“If they’re really that pro-choice, I don’t understand why they care what we’re doing,” Vasquez said of the vandal. “If a woman chooses to come here and get our assistance, she made a choice. So why can’t she go where she wants to go?”

The incident is the latest in a rash of attacks on churches and pregnancy centers, including the vandalizing of four churches early Sunday morning in Olympia, Washington, openly committed by Jane’s Revenge, in protest against the expected overturning of Roe v. Wade should the leaked U.S. Supreme Court draft majority opinion hold.

One Twitter user commented regarding the Lynwood pregnancy center attack, “Doesn’t it realize that Washington State is about as abortion happy as it gets? Washington state is practically starting its own sport abortion league headed by Coach Inslee … ”

In a Sunday statement in which they admitted to vandalizing four Olympia churches, the group acknowledged that abortion will probably remain legal if Roe v. Wade is overturned, writing, “Even in the likelihood that abortion remains legal in western Washington after roe v. wade is overturned, there are still local enemies who are doing everything in their power to make it as difficult and inaccessible as possible.”

They include among these “enemies” local churches “tied” to crisis pregnancy centers, as well as the centers themselves, which they accused of being “exploitative” and serv[ing] the aims of upholding the patriarchal family, a primary site of violence against women, queers, and children.”

In a comment upon the claim that pregnancy centers are sites “of violence” against these groups, Vasquez told LifeSiteNews, “I’m just flummoxed. I am there every day, all day. There are no restrictions on who we see, serve, care for. Women are our number one clients, and they choose to come to us. If violence means compassion and encouragement and free services they need, then yes — we’re guilty.”

“As far as children … no child enters our clinic and never makes it out alive. Can the folks that hate us say the same about Planned Parenthood? And queers or trans — again, all are welcome. If they come and seek care or help then we care and help to the best of our abilities. We have never turned anyone away,” Vasquez continued.

Jane’s Revenge also threatened local businesses in their Sunday communiqué, having listed the financial backers of Olympia’s “Options Pregnancy Clinic” and declaring, “Each of these businesses should be considered responsible for the violence of forced birth.”

The group has also taken credit for vandalizing and setting fire to the office of a Wisconsin pro-life advocacy group on Mother’s Day, declaring that they will “adopt increasingly extreme tactics to maintain freedom over our own bodies.”

Lynwood police have opened an incident report after the vandalism.