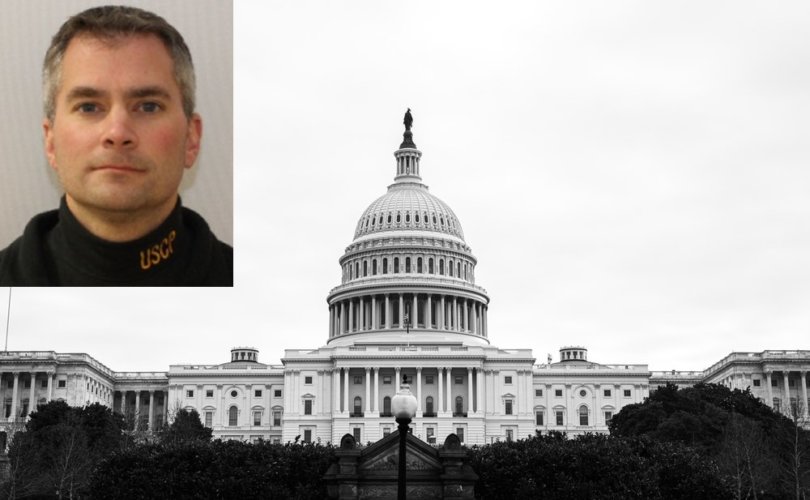 WASHINGTON D.C., April 20, 2021 (LifeSiteNews) – D.C.’s chief medical officer has found that Capitol Police officer Brian Sicknick died of natural causes, after the media and liberal elites for months pre-emptively declared that he died due to injuries sustained in the January 6 Capitol protests.

Due to widely circulated media reports, he was initially believed to have sustained injuries after supposedly being struck in the head with a fire extinguisher, but this was later proven to be false. The official statement at the time, from the United States Capitol Police (USCP), stated that he “was injured while physically engaging with protesters,” then “returned to his division office and collapsed. He was taken to a local hospital where he succumbed to his injuries.”

This was echoed by the Department of Justice (DOJ), who issued a statement on January 8, declaring that Sicknick had “succumbed last night to the injuries he suffered defending the U.S. Capitol.”

Sicknick’s death was quickly used by Democrats and liberal media alike, who hailed him as a martyr for democracy in the face of what the DOJ described as an attack by a “violent mob.” The New York Post commented that “Democratic leaders have presented Sicknick as a martyr of the #Resistance against President Trump and his dangerous supporters.”

Figures such as Democrat Speaker of the House Nancy Pelosi, and Sen. Cory Booker (D–NJ) were among the high profile politicians who used Sicknick’s as yet unexplained death as a tool to attack former President Trump and Trump supporters.

This came even against the wishes of the officer’s own family, who released a statement mentioning that “Many details regarding Wednesday’s events and the direct causes of Brian’s injuries remain unknown and our family asks the public and the press to respect our wishes in not making Brian’s passing a political issue.”

Sicknick was himself an “outspoken Trump supporter,” a fact which was consistently hidden in the media reports concerning his tragic death.

By early February, and despite the FBI conducting “dozens of interviews,” confusion still remained about the moment and means by which Officer Sicknick was injured. The investigators were apparently “struggling” to construct their case, hampered by a “lack of evidence.”

The case, which looked to paint Sicknick as a martyr for the Democrat cause, was not helped by interviews from Sicknick’s own brother, who stated that text messages between them after the January 6 protests, revealed that the officer had been “pepper-sprayed twice,” but was in “good shape.”

Ken Sicknick continued by saying that his brother had “collapsed in the Capitol and they resuscitated him using CPR.” It was only on the next day that the family was informed he had a blood clot and suffered from a stroke, resulting in him being put on a ventilator for life support.

Back in February, LifeSiteNews contacted the FBI, the USCP, and the Department of Justice, seeking details about the autopsy, and information about the true cause of Officer Sicknick’s death, as well as suggestions that he suffered from a pre-existing medical condition.

Reports had emerged as early as January 8 that Officer Sicknick’s death had in fact been “driven by a medical condition.”

Now, over three months since his death and the subsequent hue and cry which has been levied at Trump and his supporters, the official report from the district’s chief medical officer has stated that Officer Sicknick actually died of “natural causes.”

The Washington Post interviewed the medical examiner, Francisco J. Diaz, who also ruled out any possibility of the pepper spray having a direct link to Sicknick’s death. Diaz noted that the autopsy produced “no evidence the 42-year-old officer suffered an allergic reaction to chemical irritants,” and further, that there was “no evidence of internal or external injuries.”

Diaz confirmed the previous statements of Ken Sicknick, saying that a blood clot in the artery at the base of the brain stem had caused the two strokes.

According to the statement, Sicknick collapsed 7 hours and 40 minutes after he was sprayed, and his death came nearly 24 hours after the event.

However, the medical examiner would not comment on whether Officer Sicknick had any pre-existing medical conditions, citing privacy laws.

The USCP issued a statement in response to the ruling, saying that the force “accepts the findings,” but that it “does not change the fact Officer Sicknick died in the line of duty, courageously defending Congress and the Capitol.”

In March, two men were arrested and accused of attacking Sicknick with chemical spray during the January 6 protests. The autopsy report had not been completed at the time of their arrest, and the recent ruling could make any attempted charge of homicide much harder to argue.

Yet despite attributing Sicknick’s death to “natural causes,” Diaz added that the events of January 6 “played a role in his condition.”

While the media have been focussed on the death of Officer Sicknick, they have largely overlooked the death of Ashli Babbit, who was also killed on January 6 – the only person to have actually been directly killed that day.

Babbit, 35, was one of those who entered the Capitol building and was subsequently fatally shot by a USCP officer whilst inside the building. She was an Air Force veteran of 14 years who completed four tours of duty during her service.

A recent announcement from the Department of Justice stated that the officer in question, who killed her with a single shot, would not face charges, since he was acting in “self-defense.”

The D.C. Office of the Chief Medical Examiner had already ruled that Babbit’s death was homicide, yet the un-identified officer who shot Babbit will now avoid any prosecution, as the DOJ has “closed the investigation into this matter.”