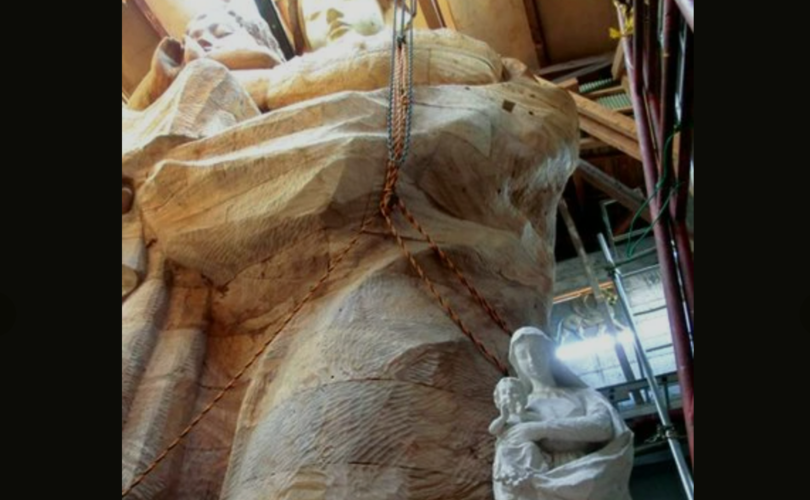 NAGASAKI, Japan (LifeSiteNews) — Japanese Catholic Eiji Oyamatsu plans to unveil his 10-meter wooden statue of the Blessed Virgin and baby Jesus after building it for 40 years.

According to the Japanese newspaper Asahi Shimbun, the 80-year-old sculptor built the statue to honor the thousands of 17th century Christian martyrs of Nagasaki. The display is due to open to the public in March 2023.

Oyamatsu began work on the statue in 1981 after Pope John Paul II’s visit to Nagasaki. The sculptor sent a small Marian statue to the pope and expressed his desire to build a larger statue. Pope John Paull II responded, blessing the initiative and promising prayers for his work.

Despite offers of help from residents of Minami-Shimabara, he insisted on completing the project alone, saying, “I want to see how far I can go with my abilities. A climber wouldn’t have much fun if he were to take a helicopter to the summit, right?”

The project is supported by the Citizens’ Association for Minami-Shimabara World Heritage, which bought land to install the statue. Earlier this year, land development and construction of a tower on a hillock began as the association obtained funding of 30 million yen (US $22,200).

“We were deeply moved by the earnest feelings of the artist,” an official with the association’s secretariat said. “And the more you look, the more you realize it’s a wonderful work. We want to host the statue here in Minami-Shimabara at any price.”

In addition to honoring the Blessed Virgin, the state will commemorate the martyrs of the Shimabara-Amakusa Rebellion. The 17th century rebellion resulted in the deaths of approximately 37,000 Christians and an end to Christianity in Japan until the 19th century.

“It seems fateful that I set about this work without being commissioned by anybody, and the statue will now be hosted in a place that deserves it the most,” the sculptor said.

Oyamatsu named the statue St. Mary Kannon of Hara Castle to honor both the Blessed Virgin and the martyrs of the Shimabara-Amakusa Rebellion.

The name refers to Maria Kannon, an image of the Blessed Virgin disguised as a Buddhist deity that Catholics venerated when Christianity was outlawed. Hara Castle, a World Heritage site, is a castle in which Catholic peasants took refuge before being slaughtered by invading forces.

Christianity has faced persecution since it was brought to Japan in 1549 by St. Francis Xavier. Beginning in 1587, Christianity was outlawed throughout Japan. However, Christianity continued underground until the 19th century when it was again legalized.