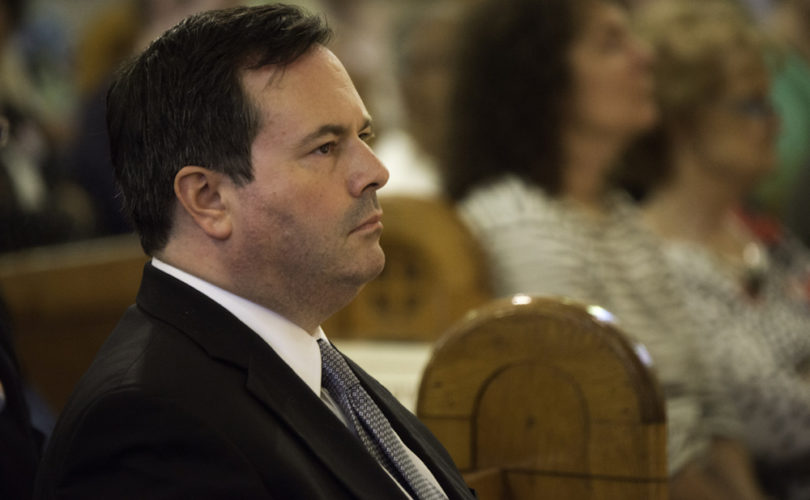 CALGARY, Alberta, July 8, 2016 (LifeSiteNews) — Jason Kenney has defended his pro-life stance after an Alberta NDP MLA called him out on his convictions following Kenney’s Wednesday announcement he was running for the Alberta PC leadership.

Marie Renaud, MLA for St. Albert, lost no time bringing up abortion, tweeting that night: “Just one question for Mr. Kenney, Pro-choice or not?”

Added Renaud: “I had an abortion and I thank God I was able to. Who wants to change that?”

Kenney, well known for his social conservative views, stood by his pro-life convictions in an interview with the CBC Thursday. But he also made it clear he is focusing on economic issues in his bid for leadership of the PC Party, which he hopes to merge with the Wildrose Party, and he implied Renaud’s remarks would be the first of ongoing attempts by the NDP “to distract people with hot-button social issues.”

“My position is consistent since I first ran for Parliament in 1997,” the high-profile Calgary MP, who had long been considered one of the top hopefuls to succeed former Prime Minister Stephen Harper as Conservative leader, told the CBC.

“I believe in the value of human life and I apply it to capital punishment and all bioethical questions, but in my 20 years in Parliament I haven’t given a speech about this, let alone proposed a motion or a bill.”

Kenney told the CBC that as federal MP, he supported the Harper Conservatives’ policy not to introduce legislation regulating abortion.

If elected leader of the PC Party, added Kenney, he would “allow for freedom of conscience for [MLAs] to represent their constituents on ethical issues, and to do so when those matters come up as votes, but as a government we wouldn’t be taking initiatives on those issues.”

“We’re pleased Kenney didn’t run away from his pro-life convictions and rather, reiterated his belief that all human life has value. Good on Jason. That’s more than past leaders of the Alberta PC and Wildrose Parties have ever said, so it’s a hopeful sign, ” noted Jeff Gunnarson, vice president of Campaign Life Coalition. He added that Renaud’s remarks show “the foremost preoccupation on the mind of the NDP is to protect the abortion industry.”

“At the same time, I’m disappointed Jason said a Tory government won’t take initiatives on pro-life issues, as that overlooks the government’s responsibility to take a stand on issues that affect the welfare of its citizens,” Gunnarson told LifeSiteNews. “That said, abortion legislation is a federal responsibility.”

In his 19 years in Ottawa, Kenney consistently voted pro-life and pro-family, and as immigration minister, he ignored Harper’s expressed wishes and voted for Stephen Woodworth’s failed motion to strike a committee to study when life begins, noted Gunnarson.

He lauded Kenney’s commitment to allow free votes on “ethical issues, including the dignity of human life. So if a bill or motion arises from either side of the aisle under his watch, he won’t try to whip the vote, as Harper did with Motion 312 (studying when life begins) and Motion 404 (gender selection abortions).”

Gunnarson said he was glad that Kenney blasted the NDP’s education agenda, which signals Kenney will defend parental rights.

At his Wednesday press conference, Kenney decried the “ideological agenda” of the leftist NDP, which, he pointed out, is “planning ‘radical changes to the school curriculum’.”

Added Kenney: “You know what that means for these ideologues. It doesn’t mean better measurable school outcomes. It means social engineering and pedagogical fads in our schools.”

Following its stunning landslide victory last May, in which it took 53 seats to the Wildrose’s 21 and PC’s 10, the NDP under Rachel Notley has already lost much of its electoral support by undermining the province’s energy sector at the very moment oil prices plummeted, by deficit budgeting, and by advancing radical social policies — which include pushing a pro-homosexual agenda in provincial schools.

But Kenney’s main thrust was to present himself as a fiscal conservative who would merge the PCs with the rival Wildrose Party into “a single free enterprise party” and “put the province back on the right track.”

Wildrose was formed in 2008 by rural and small town conservatives who feared the PC Party, which had governed Alberta steadily since 1971, had become corrupt, profligate and liberal on social issues. Wildrose nearly won the 2012 election but fell to second place on voting day. In last year’s contest it came second again, splitting its vote with the Tories to the point that the socialist New Democratic Party formed the government of Alberta for the first time.

A recent poll showed Wildrose with 35 percent of the popular support, the NDP government with 27 percent and the PCs with 22 percent. Only 22 percent believed the government was doing a good job, while Wildrose leader Brian Jean was rated as doing the best job of all the leaders.

Jean, who served as a backbench Conservative MP when Kenney was Harper’s right-hand man and a cabinet minister, has been non-committal towards the various organized efforts to reunite the right wing, stating recently that Wildrose “stands firm in its conservative identity” and will continue its effort to expand its membership.

Wildrose’s base is not inclined to compromise, one conservative insider told LifeSiteNews, after attending conventions of both PCs and Wildrose. “They are old, white men, 10 to 15 years older than PC conventioneers,” reflecting the largely Northern European stock who homesteaded the province a century ago.

Many Wildrosers, he said, are still bitter at the Tories for luring Wildrose’s former leader Danielle Smith and half the party’s MLAs across the floor to join the PCs in their doomed bid for re-election. But Smith said she had been forced out of Wildrose for attempting to moderate its social policies and make it more tolerant of homosexuals.

Wildrose Leader Jean himself has problems with his conservative base. When he ejected MLA Derek Fildebrandt from caucus for making reference to Ontario Liberal Premier Kathleen Wynne’s homosexuality, the party membership forced him to reinstate Fildebrandt—right away.

Jean is staying out of the Tory fight, saying, “Over the next year, the PC party will be involved in a divisive battle as they debate their stated pledge at their recent AGM to go it alone. It would be wrong to speculate further on the leadership race for the third party until this is resolved.”

Kenney knows something about uniting parties. He helped Harper merge the Alberta-born Canadian Reform Alliance with the national Progressive Conservatives, creating the Conservative Party of Canada in 2004. It went on to govern Canada from 2006 to 2015.

But first Kenney must win the Tory leadership contest. According to University of Calgary political science professor Thomas Flanagan, a long time Conservative adviser at the federal level, Kenney must establish grassroots organizations in each of 88 ridings in order elect supportive delegates to the leadership convention. Flanagan warned in one news interview that the provincial party leadership might resort to dirty tricks to reduce Kenney’s influence. “It’s a big organizing job with lots that could go wrong.”

Danielle Smith, now a radio host, thinks Kenney, an adult convert to Catholicism, may be too socially conservative to lead Alberta, given the increasingly progressive electorates in Calgary and Edmonton, and given Kenney’s public stands against abortion and same-sex “marriage.”

But Alberta’s small town voters still send a disproportionate share of MLAs to the legislature and they are worked up about the NDP’s clear intention to force a pro-homosexual agenda into provincial public schools, many of which are explicitly Catholic or Evangelical Christian under Alberta’s exceedingly pluralistic education system. Lately the NDP has announced a plan to rewrite the entire curriculum.

“You know what it will be,” said the conservative insider. “All political correctness, anti-capitalist, all about global warming. If I were Jason Kenney, I’d unite the right by focussing on the schools.”