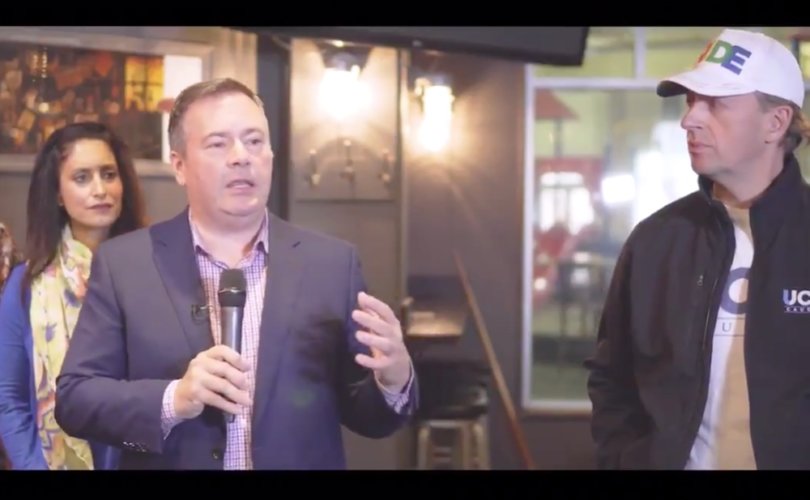 “Today in Calgary Pride we celebrate diversity for all Albertans, including gay and lesbian Albertans, and people who identify in different ways in terms of their sexuality,” Kenney said at the UCP Pride breakfast at Garage Sports Bar in Eau Claire Market.

“We want them to know that if there is a United Conservative government in Alberta, all of them will be treated with nothing but respect and dignity,” said the leader of Alberta’s official opposition.

“We're free to love as we choose to love, we are free to live our own lives, and I think, at it’s best, that’s what Pride seeks to celebrate,” added Kenney, who was once regarded as a social conservative on account of his impeccable voting record during his 19 years as a federal Member of Parliament.

“And this is why in the founding agreement of the United Conservative Party, it says that this is a party that believes in the inalienable dignity of the human person, and that ours is a broad coalition of Albertans reflecting the diversity of today’s celebration,” he said.

Thanks to everyone that came out to celebrate #yycpride with us this morning. Happy Pride, Calgary! pic.twitter.com/Y4s6OHpdHv

The September 2 Pride Parade celebrated, as all such events do, an interpretation of human sexuality that runs contrary to Judeo-Christian morality and contradicts God’s plan for human flourishing as revealed in the Bible.

National pro-life political lobbying group Campaign Life Coalition (CLC) had green-lighted Kenney as a supportable candidate, but blasted his statements at the UCP Pride breakfast as “implicitly shedding his one-time support, as a faithful Catholic, for the traditional definition of marriage between one man and one woman to the exclusion of all others.”

CLC warned Alberta’s social conservatives to be concerned about Kenney’s “rapid slide to the left and abandonment of former principles.”

This is the second year in a row Calgary Pride organizers refused to let UCP, which formed last July when the Progressive Conservatives and Wildrose Party merged, march in their parade.

Kingsley did not elaborate on that, but in a 2017 statement said Calgary Pride organizers were looking to the UCP to “demonstrate their commitment to the gender and sexually diverse community through their new platform and policies over the next year onward.”

Homosexual activist Kris Wells, who runs the Institute for Sexual Minorities Studies and Services at the University of Alberta’s faculty of education, told the Herald the UCP hasn’t “earned that privilege” of marching in the Pride parade, which in its Toronto version, traditionally features lewd behaviour, simulated sex acts and nudity.

“Jason Kenney has gotten off on the wrong foot and in fact, he’s probably put his foot in his mouth. It’s going to take a lot of work to regain and rebuild that trust,” Wells said.

Edmonton Pride organizers also rejected the UCP’s application to march in its Pride Parade in June, and the UCP held a similar event which Kenney attended.

He spoke there of his life-changing experience volunteering as a college student in San Francisco in an AIDS hospice run by St. Mother Teresa’s Missionaries of Charity in 1985, and of starting a program as federal immigration minister dedicated to bringing homosexual refugees to Canada from countries where they faced persecution, including the possibility of execution.

He also spoke of the UCP’s need to “reach out as a party to LGBTory,” the group that lobbies to promote the homosexual agenda in Conservative parties.

“Actually, LGBTory started in my office… as minister of immigration, with Jamie Ellerton, my executive assistant, who organized the first … Fabulous Blue Tent reception at a national Conservative convention, in his spare time, after hours in my office, just to be clear,” Kenney said.

Kenney’s UCP did not oppose the NDP’s bubble zone law banning pro-life witness outside abortion centers, and he has been clear a UCP government would not bring in any legislation regarding abortion.

Premier Rachel Notley’s NDP has portrayed the UCP as anti-LGBTQ since the party opposed Bill 24, which came into effect last December and which made it illegal for teachers to tell parents when their child joins a gay-straight alliance (GSA) without the child’s consent.

Kenney blasted the law as government overreach and a “desperate” political move by the NDP to distract from its dismal economic record.

He maintained it should be left to teachers to decide on a case-by-case basis if parents be told their child had joined a GSA, and not to “a blunt instrument of the law.”

When 57 percent of UCP delegates at the party’s founding policy convention in May 2018 approved a resolution that parents be told when their child is involved in sexual and religious subjects, including after-school clubs such as GSAs, Kenney said he would not include the policy in the party platform.

He reiterated he’d like to see teachers notifying parents when they deem a child would be at risk by joining a Gay Straight Allience.

Jason Kenney turns back on grassroots over parental rights