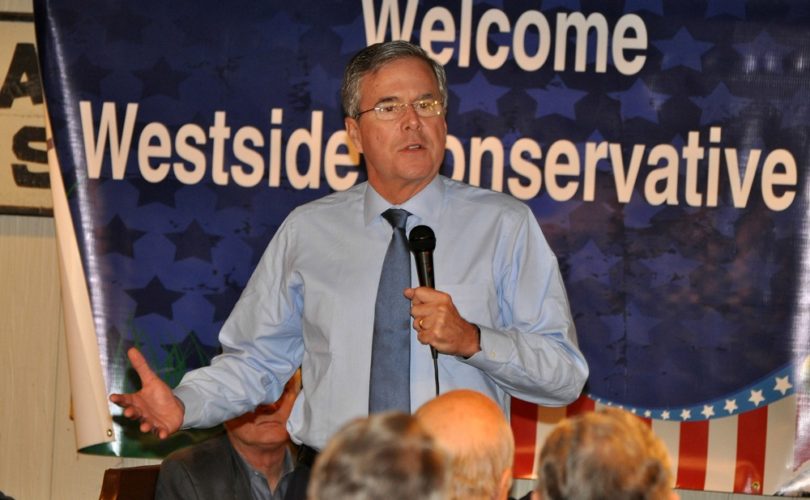 URBANDALE, Iowa, January 15, 2016 (LifeSiteNews) – Despite doubts cast on the conservative credibility of his campaign by a previous pro-abortion association and apparent resignation to homosexual “marriage,” GOP presidential hopeful Jeb Bush told an Iowa crowd of grassroots conservatives he is strong on life and religious freedom.

The former governor of Florida said he has been consistently pro-life and that Planned Parenthood should be defunded, and while he doesn't back fighting last June's Supreme Court decision redefining marriage, he said he supports federal protection for religious freedom.

Appearing before the Westside Conservative Club Wednesday in the Des Moines suburb of Urbandale, Bush was asked, given the fact he has said the Obergefell decision is the law of the land, what he would do about the consequences for people who support marriage, such as small business owners who decline to participate in homosexual “weddings” and lose their business.

Aside from his Obergefell comments, Bush has made other statements and campaign decisions that have drawn his marriage stance into question.

He said in a New York Times interview last January after a court decision allowing the unions to proceed in Florida that “regardless of our disagreements, we have to respect the rule of law.” And he amassed a group of key staffers early in his campaign who were supporters of homosexual “marriage.”

In his Iowa response, Bush focused on religious freedom as opposed to the subject of marriage itself.

“As it relates to marriage, the Supreme Court has ruled,” Bush told the full house of local conservatives and elected officials. “What they haven't ruled on and what we need to protect is religious freedom and religious conscience.”

Bush went on to give the example of a baker who refuses to be part of the preparation of a same-sex “wedding,” saying there are protections in the Bill of Rights and First Amendment for religious conscience.

“It's the first freedom of our country,” stated Bush. “And anything legislatively that's necessary to validate that basic fundamental right needs to be applied. And I'm supportive of the efforts in Washington D.C. that provide protection for religious conscience.”

The GOP presidential hopeful said that “believing” is not something that you do only behind church walls and chided Hillary Clinton for her comments to the effect that “people of faith have to get over it” – i.e., that they can't engage their faith in the public square.

“Well, no, that's the whole point,” Bush said. “Religious conscience is acting on your faith. It's engaging with people.

“It's showing consciousness about the suffering around you, to feed the homeless, to help the disabled, to do the things that people are compelled to do because of their faith,” he continued. “That is something that is uniquely special in our country, and it needs to be protected across the board.”

Religious conscience should be protected at the federal level, he stated, “to eliminate these discriminatory acts that take place all across the country.”

Bush was also questioned about abortion and stopping Planned Parenthood.

“Actually, I have a record. Past is prologue,” he replied. “You can find the consistency I have used as it relates to life, from beginning to end.”

Bush went on to say it is from the beginning of life to its end that should receive focus, not just the beginning.

He said that as governor, he applied his “deeply held belief that this is a gift from God, that life itself is important,” and that he has been the most pro-life governor of Florida.

“I defunded Planned Parenthood,” Bush stated. “We eliminated partial-birth abortion. We tried to get parental consent. It was ruled unconstitutional by a state court, so we put in the constitution parental notification.”

He also cited Florida's record as the only state that funds crisis pregnancy centers directly with state money.

“My record is consistently pro-life,” said Bush. “And if you recall the Terri Schiavo matter, I got to act on it as it related to an end of life issue as well. We should err on the side of life.”

Up until just before declaring his candidacy in late 2014, Bush was director of the Bloomberg Family Foundation, which was established by former New York mayor Michael Bloomberg and has given tens of millions of dollars to Planned Parenthood.

“I didn't know, but it doesn't matter,” Bush had replied when asked about the Bloomberg foundation's Planned Parenthood connection in a presidential debate last fall. His posture toward the abortion giant was tougher and pointed when asked about it in Iowa this week.

“Planned Parenthood is the place where more than a third of all abortions take place in this country,” Bush said, before conceding the pro-abort position some have put before him that Planned Parenthood provides other services. He also said there are many other organizations providing these services who don't provide abortion services.

“I think it [Planned Parenthood] should be defunded in Washington D.C., and we should provide support for women in many other ways that are just as beneficial,” he stated, concluding, “We don't have to play defense on this. We can play offense.”

Bush was polling in sixth place at 4% in a recent Des Moines Register/Bloomberg Politics Iowa poll, just behind Kentucky Senator Rand Paul at 5%. Texas Senator Ted Cruz led the poll at 25%, followed closely by businessman Donald Trump at 22%, with Florida Senator Marco Rubio in third place at 12% and Dr. Ben Carson in fourth with 11%.