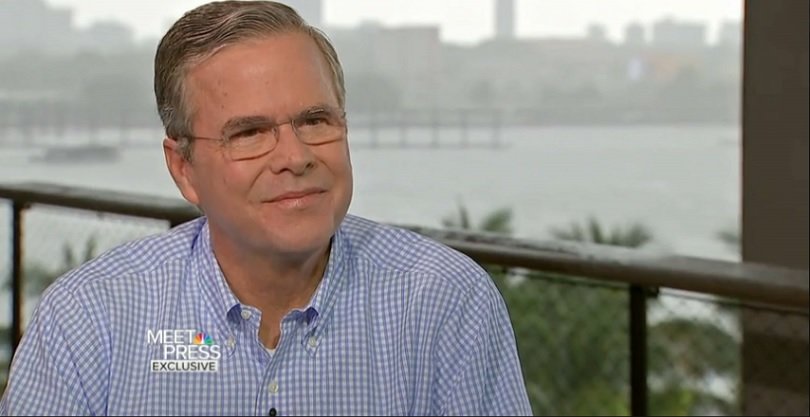 WASHINGTON, D.C., November 3, 2015 (LifeSiteNews) – Jeb Bush this weekend stood by a Clinton-era statement that Republicans should not make it a “litmus test” for presidential appointees – including Supreme Court justices – to hold pro-life views.

The former Florida governor also reaffirmed that, “of course,” he supports exceptions to allow abortion in the case of rape and incest, and he side-stepped a question about whether he supports a Human Life Amendment to the U.S. Constitution.

“So, you're not going to ask a potential Supreme Court justice if they would overturn Roe v. Wade?” Todd asked on the NBC program.

Instead, he promised to ask those on his short list “deep questions about judicial philosophy.”

“The lessons of the last few years,” he said, show that judicial nominees “ought to have a clear, consistent record, so that you have a higher assurance they're not going to wander off,” he said. That remark was an apparent slap at Chief Justice John Roberts, who was appointed by George W. Bush, but voted to uphold ObamaCare's individual mandate and the Obama administration's decision to dole out taxpayer subsidies in a way that violates the wording of the Affordable Care Act.

He may have also had former Justice David Souter, a “stealth nominee” appointed by his father in 1990, who upheld Roe in the Supreme Court's 1992 Planned Parenthood v. Casey decision.

A Human Life Amendment to 'Overturn the Constitution”?

Bush did not directly answer Todd's question about whether he still believed it was “inappropriate” to amend the U.S. Constitution to recognize the right to life.

He had previously said that the nation's gridlock over abortion cannot be solved, because America is too divided. During his second race for governor of Florida in 1998, Jeb said that he believed that “life begins at conception.”

However, “I do not believe that the question of abortion will be solved until there is a broad consensus on the subject,” he said, “and until that time it is inappropriate to be advocating constitutional amendments.”

“I will not be leading the charge to overturn the Constitution on this issue,” Jeb said during the debate on October 20, 1998.

On Sunday, Jeb did not directly answer whether he would now support a Human Life Amendment to the Constitution – something that has been part of the Republican Party platform from 1980 through 2012 – but encouraged voters to elect pro-life politicians like himself.

“I think that what we ought to do is elect conservatives, like myself and others, that believe that life is a gift from God and life is precious,” he said.

Bush also remained steadfast in which instances he would allow an abortion to take place.

“My views haven’t changed,” Bush told Chuck Todd. “I believe in the exceptions of rape and incest and the life of the mother, of course.”

The interview will generate little pro-life support for Jeb's flailing campaign, which is reeling after Bush got the worse part of an exchange with former protege Marco Rubio at last week's CNBC debate. When the campaign tried to revamp itself on Monday by debuting a new slogan – “Jeb Can Fix It” – Twitter denizens provided a devastating response.

In addition to slipping poll numbers – one Democratic firm had him tied with Bobby Jindal in New Hampshire – Jeb suffers skepticism over his family's legacy and Jeb's long absence from the public square.

After leaving office, Jeb Bush sat on the board of Bloomberg Philanthropies, which launched a worldwide campaign to loosen abortion restrictions in pro-life countries, in partnership with Planned Parenthood Global.