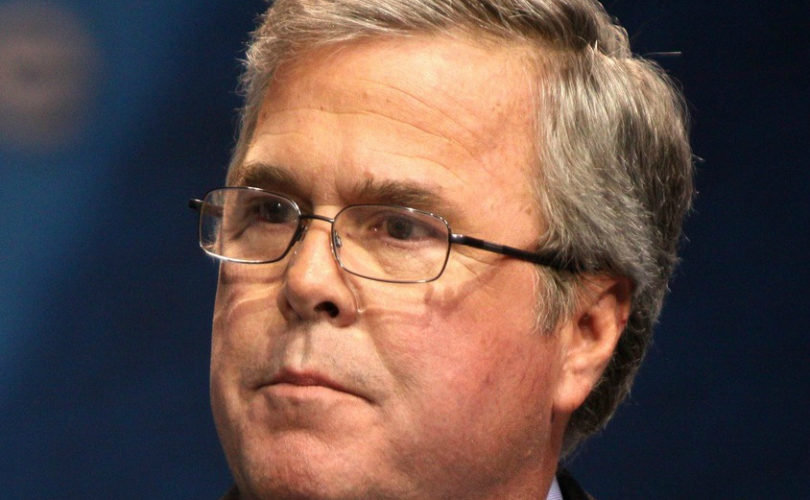 WASHINGTON, D.C., February 15, 2016 (LifeSiteNews) – In the aftermath of Justice Antonin Scalia's death, pro-life organizations and strict constructionists have said blocking Barack Obama's nominee must be the Senate's top priority. But Jeb Bush says whether the Senate votes or not is “really not important to me.”

“I think President Obama is going to submit a nominee, and in all likelihood this person will be out of the mainstream,” Jeb Bush said on CNN yesterday. “That’s his prerogative. He has every right to do it, and the Senate has every right not to confirm that person.”

Dana Bash asked if the former Florida governor agrees with Senator Ted Cruz, Donald Trump, and Dr. Ben Carson that the Senate should not confirm any of Obama's appointees to the high court – perhaps not vote on them – and Bush said that while he expects the Senate to reject Obama's pick, he did not care whether the Senate chooses to vote or not.

“It’s up to Mitch McConnell. That’s really not important to me,” Bush told Bash.

That echoed his statement at Saturday night's Republican debate in Greenville, South Carolina, where he said Barack Obama “has every right to nominate Supreme Court justices.”

“I'm an Article II guy in the Constitution,” he said, referring to the part of the U.S. Constitution dealing with the powers of the presidency. “We want a strong executive, for sure. But in return for that, there should be a consensus orientation on that nomination.”

He added that “there's no doubt in my mind that Barack Obama will not have a consensus pick.”

Pro-life groups are asking that the Senate not allow President Obama to place a third justice on the Supreme Court, alongside Sonia Sotomayor and Elena Kagan.

“Two years ago, the GOP promised the American people that, if elected, they would thwart Obama's radical leftist agenda. This is the GOP's moment,” said Operation Rescue President Troy Newman. “Will it shine as a light for liberty in this dark moment, or will that light be extinguished by political appeasement?”

Jeb Bush: I think President Obama is going to submit a nominee, and in all likelihood this person will be out of the mainstream, and he’ll be rejected by the Senate. That’s his prerogative. He has every right to do it, and the Senate has every right not to confirm that person. That’s what I said. He clearly has the power to do it, but given his choice of Supreme Court justices in the past, the Senate of the United States should not confirm someone who's out of the mainstream.

Dana Bash: But if I could just clarify, right now it sounds as though…

Bash: …the Republicans who run the Senate aren’t even going to schedule a vote. You think that one should be scheduled?

Bush: It’s up to Mitch McConnell. That’s really not important to me.