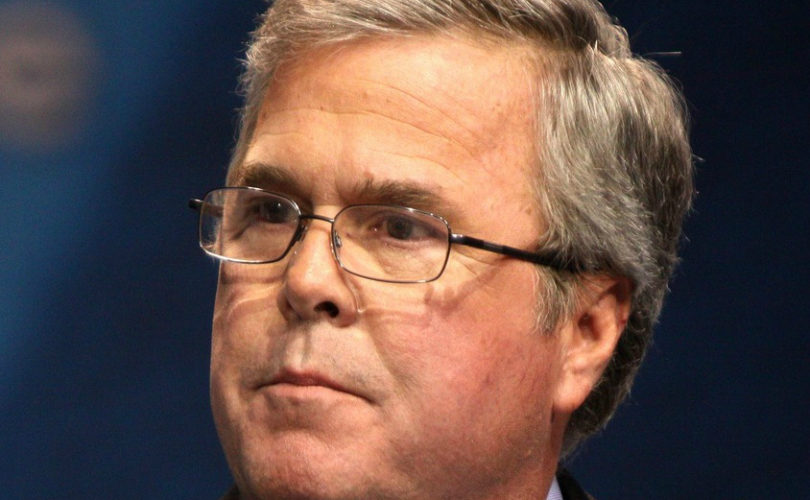 Less than a month after announcing a possible bid for U.S. president, Jeb Bush is taking criticism from social conservatives after he called for “respect” of gay “marriages” in response to a court decision allowing the unions to proceed in Florida.

Earlier this week, the probable Republican presidential candidate told The New York Times, “We live in a democracy, and regardless of our disagreements, we have to respect the rule of law.”

“I hope that we can show respect for the good people on all sides of the gay and lesbian marriage issue – including couples making lifetime commitments to each other who are seeking greater legal protections and those of us who believe marriage is a sacrament and want to safeguard religious liberty.”

The Times notes that those comments came a day after Bush told The Miami Herald that marriage “ought to be…a state decision.”

Bush's comments drew harsh criticism from Family Research Council president Tony Perkins, who wrote on Facebook, “If we are going to allow the courts to decide what our nation's public policies are going to be on 'controversial' issues why do we need a president? What good is a Congress? Heck we can save a lot of money and send them all home!”

Perkins asked whether Bush “hold[s] the same view of the Court's 1973 decision declaring a constitutional right to abort an unborn child?”

Bush's position on marriage straddles a difficult line for the possible presidential candidate, who had a socially conservative record as Florida governor but is trying to soften both his image and that of the GOP. During his first, and failed, gubernatorial campaign in 1994, he wrote that “[h]omosexuality is wrong, but it is also wrong to discriminate against homosexuals in employment, housing, etc., solely on the basis of sexual preference.”

However, wrote Bush, government should not enforce non-discrimination. “Or, to put it another way, should sodomy be elevated to the same constitutional status as race and religion? My answer is No. We have enough special categories, enough victims, without creating even more.”

A spokesperson for Bush told Buzzfeed this week, “This opinion editorial from 20 years ago does not reflect Gov. Bush’s views now, nor would he use this terminology today.”

“Gov. Bush believes that our society should have a culture of respect for all people, regardless of their differences, and that begins with preventing discrimination, including when it comes to sexual orientation,” the spokesperson added.

Terri Schiavo’s husband: Jeb Bush would give us a gvmt ‘that’s gonna intrude on your life’