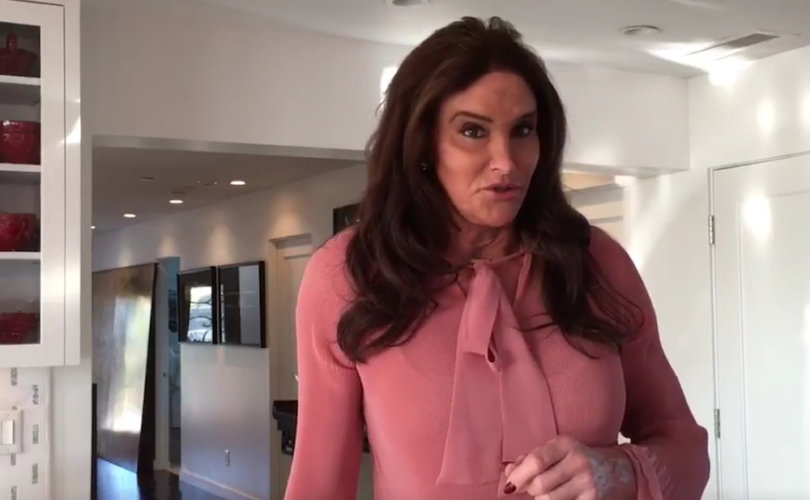 In the video, Jenner, clad in what CNN reported was a “pink ‘pussy bow’ blouse,” takes a vicious shot at Attorney General Jeff Sessions, implicitly calling him a “bully” who is “picking” on vulnerable transgender people, including children, ostensibly due to his own LGBT-related insecurities.

Jenner sent out a video on his Twitter and Instagram accounts. Talking directly to the camera, he says: “I have a message for President Trump from, well, one Republican to another. This is a disaster. And you can still fix it. You made a promise to protect the LGBTQ community”

Holding up a mock phone to his head, Jenner says to Trump, “Call me.” He and Trump have gone back and forth on the “transgender” issue, with Trump even welcoming Jenner to use the female restroom at Trump Tower in New York. As Cosmopolitan reported in April, “Caitlyn Jenner Peed in One of Trump’s Bathrooms and Filmed it.”

In his new video, Jenner also gives a pep talk to “transgender” youth in the wake of Trump’s action, which was lauded by pro-family advocates (yet resisted by Trump’s own Education Secretary). Jenner cites the Supreme Court’s hearing of a case next month involving a gender-confused, “female-to-male” transgender Virginia high school student now calling herself Gavin Grimm.

However, legal experts say the prospects of the Grimm case are dimmed because it relied upon Obama’s radical and expansive interpretation of “sex discrimination” under Title IX in the civil rights code. That interpretation was flatly rejected by Sessions. A federal judge blocked Obama’s mandate after it was challenged by almost half of the United States.

According to an ABC News legal analyst, the case changes without the Obama directive. The Supreme Court could decide that it will not even hear the Grimm case and instead send it back to the lower courts.

Jenner said in the video: “I have a message for the trans kids of America. You're winning. I know it doesn't feel like it today or every day, but you're winning. Very soon we will win full freedom nationwide and it's going to be with bipartisan support. You can help by checking out the National Center for Transgender Equality and letting Washington hear you loud and clear.

Implying that Sessions is a bully who picks on vulnerable people purportedly because he is insecure about his own homosexual or transgender issues, Jenner said:

“Now I have a message for the bullies: You're sick. And because you're weak, you pick on kids, you pick on women or anyone else you think is vulnerable. Apparently even becoming the attorney general isn't enough to cure some people of their insecurities.”