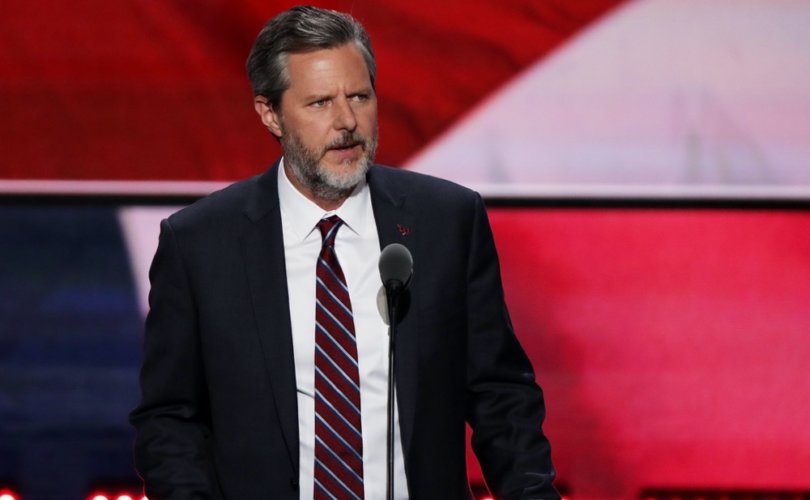 LYNCHBURG, Virginia, August 26, 2020 (LifeSiteNews) — Jerry Falwell, Jr. resigned as president and chancellor of Liberty University late Monday amid allegations of his and his wife’s involvement in an extramarital affair.

The Christian school issued a statement Tuesday that the board had accepted the resignation, ending confusion caused by Falwell on Monday after he first agreed to resign then changed his mind, several sources reported.

Falwell’s departure comes after a former business associate, 29-year-old Giancarlo Granda, alleged in a Reuters interview Monday that he had an eight-year affair with Falwell’s wife, Becki. He said it began shortly after he met the couple in March 2012 while working as a white-uniformed attendant at one of the 11 pools of the luxurious and celebrity-stacked Fontainebleau Miami Beach hotel.

Granda also alleged that Falwell would observe him and his wife as they engaged in sexual relations “multiple times per year” in hotels in Miami and New York and at the Falwells’ Virginia home. He “showed Reuters emails, text messages and other evidence that he says demonstrate the sexual nature of his relationship with the couple,” the news agency reported.

For his part, Falwell admitted in a preemptive statement published exclusively in the Washington Examiner on Sunday that he knew about his wife’s affair but that it was short-lived, he was not involved, and he and his wife have forgiven each other.

Falwell, 58, alleged that Granda became aggressive and tried to blackmail him and his wife, who have been married for 33 years and have three adult children, after they tried to distance themselves from him.

“Even years after the improper relationship had ended, this person continued to be aggressive with Becki and me in a variety of ways. We finally decided that we had to further withdraw completely from him, which resulted in him stepping up his threats to share more outrageous and fabricated claims about us,” Falwell said.

“Eventually, he began threatening to publicly reveal this secret relationship with Becki and to deliberately embarrass my wife, family, and Liberty University unless we agreed to pay him substantial monies,” he added.

Granda countered in an email to the Washington Examiner that “any allegation of extortion is falsely defamatory and belied by clear documentary evidence” and “reeks [of] desperation,” and that “the WHOLE truth will come out.”

A lawyer and real estate developer, Falwell took over as president of Liberty University after his famous conservative Christian father, who founded both the school and the Moral Majority movement, died in 2007.

The school’s honor code states that “sexual relations outside of a biblically ordained marriage between a natural-born man and a natural-born woman are not permissible at Liberty University.”

The university’s statement credits Falwell Jr. with transforming the campus into a world-class institution and overseeing “more than $1 billion of ongoing or planned construction” as well as increasing enrollment in residential and online programs to over 100,000 students.

Falwell is also “broadly credited for bringing Liberty out of deep debt to its current financial strength, including a $1.59 billion endowment as of 2019,” reported Virginia Business.

Nevertheless, the university board put Falwell on indefinite paid leave August 7 after he posted a photo on Instagram of himself on a yacht with his midriff bare and pants unzipped, holding a cup of dark liquid and with his arm around his wife’s pregnant assistant, who also had her shorts half-unzipped.

He subsequently explained in a radio interview, “She couldn’t get her pants zipped and I was like, trying to like — I had on a pair of jeans that I hadn’t worn in a long time. So I couldn’t get my zipper up either and so I just put my belly out like hers.”

Falwell said “it was all in good fun” and that he “apologized to everybody and I promised my kids I'm going to try to be a good boy from here on out.”

Politico reported last week that the yacht belongs to NASCAR mogul Rick Hendrick, who owns a racing team that Liberty University sponsors each year to the tune of about $6 million.

Falwell was also denounced in June for tweeting what the New York Times described as “the image of a mask on which was emblazoned the photo from Mr. Northam’s medical school yearbook of a man in black face and another in Ku Klux Klan robes.”

Falwell said this was intended to remind people of the pro-abortion governor’s “racist past,” but the incident led to some black employees and students to leave Liberty, CNN reported.

Falwell also came under fire in March for inviting students back to campus after spring break “when most other colleges and universities were telling students to stay at home in light of the COVID-19 pandemic,” Virginia Business stated.

As for the Falwells’ tangled history with the “ambitious” Granda, Virginia Business reported that in 2013, a shell company, Alton Hostel LLC, bought a Miami Beach youth hostel for $4.65 million, with Falwell’s son Jerry “Trey” Falwell III listed as sole manager.

“Granda managed the hostel, and Falwell III was given the money to purchase the property by his father, Falwell Jr,” it stated.

Granda told Reuters that he fell out with the Falwells in 2018 after he wanted to “negotiate a buyout” and cut ties with the couple.

He produced a text message to Falwell from this June in which he wrote: “Since you’re okay with ruining my life, I am going to take the kamikaze route … It really is a shame because I wanted to reach a peaceful resolution and just move on with our lives but if conflict is what you want, then so be it.”

Falwell replied: “You should by now understand that I will not be extorted. I have always treated you fairly and been restrained in response to your threats because I did not wish to ruin your life. Going forward, stop contacting me and my family.”

Corporate records show Granda has a current stake in the venture, Reuters reported.

But there may be more to the story than that. The “gay-friendly” hostel became known as one “of South Beach’s best budget party hostels,” according to a 2019 New York Times story looking into the genesis of Falwell’s surprise endorsement of now-President Donald Trump over Ted Cruz just before the 2016 Iowa caucuses.

Falwell’s staunch support is seen as critical in swinging the evangelical vote to Trump, and he remains one of the president’s most outspoken evangelical supporters. Becki Falwell, 53, also served on the advisory board of Women for Trump.

However, Falwell came under fire as the first well-known evangelical leader to endorse the thrice-married real estate tycoon, whom he met in 2012 when Trump, then the star of “The Apprentice” reality show, visited the campus along with his then “fixer,” Michael Cohen.

According to the Times, Cohen — now serving his three-year sentence at home because of the coronavirus and in the news Tuesday for releasing an attack video on Trump — offered to help the Falwells in late 2015 deal with a pending lawsuit by Granda and his business associates, who argued they had been promised an ownership share in the hostel property, which also houses a liquor store and a restaurant.

Reuters also reported in 2019 that Cohen had been recorded saying Falwell also asked him in 2015 for help in preventing the publication of racy “personal” photos, of the kind kept “between husband and wife,” that had fallen into the possession of an unidentified individual, and that Cohen intervened and assumed the photos were destroyed.

Two anonymous sources “familiar with the matter” told Reuters at that time that Cohen helped to persuade Falwell to back Trump just before the Iowa caucuses, and that this was unrelated to the photo incident.

With Falwell gone, South Carolina representative Mark Walker told Politico he spoke to a Liberty board member about the possibility of taking over as leader of the “powerhouse” evangelical school, Politico reported.

Walker, who is vice chair of the House Republican Conference and retiring from Congress this year, was among those calling earlier this month for Falwell to go, and denouncing his behavior “appalling.”

His first focus now “is for the Liberty University family to find healing,” Walker said.

Former Liberty University professor Karen Swallow Prior told CNN she is “thankful that the truth had come out” and that the school could “move on.”

“The kind of things that have been revealed in the last couple of days are not things that happen in isolation,” she told Anderson Cooper.

“There have been red flags for a long time. The kind of arrogance and authoritarian leadership that we experienced as faculty was really just a symptom of this lifestyle, in which he thought he could do anything and get away with it.”

Liberty stated Tuesday that board member Jerry Prevo will continue as acting president.

“The university’s heartfelt prayers are with [Falwell] and his family as he steps away from his life’s work,” it added.

Falwell has also asked for prayers.

“The trauma of this experience has brought us to a very challenging point in our lives, but we are strong, our faith in Christ is greater than ever,” he wrote in the Washington Examiner.

“With His help and with those in the community who we love and who appreciate the impact of forgiveness, we will get through this. We ask for your prayers and support.”