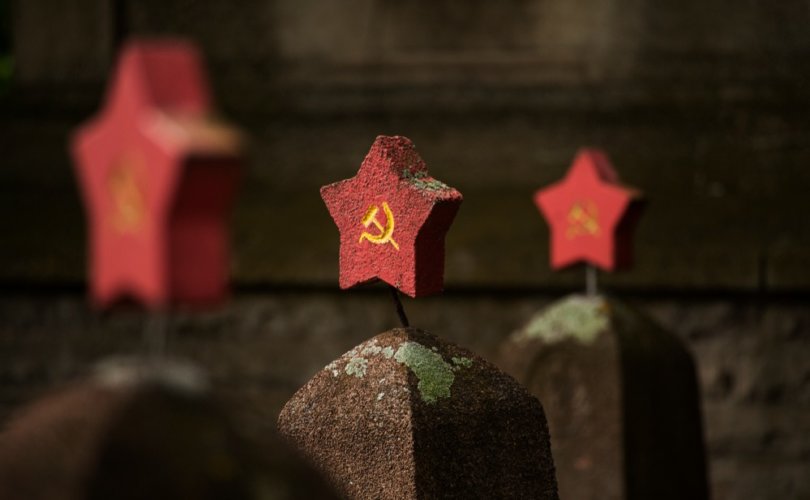 July 24, 2019 (LifeSiteNews) — The Jesuit-run America magazine published an article this week claiming that the Catholic faith can be reconciled with the ideology of communism, despite the fact that communist regimes are responsible for the deaths of countless millions through executions, labor camps, starvation, and numerous other cruel projects of social engineering.

Writer Dean Detloff identifies Catholic pacifist and civil rights leader Dorothy Day in “The Catholic Case for Communism” as a faulty critic of communism. Day, a co-founder of the Catholic Worker movement, was a critic of unbridled capitalism, who also found fault with communism. He writes that Day taught that Catholics should “hate communism but love the communist” and that even while “goodness” attracts some people to the communist movement, it has “the distinct view of tearing down the church.”

Multiple popes have condemned communism explicitly in various encyclicals. For example, Pius IX referred to socialism and communism in Nostis et Nobiscum (1849) as espousing “wicked theories,” and Leo XIII wrote of “that sect of men who, under various and almost barbarous names, are called socialists, communists, or nihilists, and who, spread all over the world, and bound together by the closest ties in a wicked confederacy … strive to bring to a head … the overthrow of all civil society whatsoever” (Quod Apostolici Muneris, 1878). Other popes who have criticized socialism include Pius XI, John XXIII, and Benedict XVI.

Though Day’s sympathetic criticism of communism is in many ways commendable, nearly a century of history shows there is much more to the story than these two judgments suggest. Communist political movements the world over have been full of unexpected characters, strange developments and more complicated motivations than a desire to undo the church; and even through the challenges of the 20th century, Catholics and communists have found natural reasons to offer one another a sign of peace.

He goes on to say:

Communism in its socio-political expression has at times caused great human and ecological suffering. Any good communist is quick to admit as much, not least because communism is an unfinished project that depends on the recognition of its real and tragic mistakes.

In an email response to LifeSiteNews, Catholic investigative journalist Stephanie Block said of Detloff’s attempt to reconcile Marxism and the Catholic faith: “The problem with socialist apologists who imagine that they can wed socialist ideology to Christian theology is not that they ignore history (or current events) but that they dismiss the fact that, for this marriage to take place, Christian theology will be — must be — fundamentally altered.” She noted the recent passing of Sister Christine Stephens, a leader of the “socialist democratic” Industrial Areas Foundation (IAF), which was founded by atheist Saul Alinsky to “operate within religious institutions, like synagogues and churches.”

Block, who has written extensively on IAF infiltration of the Catholic Church, noted Stephens’s obituary, which said in part: “The work of justice was at the heart of her ministry and her life. Her work with the Industrial Areas Foundation (IAF) was the vehicle to funnel her anger against injustice.” Block commented that the above description “reflects what happens when socialism takes on religion. God is no longer understood to be the heart of one’s ministry — ‘justice’ is.  And, ‘justice’ is nothing more than a solution men build for themselves using ‘god’ as a rubber stamp.”

Detloff asserted that “any good communist is quick to admit” the many “mistakes” committed in the name of communism. After noting American communists’ support for Adolf Hitler and their attacks on Jewish groups and trade unions following the Soviet Union’s secret pact with Nazi Germany, as well as communists’ willingness to see millions killed to advance their goals, Catholic League president William Donohue commented, “The communists made no ‘mistakes.’ That is a myth.” Donohue wrote that there is a “direct line between Marxist ideology and genocide.” He quoted Russian author Aleksandr Solzhenitsyn, who said Josef “Stalin did not pervert Marxism — he perfected it.” Donohue opined: “To those who understand human nature, none of this is surprising. To those who don’t, it is a mystery.”

Detloff’s article was met by plenty of commentary on social media. Catholic journalist Damian Thompson of the Spectator issued a tweet that offered an image of a mock future issue of America magazine that featured an article by Chinese communist leader “Bishop” Xi Jinping.

Exclusive sneak preview of the next issue of @americamag pic.twitter.com/xA0Qe5F1pW

In response, America magazine general editor Fr. Matt Malone, S.J. defended the publication of Detloff’s article, saying that doing so is in the magazine’s tradition of offering a variety of opinions from Catholic writers.