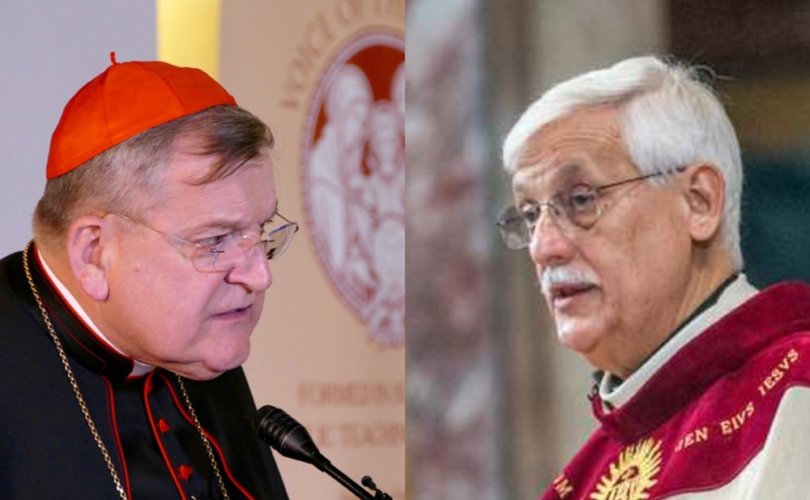 ROME, Italy, April 11, 2017 (LifeSiteNews) — It is “completely wrong” for the head of the Jesuit order to suggest that Christians don’t know what Jesus really said about divorce because it wasn’t tape-recorded, said Cardinal Raymond Burke in a new interview.

Such statements are a “serious mistake” that need to be “corrected,” he added.

Cardinal Burke was reacting to statements made earlier this year by the Jesuit’s new Superior General Fr. Arturo Sosa Abascal, who claimed that the words of Jesus against divorce are “relative” and must be “discerned” according to the “conscience” of each individual.

“There would have to be a lot of reflection on what Jesus really said. At that time, no one had a recorder to take down his words. What is known is that the words of Jesus must be contextualized, they are expressed in a language, in a specific setting, they are addressed to someone in particular,” he said in a February interview with Rossoporpora.

The Jesuit’s statements caused a backlash from faithful Catholic bloggers, who accused him of relativizing the Bible, of casting doubt on the words of Jesus, and of doctrinal heresy.

Cardinal Burke said in the April 10 interview with InfoVaticana that he could not “understand” how a prominent leader in the Church could make such a mistaken statement.

“This is completely wrong. In fact, I find it incredible that he could make these kinds of statements. They also need to be corrected. It is unreasonable to think that words in the Gospels, which are words that, after centuries of studies, have been understood to be the direct words of Our Lord, are now not the words of Our Lord because they were not tape-recorded. I can’t understand it,” he said.

When the interviewer suggested that Sosa Abascal might have made a “simple mistake,” Burke corrected him.

“It is a serious mistake that needs to be corrected,” he said.

The Cardinal said that it would be the responsibility of the Congregation of the Doctrine of the Faith, what he called the “pope’s organ for safeguarding the truth of the faith and morals,” to issue such a correction.

But Sosa Abascal has rejected charges of “relativizing” the words of Jesus in a April 9 interview with Italian news service TGCOM24.

“I don’t know why so many people got mad at me for what I said, which is that in the time of Jesus there were no tape recorders, because it’s the truth,” he said.

He attempted to walk back his earlier controversial statements, saying now that the “words of Jesus must be understood in context, as interpreted, in the ample sense, by the Church.”

“Father Sosa insisted that this was not ‘relativism;’ be that as it may, it certainly is Gnosticism, of a distinctly modern form,” he wrote.

The Catholic Church teaches in Dei Verbum: Dogmatic Constitution on Divine Revelation that the authors of Scripture “consigned to writing whatever [God] wanted written, and no more.”

Commented Weigel: “So, no, no one had a tape recorder; the gospel writers had something better – the assistance of the Holy Spirit in preparing texts that included ‘whatever [God] wanted written, and no more.’”

“It has been clear for over two years that the marriage/divorce/holy communion controversy pits those who, with Vatican II, affirm the reality of revelation against those who insist that experience and history judge revelation. We can be grateful to Father Sosa for underscoring this point in an unmistakable way,” he wrote.

Cardinal Burke: Pope ‘has not granted me an audience’