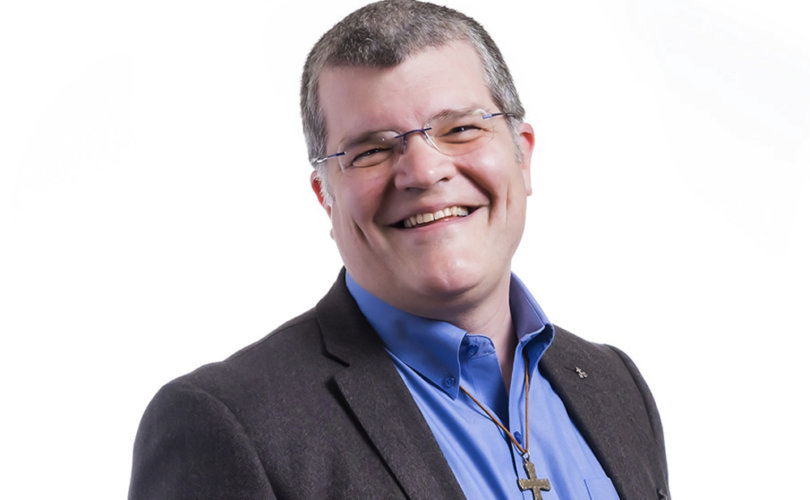 TORONTO, October 19, 2016 (LifeSiteNews) — A Jesuit college affiliated with the University of Toronto is embroiled in controversy over a lecture series that uses a document from the bishops that aims to uphold the Church’s teaching that homosexual acts are immoral.

The university’s paper, The Varsity, has criticized the Regis College lecture series “That They May Have Life to the Full — Accompanying LGBT Youth” for using the bishops’ “Pastoral Guidelines to Assist Students of Same-Sex Orientation” as a text for the three-part series for Catholic educators.

Jesuit Father Gilles Mongeau, a professor at Regis, is presenting the series, which is intended to train Catholic teachers and school board staff on providing support and pastoral care for high school students who self-identify as LGBTQ.

In an article titled “LGBTQ lecture series at Regis College sparks concern,” The Varsity’s Lesley Flores writes that the bishops’ guidelines state “that gay and lesbian adults should remain celibate in order to live moral lives.”

Issued by the Assembly of Catholic Bishops of Ontario in 2004, the guidelines affirm Catholic teaching that homosexual tendencies are objectively disordered but not sinful, and that homosexual acts are immoral.

Flores quotes an email to The Varsity from U of T alumnus Matthew MacDonald, who charges that by using the guidelines, the Regis course is “appalling” and “pure bigotry” and “harmful and damaging — as a bisexual man who grew up in a Christian household, I can attest to the inner torment and anxiety these kinds of programs and teachings cause in youth and LGBTQ people of all ages.”

Fr. Mongeau told The Varsity that “it’s just not possible in a Catholic school to propose alternative moral paths. … The challenge is to present that teaching in a way that remains psychologically sound.”

He “insisted,” Flores wrote, that the guidelines focus on supporting LGBTQ students in Catholic schools. “If you read through all of them, you see where they’re saying ‘be compassionate, be careful, don’t use power.’”

“It will not be a part of this lecture series to suggest that the experience of homosexual or non-cisgender gender identity is wrong,” he said.

“What we’re trying to prevent by having this [lecture series] is instances where religious authority or any form of power is used to oppress the young person or cause them to have a distorted psychological or psycho-spiritual development.”

He said that administrators in Catholic schools should “ensure that homophobia and transphobia are overcome and prevented in the school” by establishing a “safe environment” and ensure that there are LGBTQ peer support groups in the school, Flores wrote.

Fr. Mongeau was the first pastor for All Inclusive Ministries, which is based at Our Lady of Lourdes Parish and describes itself as a “welcoming, safe, and affirming Catholic community” that serves as “a bridge between the Church and lesbian, gay, bisexual, and transgender persons.”

In 2014, All Inclusive Ministries raised concern among faithful Catholics when they held a special Mass on the occasion of the Toronto “WorldPride” parade. The event was dubbed by some supporters a “WorldPride Eucharistic Celebration.”

The Varsity also contacted the U of T public relations, which distanced itself from Regis College, with media director Althea Blackburn-Evans noting that the Toronto School of Theology “and its members are solely responsible for creating and running their academic programs.”