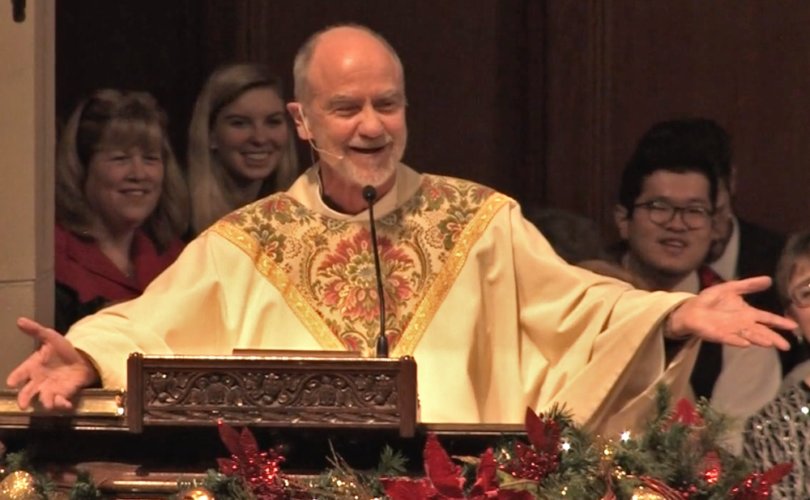 NEW YORK CITY, September 18, 2018 (LifeSiteNews) – A Jesuit priest at a well-known pro-homosexual Manhattan parish has been removed as pastor for “boundary violations” with “an adult male who attended the parish.”

Fr. Bob VerEecke has been removed as pastor of St. Francis Xavier Church and restricted “from the exercise of public sacramental ministry,” according to a September 15 letter from Jesuit superior John Cecero read out at parish Masses last weekend.

A letter from acting pastor Fr. Daniel Corrou posted on St. Francis Xavier website Tuesday revealed the allegations concerned “a recent, unwanted and inappropriate conversation and attention of a sexual nature toward an adult male who attended the parish.”

Corrou wrote that “there was nothing criminal about this interaction” and that VerEecke “agreed that the incident took place, acknowledges his lack of good judgement, and is sorry for the incident.”

This confirms the September 15 letter from Cecero, superior of the USA Northeast Province of the Society of Jesus.

“About a week ago, the Archdiocese of New York communicated to me complaints by an adult of boundary violations by Fr. VerEecke. I reviewed these complaints with Fr. VerEecke, and he acknowledges a lack of good judgment in his behaviour,” Cecero wrote.

“Consistent with our Province Ethics in Ministry policies, I am removing Fr. VerEecke from the Church of St. Francis Xavier and restricting him from the exercise of public sacramental ministry.”

Cecero’s letter continued, “I anticipate that many of you will share my regret in taking this action, but we as a Church have learned the hard way that boundary violations must be met with a swift and decisive response from church leadership.”

LifeSiteNews contacted the USA Northeast Province to ask if there would be further investigations into Fr. VerEecke’s conduct, and if his suspension was indefinite.

“The province has nothing to add to the statement/letter that has already been issued on matters concerning Fr. VerEecke at this point,” Michael Benigno, director of communications, responded in an email.

The Jesuit announcement comes as the Catholic Church in the United States is rocked with sex abuse scandals, and two weeks after two Archdiocese of Chicago priests – one incardinated there and one “extern priest” from Colombia – were charged with lewd and lascivious behavior after being arrested on Labor Day for allegedly engaging in oral sex in a car on a busy street.

St. Francis Xavier is notorious for its support of the LGBT agenda, hosting regular meetings for Catholic Lesbians and Gay Catholics. It draped a rainbow flag on the altar steps after the Obergefell decision legalizing same-sex “marriage” and in conjunction with the city’s Pride event, Church Militant reported in June 2015.

The parish traditionally marches in the NYC Pride Parade, which was organized this year by parish staff Robert Choiniere, doctoral student at Fordham University, and co-producer of “docudrama” Full of Grace: The lives of LGBT Catholics.

“Celebrating Pride is about as Catholic as you can get,” Choiniere, who appears holding a rainbow umbrella on a New Ways Ministry report on LGBT Catholics in Dublin for the World Meeting of Families, wrote in the June 24 parish bulletin.

“St. Francis Xavier has been a shining example for many decades of this truth…The sacred procession of Pride is a proclamation of our identity as Children of God,” he wrote.

Indeed, New Ways Ministry, a dissident group that lobbies the Catholic Church to accept homosexuality, lists St. Francis Xavier as one of its “LGBT friendly” parishes.

Jesuit Fr. James Martin, who has been lobbying the Church to normalize homosexuality, is scheduled to speak at the parish October 3.

Martin, “friend of Xavier was present at the World Meeting of Families in Dublin,” will speak on “how the Catholic Church and the LGBT Community can enter into a relationship of respect, compassion and sensitivity,” the parish website says.

“Jim will be at Xavier to speak about his experience in Dublin in light of recent painful events in the church,” the announcement says.

In June last year, VerEecke led parishioners of St. Francis Xavier in a “wave” as he danced in the sanctuary, and several young women swirled around in front of him to “Celebration” by Kool and the Gang.

He posted a video of his 2015 liturgical dance for Midnight Mass, as reported by Church Militant.