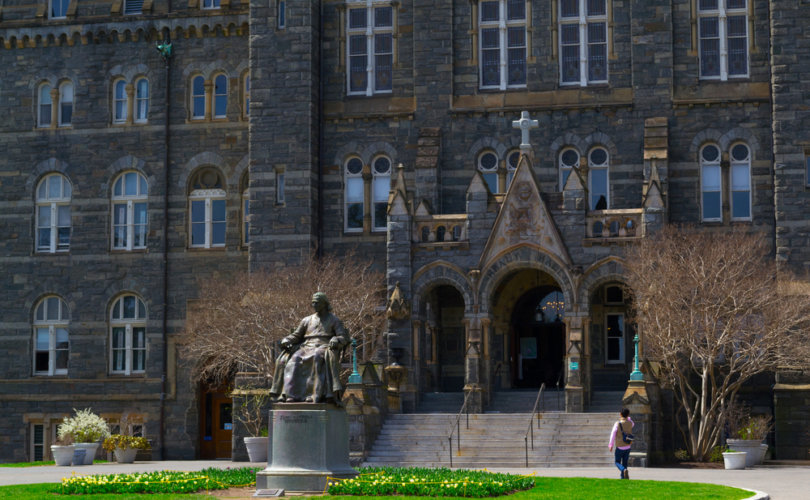 April 29, 2016 (CardinalNewmanSociety) — Two Jesuit professors at Georgetown University lobbied to have a pro-life speaker on-stage with Planned Parenthood CEO Cecile Richards when she spoke on campus, but the proposal — made to help facilitate the “free exchange of ideas” — was rejected by the organizers of the event, the campus newspaper The Hoya reported.

“It’s wounding to me that students in a Jesuit school would reject the good counsel of two senior Jesuit professors,” theology professor Father Stephen Fields, S.J., told The Cardinal Newman Society. “We had  to promote the FULL free exchange of ideas, and so heal a deep rift on our campus. It pains me that the Lecture Fund seems to have put its own career plans over our community’s integrity.”

Fr. Fields and Father Ladislas Orsy, S.J., who teaches canon law, approached the student-run Georgetown Lecture Fund about a month ago with a proposal to have a speaker present the pro-life position opposite Richards on April 20.

“We thought that [the Lecture Fund] would surely be interested in a full, free exchange of ideas, so we suggested that they have someone like Helen Alvaré or Kirsten Powers come, not as a debate, but perhaps as two speakers,” Fr. Fields told The Hoya. “Then both of them together would field questions from everybody in the audience and that way both sides of the issue could be aired and the opinions of our students could be helpfully informed on the spot.”

But the Lecture Fund denied the proposal:

Fields and  met in the Jesuit Residence at Wolfington Hall on March 18 with three university administrators and the 16 available members of the Lecture Fund’s Associate Board to deliver the proposal.

The result of the vote — after concluding deliberations that began at the previous Lecture Fund Associate Board meeting March 22 — was clear. The board voted by a majority to keep the event as planned.

Chair of the executive board for the Lecture Fund Helen Brosnan (COL ’16), who co-planned the event, said obligations grounded in the group’s policy and constitution to honor previous invitations to Richards to speak unchallenged, were the major motivations behind rejecting the proposal.

Brosnan told The Hoya that the Lecture Fund has attempted to host Richards on campus since 2012. “This has been one of my career goals at Georgetown, to bring her, so it’s been a long process,” she said.

The University cited a commitment to the “free exchange of ideas” in a statement defending the invite to Richards, and said her appearance on campus is not an endorsement of her speech. Richards’ lecture to about 400 students at America’s oldest Catholic and Jesuit university was used to promote the “services” of Planned Parenthood, including the immoral acts of abortion,  and sterilization.

“The administration’s disclaimers about not endorsing guest speaker views and appealing to free speech arguments cannot be taken seriously as excuses to what students were exposed to yesterday. There was no academic benefit for students, nor was this event an attempt to aid students in the pursuit of truth and knowledge,” The Cardinal Newman Society stated in response to the speech. “Cecile Richards’ lecture at Georgetown was nothing more than a pep rally for Planned Parenthood and the terrible, evil work that organization is openly committed to doing.”

The students argued that Richards’ views could be judged “grossly obscene” and therefore impermissible. “[A]nd under the university’s Access to Benefits policy,” according to the report, the students argued “that the Lecture Fund’s invitation of Richards ‘substantially [advocated] positions inconsistent with Roman Catholic moral tradition’ and  halt her speech.”

“Assistant Dean for Student Engagement Erika , who serves on the committee, said it understood the students’ concerns and gave them feedback about the committee’s interpretation of university policy,” The Hoya reported. Ultimately the committee ruled against the students’ objections.

Earlier this month, a group of pro-life students met with Georgetown President John DeGioia “for about an hour” to express their concerns about Richards’ lecture.

GU Right to  President Michael Khan told The Hoya that DeGioia “seemed sympathetic to the students’ concerns,” but the University refused to rescind the invitation to Richards.

“He really wanted to listen, so we expressed our objections, our concerns and how we think this not only violates the mission of our school but the free speech codes,” Khan said. “We got out of that [meeting] probably what we expected to, which was not much.”

“Georgetown University officials must take full responsibility for the scandalous, immoral and anti-Catholic comments made by the president of Planned Parenthood to students yesterday — with the full approval and defense of the nation’s oldest Catholic university — and they should make immediate changes to their speaker policy to uphold truth and avoid endangering the souls of their students,” the Newman Society stated.