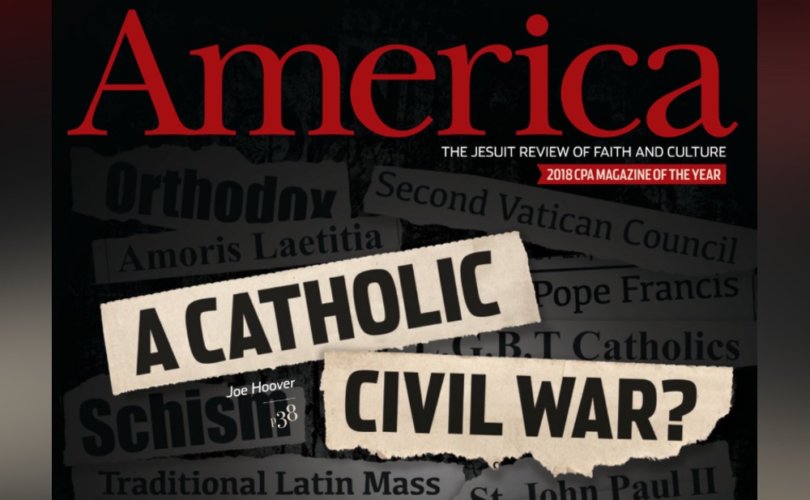 NEW YORK, October 29, 2018 (LifeSiteNews) – The Jesuit-run publication America has carried an article by a professor-psychologist who claims that homosexuality is not the “root cause” of clerical sexual abuse. The photo accompanying the article contained an angel with a rainbow in the background.

Dr. Thomas G. Plante, a professor of psychology at the Jesuit Santa Clara University and an adjunct clinical professor of psychiatry at the Stanford University School of Medicine, had his article published on October 22 in which he states that sexual orientation is “simply” not a factor in the clerical sex-abuse of minors.

“Many people believe that homosexuality is the root cause of sexual abuse by clergy in the Catholic Church since about 80 percent of the known victims have been male,” he wrote.

“This has led some church leaders to suggest that banning homosexual men from the priesthood could prevent future victimization of children in the church,” he continued. “While it may be understandable that some believe this, it is simply not true,” he averred.

Plante did not appear to understand that men with deep-seated homosexual attractions are already de jure, if obviously not de facto, barred from admission to seminaries. This teaching in the Catholic Church is not new and has been backed by Pope Francis.

Plante said that readers need to be clued in on the “psychopathology of sex offenders and pedophiles” to understand the issue.

It was one of many times in which Plante skirted the fact that the majority of underage victims, at least in the United States, have not been pre-pubescents who are of sexual interest only to pedophiles but adolescent boys.

The Pennsylvania Grand Jury Report clearly identified the 78% of abuse cases it scrutinized as examples of “homosexual predation”. However, despite this finding, Plante wrote that “the research data on the topic makes clear that sexual orientation alone is not a risk factor for pedophilia or for committing sexual crimes against children or teens or anyone. Sexual orientation by itself is irrelevant to child sexual abuse behavior or risks.”

Plante suggested that priests who prey on male children and teens have been “‘situational generalists’, or men who simply abused victims to whom they had access” and “with whom they had the opportunity to develop trust.”

“In the Catholic Church, these individuals tended to be boys. If Father wanted to have private time with an altar boy or perhaps take a boy off on a camping trip or to a baseball game back in the 20th century, no one would have thought much of it. Boys were trusted with priests. But most of the clergy sex offenders during the last half of the 20th century, according to the [second, 2011] John Jay Report, viewed themselves as more likely to be heterosexual than as homosexual,” he wrote.

“Sexual orientation is not a risk factor at all,” he concluded.

Then he divided child abusers into those who target children, those who target teens those who prefer adult sexual partners but “select minors as a substitute”, and those who “like most clerical sexual offenders in the church elect those with whom they have access and trust.”

Blaming homosexual men for sexual abuse of minors is not the solution, Plante counsels. He also reminds readers that only a small percentage of people select children and teens for sexual abuse, and most of them are heterosexual, married and “noncelibate” [sic] lay people who “tend to exploit members of their own family.”

Plante's interpretation of the data may not provide the full picture. He failed to mention the findings of the first John Jay report.

There were two John Jay Reports into clerical sexual abuse in the United States. The first John Jay Report, published in 2004, was officially called The Nature and Scope of the Problem of Sexual Abuse of Minors by Catholic Priests and Deacons in the United States. This first study reported that 81% of victims within the fifty year period under scrutiny were male. Of all the victims, only 22% were under the age of 10. Of the remainder, 51% were aged between 11 and 14, and 27% were aged between 14 and 17.

The second John Jay Report, published in May 2011, was officially called The Causes and Context of Abuse of Minors by Catholic Priests in the United States, 1950-2010.  As Plante attests, it blames “situational generalists” for the attacks on boys.

But not every psychiatrist agrees with Plante or the second John Jay Report’s assurances that the primary reason that criminal clerics preyed on males was opportunism.

Dr. Rick Fitzgibbons recently wrote in LifeSiteNews  that his professional opinion “as a psychiatrist with forty years of clinical experience is that the cause of the abuse crisis is rooted in psychological and spiritual conflicts in bishops and in priests, specifically a narcissism and a profound weakness in male confidence which inclines them to homosexual predation.”

Citing his 40 years of treating priest abusers, Fitzgibbons said that in every case of sexual involvement with children or teenagers he knew of, “the perpetrator had previously been involved in adult homosexual relationships.”

“The Causes and Context study (2011) by the John Jay College of Criminal Justice concluded that the childhood and adolescent sexual abuse committed by clergy was unrelated to homosexuality,” he observed.

“Instead, they identified the predation and abuse of adolescent males, the primary victims in the crisis, as a crime of opportunity or availability.  While criminologists may describe homosexual predation in imprisoned men as arising from availability, this theory is not applicable to the general public or to priests,” he continued.

He thinks there was a deceitful attempt on the part of those involved in the report to cover up the role of homosexuality.

“The John Jay second study ignored the severe psychological conflicts and grooming behaviors in priests and bishops, such as Archbishop McCarrick who sexually abused minors, seminarians and adults,” he wrote.

The psychiatrist told LifeSiteNews that by disguising the real causes, the cover up of clerical sexual abuse of minors is still going on. Fitzgibbons is particularly incensed at the blame being placed on “clericalism” by Pope Francis.

“We have this massive, massive denial of the true origins,” he said.

Fitzgibbons has asked for Pope Francis to stop the cover-up.

“The Pope should acknowledge that the worldwise sexual abuse crisis is caused by clerical homosexual predation. The logical response: encourage priests and seminarian to lead chaste lives.”

He recommends that the Courage apostolate be developed for international online use in the Church “as soon as possible” to assist clerics in remaining chaste and to protect “youth adults and seminarians from ongoing sexual abuse.”