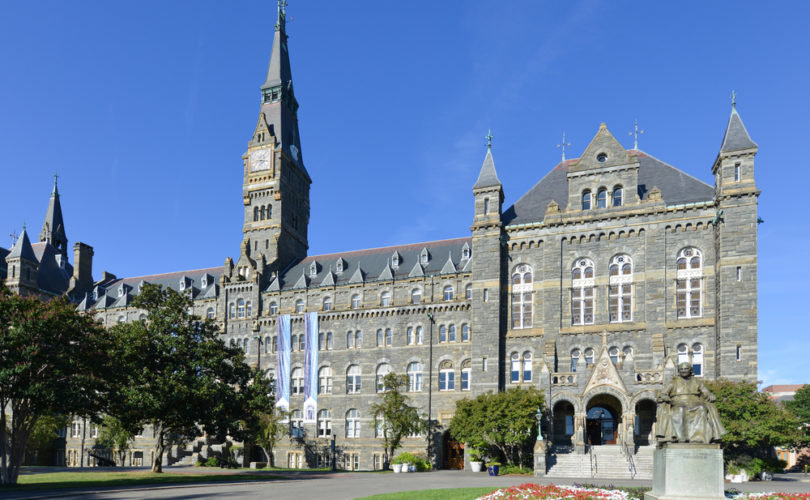 January 9, 2019 (LifeSiteNews.com) – Jesuit-run Georgetown University has instituted a policy allowing people to make anonymous tips against anyone they regard as having said something insensitive to their minority status, an offense known as a “microaggression.”

The policy includes “microaggressions” against people based on their “sexual orientation” or “gender identity or expression,” making a possible target of Christians, Jews, Muslims, and others who reject LGBT ideology.

The policy is being implemented by Georgetown’s medical school, whose “Office of Diversity and Inclusion” has posted a page entitled “What To Do About Microaggressions” on its website, and has initiated a propaganda campaign for the policy using posters placed on campus.

The definition of a “microaggression” given by Georgetown is so vague and general that it appears that virtually any behavior or even circumstances in the environment might be interpreted as constituting the offense.

A poster used by Georgetown in the campaign informs students that microaggressions are “brief and commonplace daily verbal, behavioral, or environmental indignities, whether intentional or unintentional, that communicate hostile, derogatory, or negative slights and insults,” adding that “They perpetuate bias throughout the community and occur everyday (sic).”

The site suggests a series of steps to deal with such offenses, including questioning people about the motives of their statements, telling others about the offending remarks, and requesting that “appropriate action be taken.”

Georgetown has further provided an online anonymous tip form that encourages people to report “any type of bias” and lists a number of types of microaggression that include “sexual/gender” but do not include offending people on the basis of their religion. “If you would like to anonymously report something that you feel is an issue in your learning environment, please submit your comment below. Concerns may include, but are not limited to, threatening behavior, intimidation, assault, harassment, or any type of bias (cultural/sexual/gender/race or other),” Georgetown states.

One example given by Georgetown of a “microaggression” is diagnosing a patient with HIV based at least in part on the fact that he is homosexual. The U.S. Centers for Disease Control’s own statistics indicate that more than 50 percent of people with AIDS are “men who have sex with men.”

The university also has instituted a campaign of placing posters on campus to educate the student body about “microaggressions in medicine,” to “educate our community on the what, how, why, and what to do about microaggressions.” The school says it wants to build “efficacy in faculty, staff, students and trainees who must respond in real time to microaggressors.”

The vague notion of “microaggression” has become infamous in recent years for creating an environment of fear in which students are subject to arbitrary accusations simply for offending the sensitivities of another person. It also is used to silence those who refuse to accept LGBT ideology.

Commenting on the “microaggression” guidelines at UCLA, sociologist Frank Furedi argues that “anything that is said to someone from a different cultural group may constitute a microaggression,” and notes that even the phrase “politically correct” is now censored as a form of the offense.

“So, declaring that ‘America is the land of opportunity’ could be construed as a microaggression because it implies that ‘race or gender does not play a role in life successes.’ There seems to be a veritable industry producing guidelines, running sensitivity seminars and creating microaggression-awareness websites. At the same time, the number and variety of words and expressions castigated as aggressive and threatening are constantly expanding. … By attempting to censor the phrase ‘politically correct,’ microaggression-watchers proved they were indeed in the business of policing language.”

The oppressive atmosphere created by the “microaggression” industry has even led to action by the Justice Department against the University of Michigan.

The department has intervened in a lawsuit against the university over its “bias” policies, filing a Statement of Interest in the case of Speech First, Inc., v. Schlissel in the Eastern District of Michigan, which accuses the University of Michigan of violating freedom of speech.

“The United States’ Statement of Interest argues that the University of Michigan’s Statement of Student Rights and Responsibilities, which prohibits ‘harassment,’ ‘bullying,’ and ‘bias,’  is unconstitutional because it offers no clear, objective definitions of the violations,” the Justice Department said in a press release in June. “Instead, the Statement refers students to a wide array of ‘examples of various interpretations that exist for the terms,’ many of which depend on a listener’s subjective reaction to speech.”

The University of Michigan’s policy defines a “bias incident”  as “conduct that discriminates, stereotypes, excludes, harasses or harms anyone in our community based on their identity (such as race, color, ethnicity, national origin, sex, gender identity or expression, sexual orientation, disability, age, or religion). Bias may stem from fear, misunderstanding, hatred or stereotypes. It may be intentional or unintentional.”