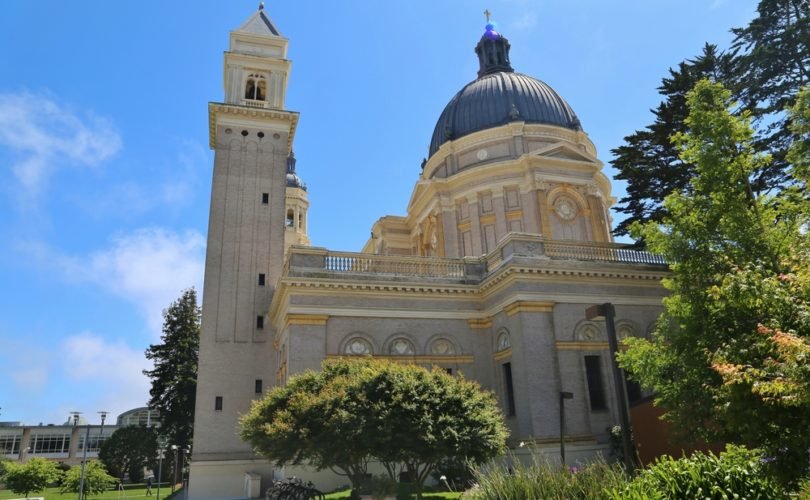 March 18, 2015 (CardinalNewmanSociety.org) — The University of San Francisco (USF) hosted a forum on March 16 sponsored by a group actively petitioning against Archbishop Salvatore Cordileone’s efforts to fortify Catholic identity in Archdiocese of San Francisco Catholic schools. The forum, Hear Our Voices, was held at the Jesuit university despite the fact that it featured speakers who have publicly criticized the Church.

Hear Our Voices invited attendants to participate in “an evening of shared wisdom and discussion about Archbishop Cordileone’s proposed changes to the teachers’ contract and to the faculty handbook” of archdiocesan high schools, according to the event page. The forum reportedly featured speakers Brian Cahill, Jim McGarry, Leslie Griffin, and “a diverse panel of parents and students” from archdiocesan schools.

The Jesuit university’s Institute for Catholic Educational Leadership (ICEL) reportedly hosted the event at the request of students and alumni. The group Concerned Parents and Students: Teach Acceptance, the sponsor of the forum, actively opposes Archbishop Cordileone’s revisions strengthening Catholic identity and recently authored a petition denouncing the revised language.

Event speaker and National Catholic Reporter writer Brian Cahill has authored many pieces criticizing Catholic leadership. In one piece, Cahill alleged that the Church is “on track to become a shrinking, increasingly irrelevant cult” due to what he labeled “the hypocrisy, insensitivity, dishonesty and stupidity” of bishops defending the Church’s teaching on marriage.

In a recent article on ThinkProgress, McGarry was quoted as stating that Archbishop Cordileone “is not in compliance with Catholic teaching.” McGarry declared that the Archbishop Cordileone is “selectively choosing a small number of doctrines and putting them forward in a selective way and, I think, distorting the tradition … in a way that first of all endangers the health and well being of our children.”

In an open letter to students, McGarry termed the archbishop’s revised langue “repulsive” and encouraged students to “[s]tay faithful to your new perception—and thank the current generation of teachers who have helped inform your consciences and boldly inspired you to believe that human dignity is indivisible.”

As reported by Catholic News Agency, Leslie Griffin is “a constitutional law professor at the University of Nevada-Las Vegas who has previously worked with the Center for Reproductive Rights,” a global legal advocacy organization that touts its work expanding access to “safe abortion.”

Amidst the vocal opposition to the archbishop’s brave efforts to renew Catholic identity in schools, the “media campaign against the archbishop has also caused fear among his supporters,” who reportedly fear “‘defamation of character and ostracism,’” according to Catholic News Agency.

“People are afraid to speak up because most of their colleagues oppose the additions to the handbook and because of just how disturbingly negative yet powerful the voices of opposition are,” a Catholic teacher who has worked at an archdiocesan high school for several years, reportedly stated.

The Cardinal Newman Society contacted the University of San Francisco to ask about the forum. Anne-Marie Devine, the senior director of media relations at USF, told the Newman Society that USF’s “role as a university is to provide a space where genuine differences and diverse opinions can be addressed, openly and honestly, and to create an atmosphere of mutual respect, where many different voices and points of view can be freely expressed.” Devine stated that “hosting these events is an important civic responsibility, one USF accepts enthusiastically.”

However, the University permitted the Hear Our Voices event to take place on campus even though it was apparently aware that “both sides of the debate were not going [to] be represented,” according to Devine’s statement. The University had first requested that event organizers “reach out to the Archdiocese so that a dialogue with all points of view could be considered.” That didn’t flush out so “USF President Paul J. Fitzgerald, S.J. asked that organizers read a statement clarifying the University’s role in this event and that hosting this event is not an automatic endorsement of the views expressed,” Devine said. The statement was read at the beginning of the forum.

Calls to the ICEL and Concerned Parents and Students were not returned by time of publication.