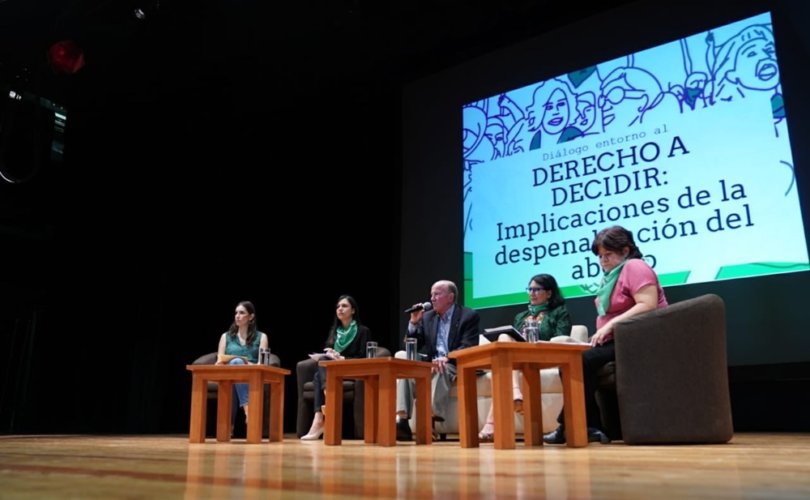 The priest-rector of the Jesuit University of Guadalajara appears on stage with abortion activists at the event.

GUADALAJARA, Mexico, September 28, 2018 (LifeSiteNews)  — A Jesuit university in Mexico hosted a pro-abortion event despite pro-life protests and a temporary cancellation.

On September 26, the ITESO (Western Institute for Technology of Education) – Jesuit University of Guadalajara hosted three pro-abortion speakers. Although the event had been advertised as a “dialogue,” no pro-lifers were invited to speak. The event was called “Dialogue on the Right to Decide.”

The presentation, recorded at the University’s Pedro Arrupe, S.J. Auditorium, can be viewed on Youtube.

López said that the event was organized by some students of international affairs and public administration and that the Rector of the University, a Jesuit priest named José Morales Orozco, granted permission.

A tweet from the university shows the rector on stage with the abortion activists, and quotes him as saying, “There is no greater respect than respect for freedom of conscience.”

Following pro-life protests, an announcement was made on September 25 that that the event was cancelled. Pro-abortion activists blamed López.

“I don't consider myself responsible for [the cancellation], but apparently the supporters of the event do consider me responsible,”  the young professional told LifeSiteNews.

“What I did was to post a series of tweets expressing my concerns about the Jesuits allowing that event on their campus,” López continued.  “I mentioned Cardinal Robles, the Archbishop of Guadalajara, and other pro-life activists. Soon after that, many people started to talk about the event on Twitter and Facebook and to ask the university to cancel the event.”

López says that pro-abortion students and faculty protested the decision and announced that the event would be relocated to a public park. Meanwhile, the university’s reasons for cancelling the event were deeply insulting to the faithful Christians who protested.

“They said that due to all the discussion related to the event, they could not warrant the safety of the [audience],” López said. “They wrote an official letter in which the pro-lifers were … depicted as a hate group.”

“I'm concerned about this: their decision was influenced by hypothetical violence from pro-lifers rather than by the opposition of abortion and the Catholic doctrine,” he added.

However, the event went ahead as planned, the university having been pressured by students, the young man said.

“The students said that if the university didn't allow the event on campus, they were going to have it on the street anyway, and that the [Rector, José Morales Orozco, SJ] was going to be responsible if something bad happened to them.”

Fr. Orozco gave the opening speech at the pro-abortion event.

“He said he took the wrong decision when cancelling the event, but he was glad [that] they could finally have that dialogue, and again he spoke about hate groups,” López recalled.

“He also made a demonstration of his open mind by saying that the university is open to dialogue, and that one should respect another's freedom of conscience,” the young man continued, “which actually meant that the morality of abortion depends on each one's personal views and not on the objective fact that it ends the life on an innocent human being.”

“They preferred a Marxist speech and sentimentality,” he stated.

This is not the first time the Jesuit university has encouraged abortion advocacy. ITESO’s “Magis” journal recently published an article arguing for abortion from a Marxist perspective.

“Many students [at ITESO] are anything except devoted Catholics,” López said. “Some of them said on Twitter that the university doesn’t have any issues with having a pro-abortion event, since ‘it is not a Catholic university, it is a Jesuit university’, as if Jesuits weren’t Catholics.”

To make your concerns respectfully known to the Jesuit University of Guadalajara: