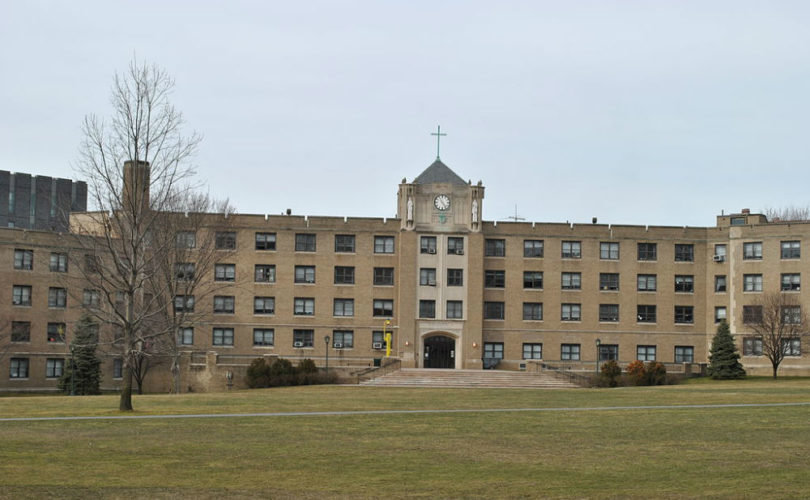 NEW YORK, June 2, 2017 (LifeSiteNews) – A Jesuit university that just refused Chick-fil-A’s admittance on its campus due to LGBT pushback is co-presenting a conference next week with the euthanasia advocacy group behind the push to legalize physician-assisted suicide in the state.

The Fordham University Graduate School of Social Service will host Palliative Art on June 7 along with End of Life Choices New York (EOLCNY).

EOLCNY is backing the Medical Aid in Dying Act currently being pushed in New York.

The law allows terminally ill patients to request medication from a doctor to kill themselves. Oral arguments for the assisted-suicide law were presented before the New York State Court of Appeals on Tuesday, and a decision may come this month.

EOLCNY is a previous affiliate of Compassion & Choices (formerly the Hemlock Society), the euthanasia activist group that in 2014 used an electronic sympathy card for Brittany Maynard to garner signatures for a pro-assisted suicide petition.

Its mission states clearly, “We advocate to legalize medical aid in dying in New York through litigation or by legislation. EOLCNY has initiated a lawsuit which is currently making its way through the system. We seek a ruling to clarify that a mentally competent, terminally ill patient has the right to obtain medicine by prescription that he or she could ingest to achieve a peaceful death.”

Fordham’s mission states in part that, “As both Catholic and Jesuit in identity, Fordham University draws a great deal of its inspiration from both of these rich and lively traditions.”

LifeSiteNews did not hear back from Fordham by press time on its inquiry into how the university’s collaborating with the euthanasia activist group reconciles with its Catholic identity.

Despite Chick-fil-A’s efforts to partner with homosexual student group “Rainbow Alliance” to facilitate getting established on the Fordham campus, the university acceded to opposition from LGBT student groups last month to block the Christian-run restaurant from being allowed to open on campus.

The LGBT contingent continues to pillory Chick-fil-A for its owners’ holding a biblical view of marriage as between a man and a woman.

Next week’s Palliative Art conference is one installment among many collaborations between the Jesuit university and the pro-euthanasia group.

Fordham’s website shows that just in the past year it has co-hosted at least three other workshops with EOLCNY.

Last October, it was Fordham’s Department of Sociology & Anthropology along with Compassion & Choices and EOLCNY Executive Director Laurie Leonard as moderator presenting How to Die in Oregon: Screening & discussion of NY Medical Aid in Dying Act.

The month prior in September, EOLCNY and the Fordham University School of Social Work put on the Being Mortal Documentary and Discussion event.

In addition, the dean of Fordham’s Graduate School of Social Service, Debra McPhee, sits on the Board of Trustees for Catholic Charities in the Archdiocese of New York.

Leven has said publicly that neither the Catholic Church for any other religious group has a say in end-of-life issues, dismissing the voice of the disabilities rights community as well.

The Fordham Graduate School of Business Administration also partnered with Compassion and Choices of New York, including Leven, for a presentation on Palliative Care in New York State for the 2014 National Health Care Decisions Day.

Another partner in that event was the Collaborative for Palliative Care, which also has affiliations with Fordham.

Palliative care seeks to improve quality of life for patients with serious illness and their families. While the field itself is legitimate, it is often used for cover for such things as euthanasia or physician-assisted suicide, often through the use of certain problematic advance directives.

Euthanasia, assisted or not, is completely against the teachings of the Catholic Church.

“Whatever its motives and means, direct euthanasia consists in putting an end to the lives of handicapped, sick, or dying persons. It is morally unacceptable.

“Thus an act or omission which, of itself or by intention, causes death in order to eliminate suffering constitutes a murder gravely contrary to the dignity of the human person and to the respect due to the living God, his Creator. The error of judgment into which one can fall in good faith does not change the nature of this murderous act, which must always be forbidden and excluded.” (Paragraph 2277)

TFP Student Action is conducting a petition against the June 7 End of Life Choices New York event at Fordham University.