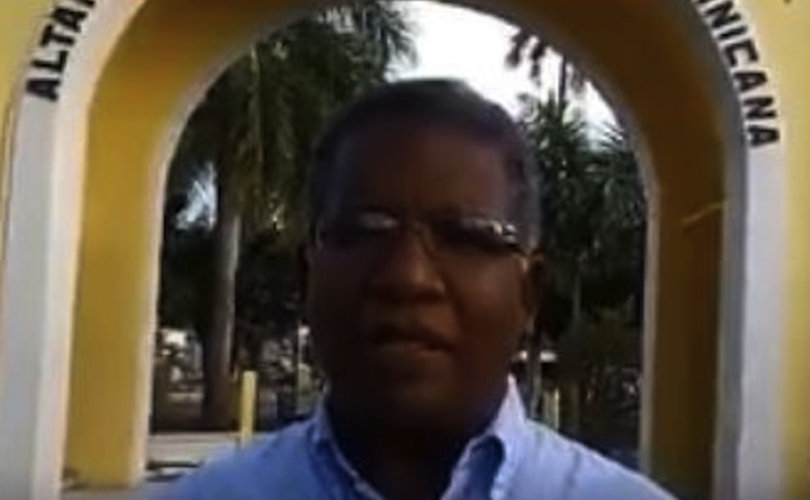 DOMINICAN REPUBLIC, July 20, 2018 (LifeSiteNews.com) – The superior of the Jesuits in the Dominican Republic has issued a statement rejecting the declarations of a Jesuit priest in his jurisdiction who recently joined a campaign to decriminalize abortion in that country.

In response to an inquiry regarding recent declarations by the Jesuit priest Mariano Serrano Marte supporting a bill to decriminalize abortion under several different circumstances, the Jesuits of the Province of the Antillas sent a press release to LifeSiteNews signed by the superior, Fr. Javier Vidal, repudiating Serrano’s position and affirming the Catholic Church’s uncompromising defense of the right to life.

“Various organizations from the Dominican Republic joined together last Sunday, July 15, 2018, for a ‘Walk for the Life, Health, and the Dignity of Dominican Women,’” wrote Vidal. “The organizers had as their central demand the legal decriminalization of abortion . . .”

“In this context, the priest Mario Serrano Marte, a member of our religious congregation, issued various messages in social media, affirming his support and promotion of the aforementioned walk and [its demand for] the decriminalization of abortion under three conditions,” he continued.

“In the face of this declaration, the Province of the Antillas of the Company of Jesus makes it known to the public that it is in agreement with the magisterium and the morality of the Catholic Church that are opposed to direct abortion. It also makes known that as an apostolic body it does not share the declarations made by the priest Mario Serrano in his own name.”

“Pope Francis writes under the title ‘Ideologies that mutilate the heart of the Gospel’ in his apostolic exhortation Rejoice and Exult of March 19, 2018 (no. 101): ‘Our defense of the innocent unborn . . . needs to be clear, firm and passionate, for at stake is the dignity of a human life, which is always sacred and demands love for each person, regardless of his or her stage of development.’”

“We wish to defend life from conception to death in all of its dimensions, in children as well as in mothers, in the elderly and migrants, in people who are suffering, exploited, and abused in multiple ways. And we want to have the light of the Spirit to discern with the whole Church when our judgment confronts extreme situations.”

“We ask our Lord Jesus Christ to enable us to find the ways to defend the lives of all human beings, life that is sacred because it is in the image and likeness of the Creator.”

The declaration by the Jesuits comes in response to tweets and a video statement issued by Fr. Serrano in which he supported the July 15 march in favor of proposed legislation that would eliminate penalties for abortion in three cases: danger to the life or health of the mother, rape and incest, and fetal deformity “incompatible with life.” He invoked the name of “Jesus” in its favor and used language that appeared to paraphrase Pope Francis’ apostolic exhortation Amoris laetitia.

“To walk today for the decriminalization of ‘abortion on three grounds’ (‘#Aborto3Causales’) is very close to Jesus, who loves, accompanies, and doesn’t condemn people in extreme situations. I accompany them with my prayers from Dajabón,” wrote Fr. Serrano on July 15.

In addition to the Jesuit superior, two bishops have already condemned the priest’s statements.

Serrano’s bishop, Diómedes Espinal de León of the Diocese of Mao-Monte Christi, called Serrano’s statements “embarrassing and sad,” and remarked, “Perhaps this priest regrets that his mother didn’t abort him, and maybe that’s why he is a defender [of the proposed law].”

Another bishop, Victor Masalles of the Diocese of Bani, lamented Serrano’s statements and said he had personally contacted him about them. He added, “Never, ever can a prophet preach the cause of death! If that happens, one should not listen to him. He’s a poor uninformed man, and may God have mercy on him.”

The Jesuits’ public rejection of Serrano’s remarks presents a contrast with the order’s behavior in the United States, where numerous Jesuits openly dissent from Catholic doctrine, particularly in support of the LGBT political and social agenda. Among them is Fr. James Martin, who defends homosexual unions openly. Such dissent and heresy against Catholic teaching seems to occur with impunity from Jesuit superiors.

As of yesterday, Serrano remained intransigent in his position, and spoke to the media to reaffirm it, wearing promotional material in favor of the pro-abortion bill.