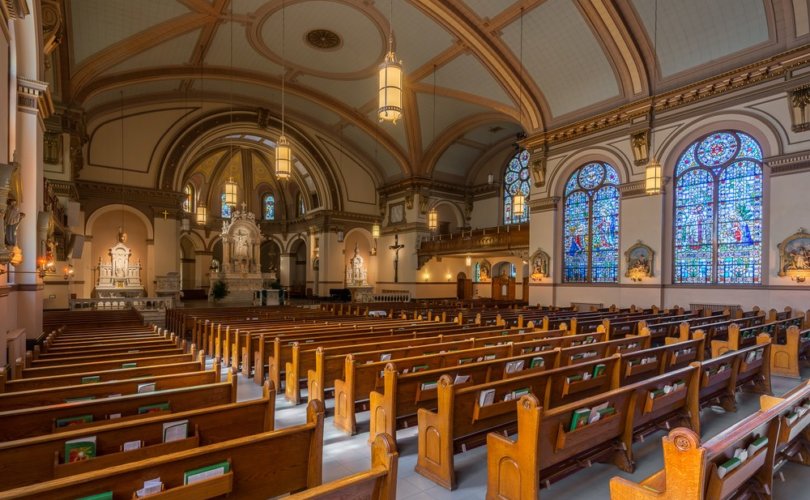 St. Aloysius Catholic Church on the campus of Gonzaga Universityshutterstock.com

December 19, 2018 (LifeSiteNews) – The Jesuit order for decades used Gonzaga University’s campus to house priests who had been removed from active service in the priesthood due to accusations of sexual abuse, according to an report recently published by the Center for Investigative Reporting and republished by the Associated Press.

According to the report, the Jesuit order’s Oregon Province sent to the university at least 20 Jesuit priests who had been accused of sexual misconduct, in most cases while they were functioning in the order’s missions in isolated Alaska villages populated by indigenous people as well as Indian reservations in the northwestern U.S.

The priests were kept on the campus in a building that is called the “Cardinal Bea House,” which is situated on the Gonzaga campus but belongs to the Jesuit order itself, rather than to the university.

According to the report, one of the most infamous abusers who eventually came to live on campus had a powerful supporter – a current vice president of Gonzaga, Father Frank Case, who at the time was the head of the Jesuits’ Oregon Province. In 1989, Case wrote a glowing letter of recommendation for the abuser priest’s appointment to a hospital chaplaincy position, claiming that the priest was in “very good standing” with the order, despite the fact that the priest had already been removed from his assignment in Alaska because of complaints of sexual abuse.

Gonzaga is located in Spokane, Washington, and was founded in 1887 by the Jesuit order. The school is so liberal that it recently blocked a proposed speaking engagement for the conservative and pro-life Jewish commentator Ben Shapiro, claiming it was concerned for the safety of “vulnerable members of our community who may be targeted for discrimination, ridicule, or harassment by others” as a result of the appearance.

The Jesuit order, whose full name is the “Society of Jesus,” was once famous for its defense of Catholic orthodoxy, and its priests were highly valued as missionaries and educators. However, in the last 60 years the order has embraced a far-left political and social ideology opposed to Catholic teaching. It is now famous for priests who openly attack Catholic sexual morality and promote a redefinition of the Catholic faith along ideological lines. Its membership is in steep decline; in Europe and the USA it has only half the membership it did in 1988.

Accused abusers reportedly had access to students, despite supposed measures to prevent it

Although the order claims it took steps to prevent the priests from committing further acts of abuse while on the Gonzaga campus, it has refused to reveal any details of those steps to the public, the authors of the report state. They also cite evidence that the priests in fact did have access to students on campus.

The 20 priests who stayed at the house represented only a fraction of the total number of priests accused of sexual abuse in the Oregon Province, which reportedly totaled 92, far more than any other province of the Jesuit order.

The Jesuits claim that they removed all abusive priests from the Cardinal Bea House by 2016, moving them to the Sacred Heart Jesuit Center in Los Gatos, California. However, even that move has resulted in a lawsuit after a Jesuit who had been an abuse victim and was living at the Sacred Heart Center was not permitted a transfer to another facility when he learned that the abusers would be living there. He reacted by committing suicide.

Decades of coverups and massive payouts

The report reveals a pattern of coverups and ignoring warnings regarding Jesuit priests working with indigenous people, who were particularly vulnerable to abuse.

One such priest was Father James Poole. He was perceived as a “cool priest” who in the 1970s founded a Catholic radio station in Nome, Alaska, that offered a mix of rock ’n’ roll music and Poole’s sermons. People magazine called the priest “Western Alaska’s Hippest DJ … Comin’ at Ya with Rock’n’Roll ’n’ Religion,” in a 1978 article.

However, despite Poole’s hipster image and his reputation in the Jesuit order for inappropriate conduct with women and girls and an “obsession” with sex, he was left at his post for decades as he sexually abused a total of 20 women and girls, some as young as six years old, the article states.

Poole was moved from the radio station after several women wrote to his superior complaining of the abuse. However, the Jesuits allowed Poole to continue functioning as a priest. They Jesuits moved him into a hospital chaplaincy post. It was Poole who received a recommendation for a hospital chaplaincy position by Fr. Frank Case, who was then the head of the Oregon Province of the Jesuits, and is now a vice president of Gonzaga.

“[Poole] is a Jesuit priest in very good standing, and it is my strong expectation that he will serve in such a ministry in a manner that is both generous and effective,” Fr. Case wrote in the 1988 letter. Poole held the chaplaincy position until 2003.

After Alaskan victims filed lawsuits against Poole, the priest reportedly admitted to the sexual abuse in a deposition to the court, but claimed he thought he was “bringing love into the life of other persons.”

The Jesuit order was ultimately forced to pay millions of dollars to Poole’s victims. By 2009, the total payout for all alleged cases of sexual abuse by Jesuit priests in the Oregon Province was reportedly $166 million, leading to a bankruptcy filing that year by the province.

Poole spent many of the last years of his life in retirement at Gonzaga following the payouts. He died earlier this year.

Gonzaga’s president, Thayne M. McCulloh, issued a statement to the press in the wake of the investigative report , claiming he did not know of the presence of sexual abusers on campus, but said that that he had been told in 2011 that some such priests had been there previously and had been moved.

McCulloh expressed grief over the sexual abuse and lamented the presence of the accused priests on the campus, but did not mention the article’s reference to Gonzaga Vice President Frank Case, and his role in facilitating the transfer of Fr. James Poole to his chaplaincy assignment following Poole’s removal from Alaska.

“Listening to this broadcast and reading these accounts is deeply disturbing and elicits for me feelings of sadness, disgust and betrayal that I know must be shared by all of you as well,” wrote McCulloh.

“I feel so much sadness and anger for the women, men and children who were victimized by Poole and others, and all those who have been sexually assaulted by ordained priests who abused their power and privilege,” McCulloh wrote, adding that he and others associated with the university were “deeply wounded by the revelations of the sexual abuse of children, men, and women” by Jesuits.