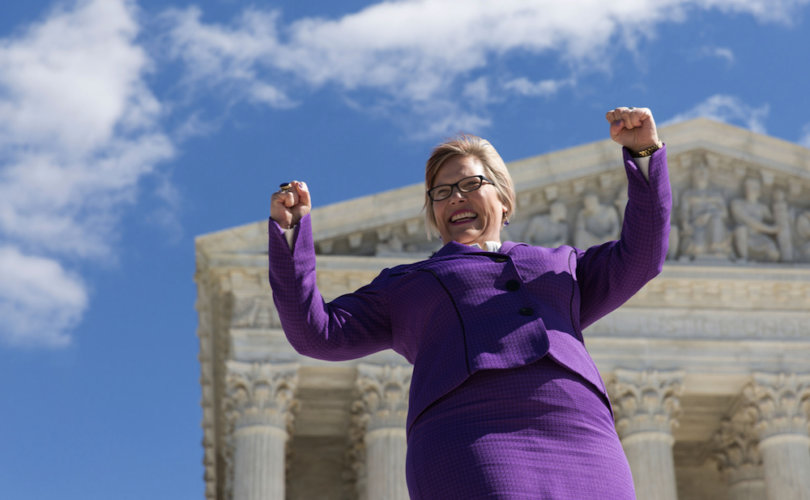 Amy Hagstrom Miller says she is 'mission-driven' by her commitment 'to human rights and justice.'Lorie Shaull

FORT WORTH, Texas, March 4, 2016 (LifeSiteNews) — The abortionist who appealed to the Supreme Court in oral arguments this week says Jesus would supportively hold the hands of women as they abort their children.

Legislators say the laws protect the health and safety of women. Miller says the laws were only passed to create fear and discourage women from choosing abortion.

In an interview with the pro-abortion website alternet.org, Miller explains that she reassures hesitating Christian mothers and encourages them to abort by telling them, “The majority of our patients are Christian. The majority are mothers already.”

“I was raised in a liberal Christian tradition, and I come to the work (at one of her seven abortion businesses) because of that background,” she shared.  “The Jesus that I was taught about would be holding the hands of women inside the clinic.”

Miller puts the law another way.  “Women are forced to look at an ultrasound, forced to listen to a script, forced to endure a waiting period. All of this puts forward the notion that women are stupid.”  She calls the informed consent pamphlets, which give medical data and biological facts, “misinformation,” and complains that they have to let women receive the information.

“Sixty-five percent of the women we serve have one or more children. They’ve all seen an ultrasound before and yet we force them to watch another as if they don’t know what’s growing inside of them,” Miller explained.

She says she strives to provide an abortion facility with “physical surroundings that are warm and comforting with fleece blankets and herbal tea and lavender walls,” and prides herself as giving women clients “freedom to talk about spiritual or cultural concerns… The hearts and minds of women are at the center of who we are.”

“I have really supportive family. … My parents … are very proud of what I do, as are my in-laws. They’re proud of my standing up for what’s right, that I’m taking on bullies, that we are speaking on behalf of those who don’t have a voice.”

She characterizes her abortion businesses as “supportive and nonjudgmental and kind.”