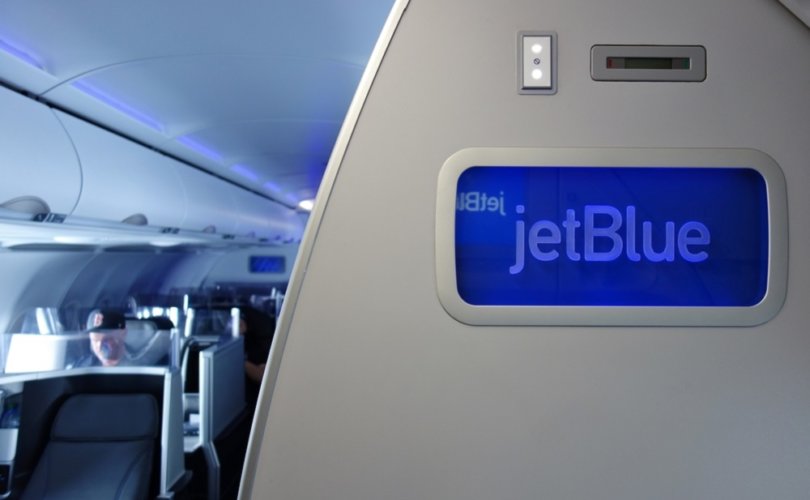 August 21, 2020 (LifeSiteNews) — A New York mother says she and her six kids were treated in an “inhumane” way after being tossed from a JetBlue flight because her two-year-old child kept pulling her mask off.

“She was pulling it off, she had a pacifier in her mouth and they [flight attendants] saw it happening,” Chaya Bruck was reported by Fox News as saying about the incident, which took place on August 19 in Orlando, Florida.

The incident left the mother and kids stranded in a Florida airport for more than five hours.

Bruck said she struggled to have her two-year-old child keep a mask on before the plane departed the gate. This resulted in flight attendants telling her that unless her child kept the mask on, she would be kicked off the flight along with everyone else.

“The way they treated me and went about it is inhumane,” said Bruck in the Fox News report, adding that she was “targeted.”

“My kids started crying. They got scared. They didn’t know what was going on. It was very traumatizing,”

Bruck says she and her husband are looking into suing JetBlue because of the incident.

A video of the event posted on Fox News shows a clip of the ordeal.

The video also shows everyone disembarking the plane, and in the background disgruntled passengers can be heard voicing their displeasure about the situation.

Bruck alleges in the Fox News report that before boarding the plane, she heard on the speaker at the gate that “small children” did not have to wear a face mask if they could not keep it on.

On May 4, the New York–based airline was the first U.S. carrier to mandate that its passengers wear face coverings while boarding, in-flight, and deboarding.

Bruck’s husband alleges that the airline changed the wording of its mask policy for kids shortly after the incident. A screen shot taken by the Bruck family and posted in the Fox News report shows the wording, “Children who are not able to maintain a face covering are exempt from the requirement.”

Bruck claims that JetBlue later changed its face covering policy to what it currently says on its website shortly after the incident to read, “All travelers 2 years and older must wear a face covering over their nose and mouth throughout their journey, including during check-in, boarding, while in flight and deplaning.”

A spokesman for the airline said in the Fox News report that the face covering policy was last updated on August 10 and is consistent with CDC guidelines, which state that anyone over the age of two should wear a mask.

However, a Seattle Times report says JetBlue updated its mask policy just 44 minutes after Bruck’s flight was to have taken off.

The same report also says the incident started on Bruck’s trip to Orlando over a week ago, when she first argued with a flight attendant about masking her two-year-old. According to the Seattle Times report, Bruck said that “the minute” the flight attendant saw her, “he recognized me.”

“I heard him tell the other stewardesses about me.”

Bruck was quoted as saying in the Fox News report that she thinks it’s “not feasible for a child who is 2 years old to wear a mask,” adding that she does not think “under 4 is even possible to force a child to wear a mask, and especially if they have a pacifier in their mouth.”

“A 2-year-old child does not have the logic as an older kid and doesn’t understand the consequences of not wearing the mask,” she was quoted as saying to Fox News.

“I’m not a confrontational person, I didn’t want any trouble, I just wanted to get home with my six kids after a family vacation.”

Bruck said JetBlue did not help her book another flight, and they made it home on a United Airlines flight later in the day.

This is not the first reported incident involving people being kicked off planes due to not wearing a mask.

A report from last week says a Texas woman and her family were kicked off a Southwest Airlines flight because their 3-year-old, who has autism, refused to wear a mask.

Steve Jalsevac, LifeSiteNews co-founder and managing director, said in a recent blog post that the increase in mandatory masking is driven not by science, but by fear and is a change from what “health experts” were saying earlier on.

Dr. Dan Erickson, who owns Accelerated Urgent Care and who spoke at the “White Coat Summit,” whose press conference was banned from social media, said in a Breitbart report that “I’m watching people in their Prius by themselves driving with a mask on. There’s no sense to it.”

A Wisconsin state agency recently required that employees wear masks during at-home Zoom meetings to “visually remind folks that masking is an important part of navigating the business of natural resources during this tumultuous time.”